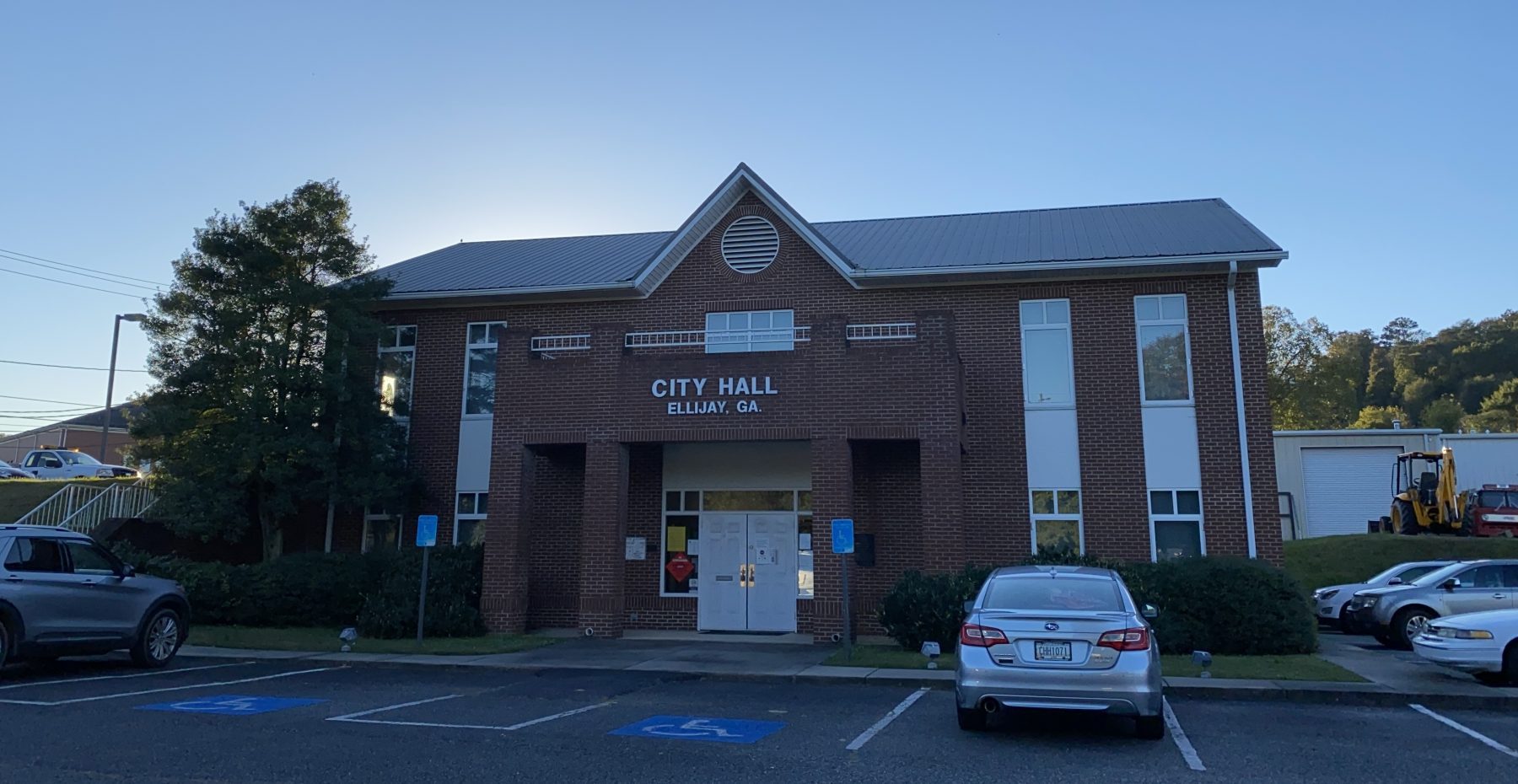 GILMER, Ga. — The Ellijay City Council met Oct. 18 to make a decision regarding the proposed test period for closure of parking on the downtown roundabout. Reese Sanford spoke for the Downtown Development Authority, and gave the council the DDA’s new recommendation.

Sanford addressed the council saying, “As requested at the downtown traffic workshops [that] city hall had this summer, the DDA’s been doing due diligence on the roundabout parking.” Sanford noted that the DDA recommendation is a product of consultation with the joint development authority, the police department, the city council, and local business owners.

He explained that the consideration first arose as a way to improve public safety in the downtown area, citing three incidents on the roundabout in the last year: “Third party reports have suggested that the traffic congestion downtown is a long term business risk. The easiest solution is to move parking away from traffic and away from the pedestrians.” He also mentioned that the DDA has already requested more signs to direct visitors to safer parking locations, like behind Dalton State College. However, when he went to check, Sanford says, “Of 230 [parking spots], only 32 were in use. If we can guide cars to this lot, we can alleviate a lot of our issues.”

The DDA, as Sanford brings up, had previously published a recommendation to shut down all roundabout parking; however, “as a result of the September town hall, we have revised our original proposal … and this is the result of the community input we received at this meeting.” Sanford then explained the revised proposal: “We will not touch the nine spaces, which includes the one handicap space, on the north side of the roundabout … Our revised proposal is to barricade parking on the nine spaces on the south side of the roundabout, and the parallel spaces on River St., just after River Street Tavern. The businesses in these areas are supportive of it, and are very interested in seeing what they can find in the trial period.”

Sanford noted that parking is not being reduced, only reallocated. He says the period might even increase business activity, suggesting that outdoor dining, artists, or walking tours could occupy the new space: “If this test period goes well, and leads to a desire for a long term change, paving over the spaces is not the only solution.”

Sanford finished, “We are proposing a test period from Oct. 23 to Jan. 2. The spaces will be blocked off 7 days per week.” He says then the DDA will host another town hall, and convene to settle on a final opinion to present to the city council.

After his presentation, the council members took the opportunity to raise their concerns. Kathryn Lancey spoke first, wondering why the DDA revised their original proposal. Sanford responded, “Why force an experiment on some people, when there’s others that are offering their space?”

Tom Crawford brought up the community saying, “I’m kind of astonished that you’re making a recommendation after the town hall was a resounding ‘no.’” Sanford replied by mentioning that not all citizens go to town halls and the businesses are willing, but Crawford continued: “If you’re gonna do a test period … why on God’s earth do it at the busiest season of the year?” Both Sanford and the council members discussed these concerns, but ultimately decided to close parking.

When time to vote on the issue, Kevin Pritchitt asked to amend, saying, “I make a motion to [limit the] downtown parking elimination test for River St. only.” The motion was unanimously passed, and the parking spaces on River St. are planned for closure beginning Oct 23.

ELLIJAY, Ga. – More than just citizens living inside the city limits, people from East Ellijay and all over Gilmer County outside of either city’s limits have been voicing opinions and concerns over the loss of parking on the square and down River Street.

This Monday, October 15, 2021, will see the Ellijay City Council hear the proposal from a representative of the Downtown Development Authority (DDA) and has an agenda item to take action on the subject. The agenda lists this as “Downtown Parking Elimination Test.” The idea is to test how the area will respond without parking through Light Up Ellijay in December. The Mayor’s Report in the city council notes that this will eliminate parking “on the roundabout and River Street.”

Discussion has risen from the DDA, but has found stark opposition from certain members of the public. From very specific concerns of elderly and handicapped people looking to keep the close by parking for places like the Cantaberry Restaurant, Blue Ridge Olive Oil Company, Ellijay Wood Fired Pizza, River Street Tavern, and others to general concerns about eliminating any parking in such a busy area of the city.

Those speaking in favor of the elimination have quoted public safety concerns and traffic flow. Accidents have occurred in the area and comments have been made referencing these incidents when someone may pull out or back out into traffic. Others have complained about how difficult it is to back out of the lots on the square.

Discussions have also come from some to convert the roundabout parking into all handicapped parking spaces and marking off several spots to allow for van unloading from the sides for wheelchair users.

The Downtown Square already has posted speed limits signs along River Street and the city has also put up flashing signs in the past warning drivers of their speed as they cross the bridge on River Street.

Eighteen parking spots isn’t a large number compared to the lot sizes like the one behind Dalton State College or the one behind the courthouse next to the Tabor House, but the main push to keep the spots has focused on the needs for closer parking for older people. Four years ago, in 2016, research was shown in the Gilmer Board of Commissioners meetings as the county was losing its hospital proving Gilmer had 25% of its population as 65 or older. Since the COVID-19 outbreak, research has proven that the consistent occupancy of Gilmer County is increasing from more and more people moving here along with more and more tourists visiting.

The question of the day and the question behind the parking spots on the roundabout and down River Street, ultimately, has very little to do with parking, but has everything to do with traffic and congestion. Some downtown business owners are also pushing to keep the roadside parking to allow for older citizens to have easier access, but also to allow for those who may see an open spot and are only looking to quickly get in and out of one store instead of touring the downtown area.

Officials have emphasized that the action taken, if approved, is only a test run. Discussion has continued to run rampant among how the city would block off the spots, what kind of image it gives to visitors, what it would do to locals, how it would affect businesses, how it will change the look and feel of the downtown area. Discussion will continue on Monday, October 18, 2021, at 5:30 when the City of Ellijay enters its workshop right before the 6:00 p.m. meeting.

ELLIJAY, Ga. – Highway 382 has seen construction on the roundabout project to connect a direct route to Highway 515 for nearly a year. The Georgia Department of Transportation project began in the latter half of 2019 despite the COVID-19 outbreaks and is still continuing today. 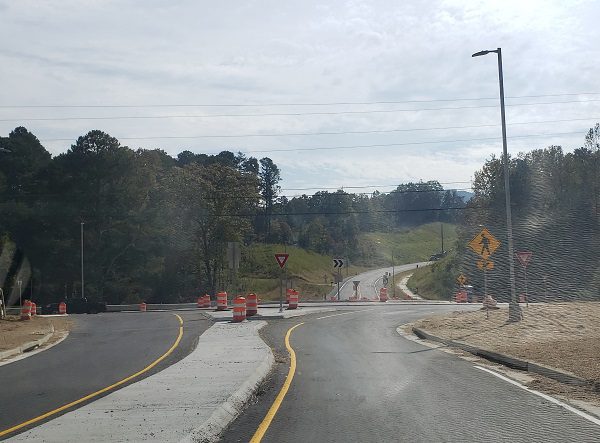 A view from entering the roundabout from Highway 382 and heading towards Highway 515.

However, the project has hit the point now where all traffic has been moved from the old route passing directly beside Green’s Country Store to the new path curving off just past Dollar General, if you’re traveling towards Ellijay.

The stop signs at the old intersection have been removed and traffic is now fully engaging the roundabout with the Highway 382 extension in use as well.

Utilizing the extension that now crosses Old Highway 5, via the roundabout, and continues straight towards Highway 515 instead of merging with Old Highway 5 before a a small connector split off to intersect 515 at Powersports Drive. 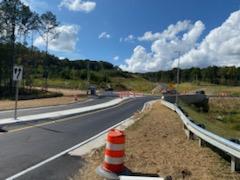 The new direct path intersects Highway closer to town at the Gun Pro Shop. However, the intersection is not a traffic stop.

Instead, drivers traveling to 515 along the new connection are forced to turn right (Southbound) away from Ellijay before using a turn lane a few hundred feet down the road in order to turn back towards Ellijay.

The project reaches all the way back to 2016 when the Gilmer Board of Commissioners and the City of Ellijay received letters from GDOT about the coming project. Original seeking letters of support, discussion later turned towards lighting and maintenance costs for the roundabout itself as GDOT wanted the county or city to take over those costs while they continued paving maintenance for 382 itself. 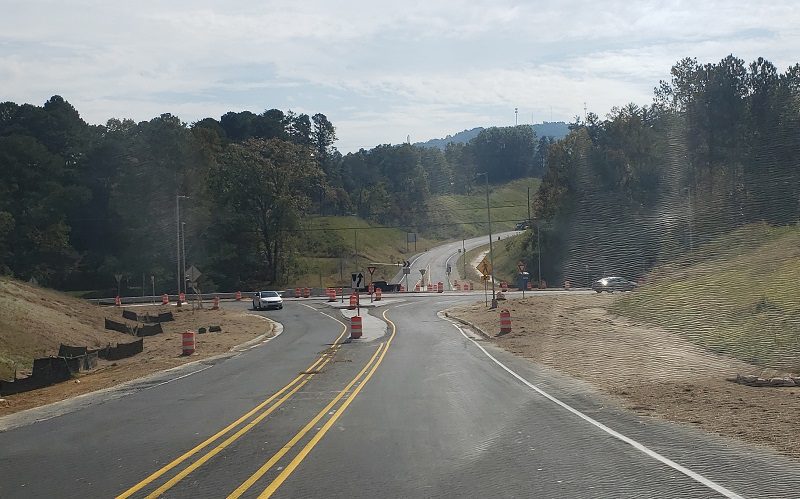 GDOT has been working on the roundabout project since last year, but plans began back in 2016 with letters to Gilmer County and the City of Ellijay.

Current understanding is that these are the remaining steps in the project as GDOT has put some lighting on the roundabout for night traffic, but it was not seen operational over the weekend.

While the project continues these steps and clean-up, the larger portion of the project is now complete and has begun traffic flow only in the last couple of days. GDOT stated earlier this year that expectations were to complete the project over the summer. The project has seen delays through weather over the last year, but no specific details are available at this time on whether returning COVID-19 numbers or increasingly heavy rainfall in some weeks were the cause of any major delays.