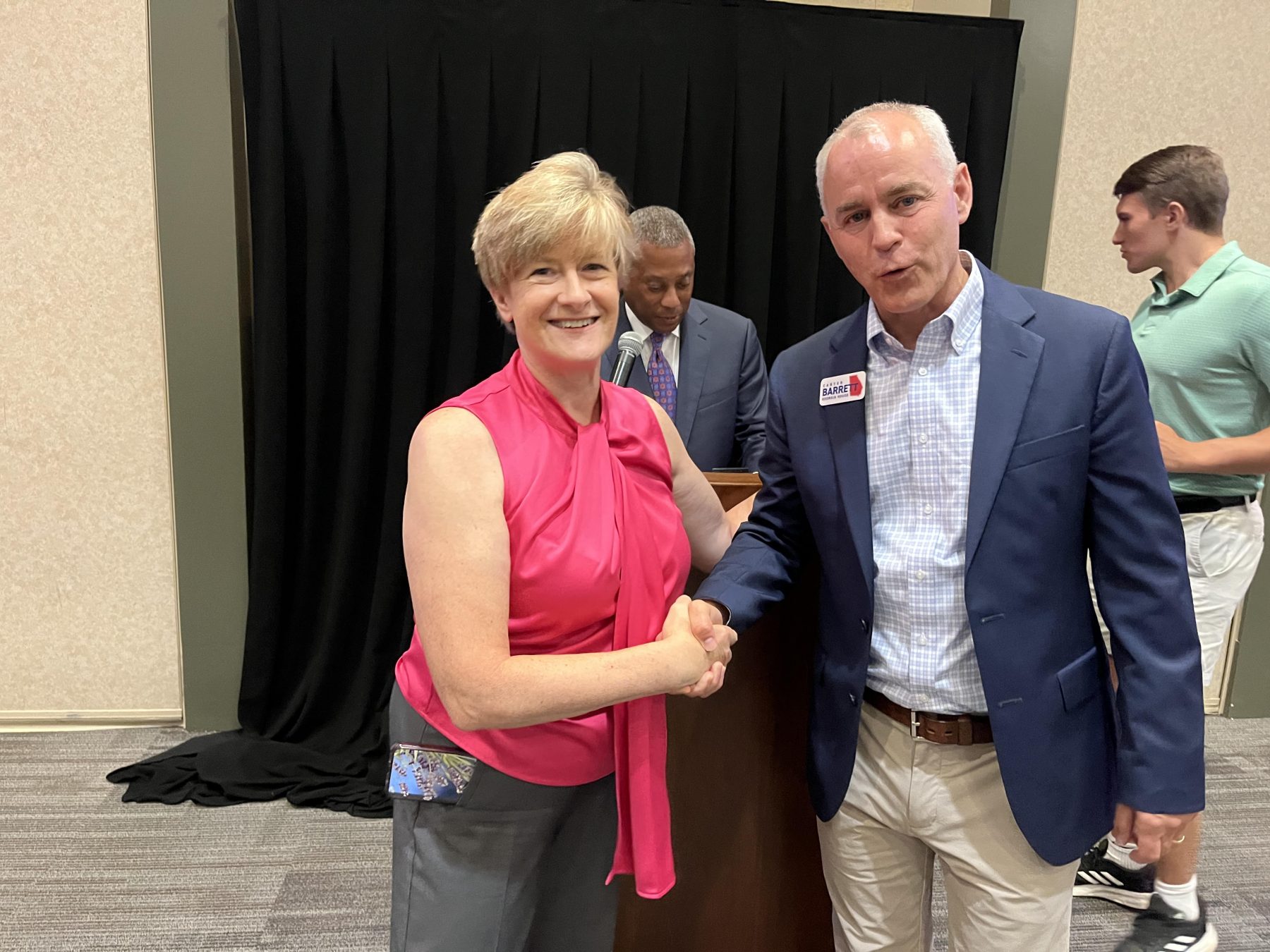 Both candidates threw a few sharp elbows early. Some landed, and some didn’t. But no blood was shed and there was no knockout punch. Like the 90+ degree heat outside the conference center, things eventually cooled down.

First, though, both said they would like to clear the air regarding a few salvos fired at them during a campaign that both described as “rancorous.”

Gilligan said one of the lies told about her by the Barrett campaign is that “I don’t support veterans.” She pointed out she and her husband are veterans, her daughters are veterans and their sons-in-law are veterans who graduated from the Air Force Academy.

Asked what they would do to stop high-density development, Barrett didn’t offer a solution but did say, “I don’t want this to be a community you come to educate your children and make a pot full of money then retire somewhere else.”

He added that he does not support high-density development. “I want this to be a truly great community  where you wouldn’t even consider retiring somewhere else.” He pointed out that he helped lead the Envision 2020 comprehensive plan 15 years ago and is today working on the comprehensive plan for the future.

Gilligan said high-density development has “Caused our taxes to increase, our roads to erode and has driven local government into debt. But seven years in the legislature have taught her that there is little state government can do to stop it. “That is the job of our county commissioners,” she said.

The candidates found common ground when asked if there was fraud the 2020 election. Barrett said, “There is no question in my mind whatsoever there was fraud in that election. There was rampant fraud.” He also said he watched the film “2,000 Mules” by Dinesh D’Souza which appears to depict massive evidence of fraud and called it “compelling.”

Gilligan said, “We have evidence of people casting a vote in another state and still voting here in Georgia. We have ballots that were illegally harvested and stuffed into ballot boxes. I signed onto a petition for a special session so we could assess what was going on.”

There was also common ground on their opposition to masked mandates and the need for school choice.

The candidates were asked if they could only get one piece of legislation passed, what would it be.

Gilligan has made school choice her mantra for her seven years in office so she emphatically stated, “If I could only get one piece of legislation passed, it would be school choice.  We need school choice. Right now there are thousands of Georgia children stuck in failing schools. It is unconscionable. For the economy to thrive, you need an educated work force. You need educated students to break the cycle of poverty by getting them out of these failing schools and state dollars need to follow them.”

Barrett considered several important pieces of legislation, he would like to get passed, including term limits, school choice and the state income tax. “That is a tough one,” he said before stating, “I would agree with Sheri 100 percent that school choice is paramount.

The winner will face Democrat Sydney Walker in the November General Election.