PICKENS COUNTY, Ga. — The Pickens County Board of Education heard from Pickens County School System employees who discussed how the school district is tackling important issues. School Nutrition Director Beth Thompson spoke to the board about how the schools’ are handling shortage and cost-related problems. Notably, Thompson explained the end of automatic free meals, but shared that prices will not increase. Pickens High School Principal Chris Wallace also discussed new plans to improve safety throughout the county. 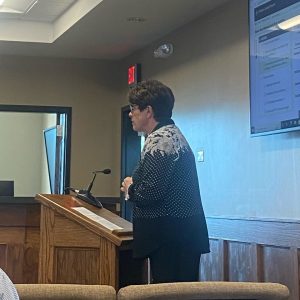 Nutrition Director Beth Thompson discussed several topics with the board.

Then, explaining how student meals will be handled during the 2022-2023 school year, Thompson told the board: “We are returning to the normal, pre-pandemic national school lunch program, school breakfast program, and this does mean that meals will not automatically be served to kids at no charge.” Despite the return of paid meals, and recent inflation that has caused food costs to increase significantly, Thompson emphasized that the school district will not be raising student meal prices. While each meal costs around four dollars to produce, she said, students will only pay from $2.15 to $2.45, depending on the school they attend. Thompson emphasized the decision to keep prices the same as “the right thing to do.” She also mentioned that families will once again receive applications for free or reduced meal prices and noted a new online application that will be available this year in an attempt to make it more accessible to all families. It was also noted that the end of the pandemic-era free meals was not a local decision, but came from the federal level.

Thompson also recommended the approval of a contract with Sysco Food Services of Atlanta that will help address issues with access to groceries in Gilmer, Fannin, and Pickens County. Later in the meeting, it was unanimously approved by the board.

Pickens High School Principal Chris Wallace also spoke to the board. He took time to explain the safety approach of “prevention, preparedness, and response” and discuss upcoming plans. Wallace told the board, “We’re here for school of course, curriculum, instruction, all of that is really important, but that doesn’t really matter if you can’t keep kids safe.” He said meetings are already being held to discuss safety related topics like communication during emergencies and planning with the Pickens County Sheriff’s Office and School Resource Officers (SROs). Wallace also noted that there is evaluation underway to examine current procedures and improve upon what is lacking. As an example of implementing new safety procedures, Wallace explained a plan for Pickens High School that will stop unsupervised class transitions between buildings. Further, he cited the presence of a trained SRO in each school, helping students create “a habit of vigilance,” and planned training sessions inside Pickens facilities.

During the meeting, the board also approved the tentative budget for the fiscal year of 2023, as well as salary schedules. Superintendent Tony Young commented on the salary schedules, saying “This year’s schedules will reflect an increase in pay for all classified staff. Certified staff will receive a $2,000 annual pay increase from the state, which our board will add to at the rate of 10%, which will also become a permanent part of their pay scale moving forward … I would also like to point out that, including the bonuses the board has approved over the last two years, every staff member in this system has received additional pay, which I believe reflects the value this board holds toward its staff.”

The board approved an agreement with Georgia Southern University and updates to sex education curriculum during the meeting. They also recognized the historic achievements of Pickens 4H competitors and heard updates on the county’s summer camp program.