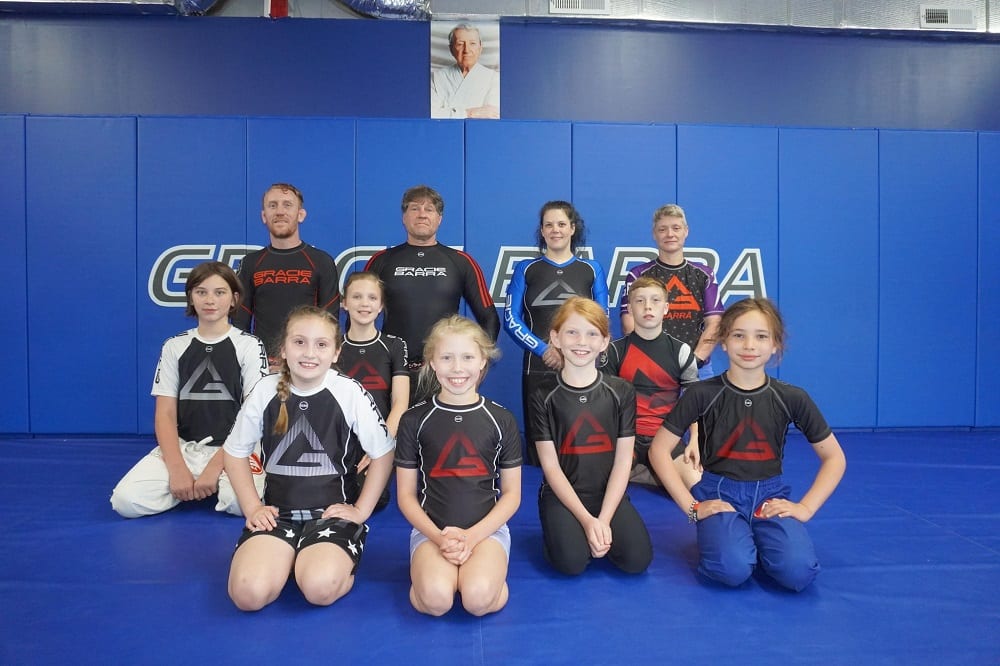 Is it medal or metal? What type of gold are people bringing home from Ellijay’s Gracie Barra Brazilian Jiujitsu gym.

On Saturday, May 22, 2021, Braelyn Nelson, Maddie Harper, Emma Lowman, Ryleigh Monteith, Tucker Cain, John Tippens, Jaydn Beattie, Jolene Lemey, and Augustus Lemey gathered as a team to compete at Tap Out Cancer – a jiujitsu competition aiding in the fight against cancer. Tap Out Cancer provides funding to nine different beneficiaries, each working to provide research and healing for many different types of cancer. The Atlanta event raised $97,600, with Augustus and Jolene Lemey of Gracie Barra Ellijay raising $1060 for the event. 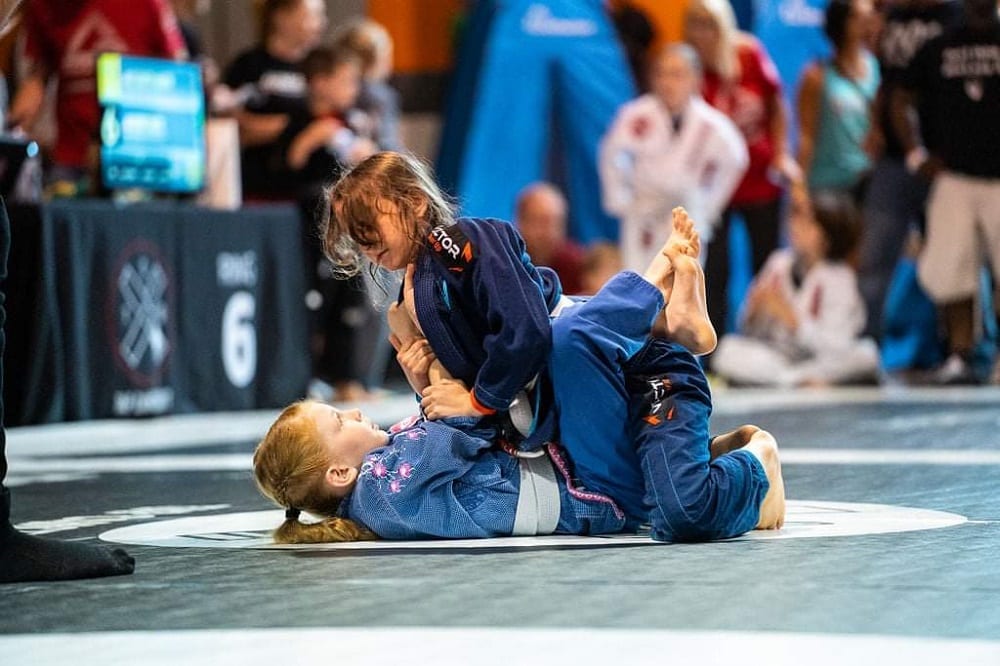 Maddie Harper, bottom, is in a defensive position against her opponent during the Tap Out Cancer competition on May 22, 2021.

According to Paige Galitello, one of the gym’s three instructors, “Each of these young jiujitsu practitioners and their families have dedicated countless hours to their training each week, and their hard work was obvious to everyone in attendance at the tournament.”

This, in and of itself, is cause for celebration. Galitello said, “For the coaches, it is truly a joy to watch the cohesion and strength of Gracie Barra Ellijay’s team grow with each training session leading up to an event like this one.”

Just walking into the gym and speaking with two of the instructors, it’s very easy to see such a difference between them. Coach Kerry Sweat has such an overwhelming excitement for the martial art of Brazilian Jiujitsu, for the Gracie Barra family, and for what the gym has and will become. Every word from his mouth compels you further into the martial art and the depth of commitment that is both required and fundamentally built into program. Coach Paige Galitello has a far more reserved, yet intense, demeanor. A competitive spirit runs deep. It is apparent as she speaks of the competitions and training she goes through. That fierceness walks right alongside a very mindful and caring attitude as she spends far more time talking about the kids in competition, other adults, and the confident culture that propagates within the program. 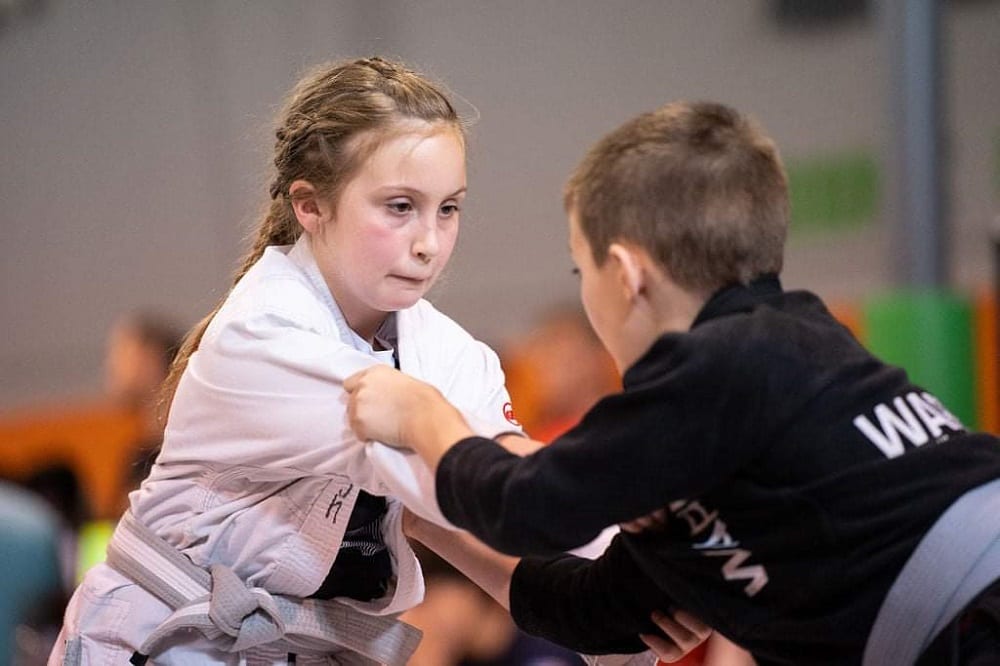 Ryleigh Monteith, left, is grabbed as she grapples an opponent in the Tap Out Cancer competition on May 22, 2021.

That confidence comes from, as she says, “having tools in the toolbox.” This metaphor she equates to the the training and capabilities she has learned that make her feel safer.

Kerry Sweat, one co-owner of the Gracie Barra gym and also owner of Sweat Plumbing, said, “I never intended on owning this. I never practiced martial arts in my entire life.” A little before the age of 50, Sweat began learning martial arts skills with an MMA group in Blue Ridge, Georgia. Learning some Tae Kwon Do, Akido, Jiujitsu, Sambo, and Muay Thai, he gained a very eclectic introduction from whoever was available. As he says, he got beat up for a year.

But as many in the group fell away following life’s path, Sweat held one specific man in memory, a man that held his own with every person in the group. He was a black belt from the Gracie Barra group. Some time later, the group started focusing on just Brazilian Jiujitsu and Sweat was introduced to Professor Fabio Costa, a 4th Degree Black Belt that was promoted to Black Belt by Master Carlos Gracie, Jr., in 2004. Costa is currently a 25-year-veteran of Jiujitsu and the Gracie Barra Regional Director of the state of Georgia.

Sweat said that meeting Costa was the moment when he knew this was it. This was the guy.

Becoming a Gracie Barra instructor has a great focus on the organization’s core value, “Make the world a better place.” A fully defensive martial art, Brazillian Jiujitsu sets these kids, and adults who study, into a self-defense mentality that focuses on defusing situations before they become more. However, one must also be able to defend one’s self if someone doesn’t listen. It is all a part of, as Galitello said, “having tools in the toolbox.” 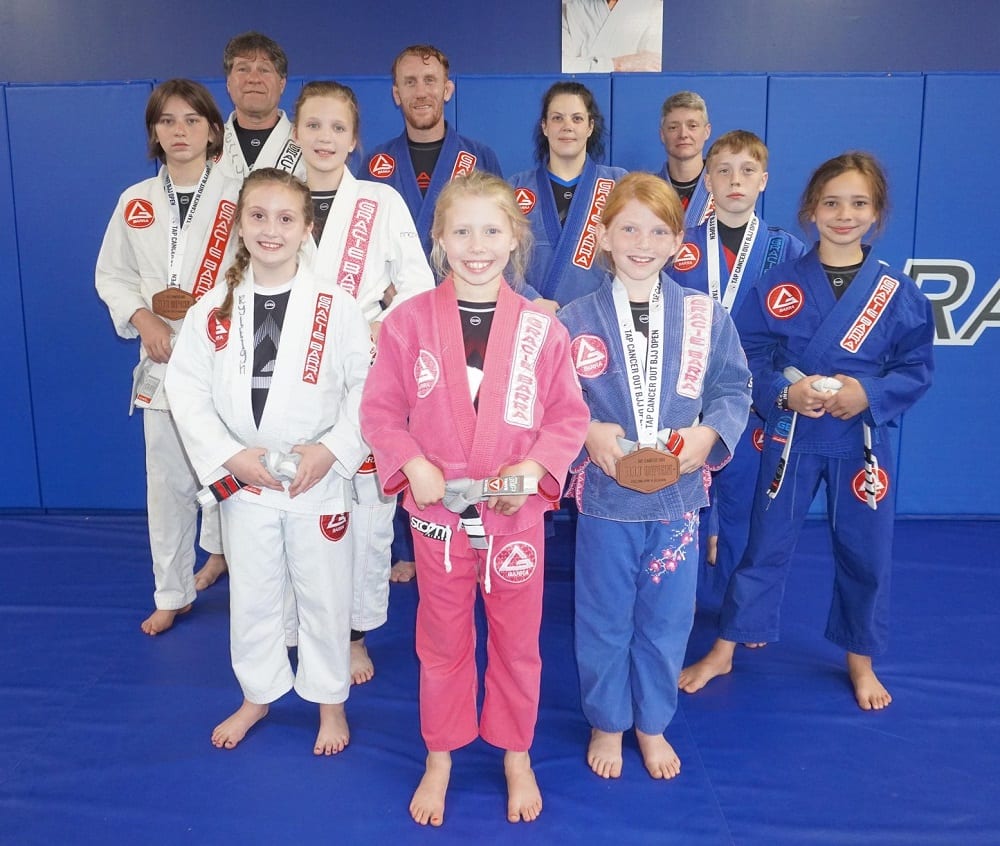 Sweat said, “We have to serve the kids in the community… What better thing to do than teach kids how to defend themselves?” He went on to add, “Their skill level is going to be so good after they do it a couple years that they will never have to use it the rest of their lives. They’ll be like Jedi Knights, ‘We don’t want any trouble here.'”

Sweat recalled a story of one student he had and the teachers who shared their story of this student that went into their class. Apparently, this student would find a bully or troublemaker that had been picking on people in class, and sit right next to them. Within a day, Sweat recalls, “They’d be playing Pokemon or something together and that boy would never pick on anybody again.”

He attributes stories like this to not only the defensive and defusing attitude in situations, but also to the activity of practicing this martial art. He considers that maybe this bully isn’t comforted, encouraged, or even touched in positive ways at home or with certain people. Brazillian Jiujitsu is a very contact-heavy and close-in activity. Being in constant contact with fighters, training with each other, and growing together, the positive contact, like shaking hands or even a pat on the back, it comes with that training and there is a respect that grows from it. These concepts permeate a person and show through in every interaction.

Students are working hard to achieve their goals and test themselves in tournaments. Galitello expresses this growth best saying, “For our young competitors, these types of competitions are fun and challenging events which allow them to showcase the results of all the hard work that they have put in while preparing for the tournament. Our motto ‘Win or Learn’ always holds true.”

And that motto is not just words. Sweat warned that anybody that walks in is going to get put down when they first start. All these people know so much and have trained. You’re going to learn and grow through those trainings and matches.

After attending a Kids Ferst meeting, Sweat was encouraged back in the beginning of the gym to teach kids and help them grow. He had a goal to have kids in the program that you wouldn’t need to test or examine closely to know they were better. He wanted kids in the community that you could just look at and know that they are different.

However, to emphasize that goal and more, Galitello noted that every member on the competition team had straight A’s this semester. So, they may be bringing home medals in their competition, but they are also continuing their efforts in school and in life. The kids sign contracts and agreements for their commitments.

Galitello says it’s also about working with the kids’ families. Having another group to lean on and having everyone support each other in their efforts to help these students become better people. Having people who “care” outside of a student’s immediate family is a major difference-maker as these instructor have techniques in the program to build the students in so many different ways. From changing partners mid-session to make sure every knows and gets used to each other to helping with grades or just having someone to talk to when needed, these methods help to build this “family” within the Gracie Barra gym. 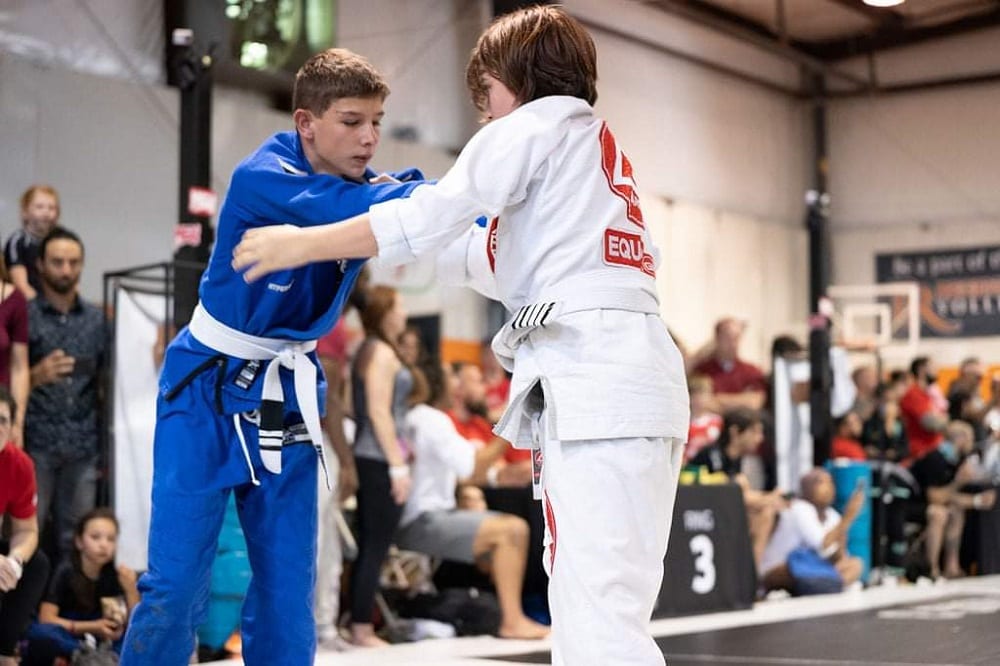 Augustus Laméy, right, grabs the collar of his opponent, a common move in a type of Brazilian Jiujitsu, during the Tap Out Cancer competition on May 22, 2021.

Sweat and Galitello are not the only instructors at the Ellijay-based gym. Both instructors had one more name in their minds when talking about the kids competitions. Another co-owner and instructor with a massive influence in the instruction of the youth is Justin Guise. Guise is the gym’s Head Coach, according to their website. Galitello says he is also her instructor.

“The kids are just drawn to him,” says Galitello as she explains the monumental impact that he has in the gym. A key figure, he not only leads and teaches some of the instructors, he also builds into the fundamentals that these kids establish their entire studies on.

Every single time a student of the art comes to a class they “level up,” says Galitello. Whether they are young kids to older adults, everyone grows.

She joked about Guise saying that she drags him around helping to coach for tournaments. But the common verse in the whole gym spreads to these instructors, they are constantly giving credit to other coaches and talking about how each shares in the instruction and learning. Guise instructs the kids, but he also teaches Galitello. Galitello competes as well as instructs competition classes. Sweat shared that even he learns from Guise, a fellow co-owner of the gym.

He went on to add that this one gym isn’t the limit in this program. Constantly communicating, gyms across the region have open mat times and share their facilities for those seeking people to train with. Just as they teach the kids to push themselves further and use competitions to practice against new people, so too, do they themselves seek out new people and training partners.

Training together with the same people can leave you unsure of where you stand. Galitello notes that these students who compete get to effectively train with people from all over when they go to competitions, they train together and prepare together, it becomes a group celebration sharing in the glory of any success. But, coming home, it means more real applicable knowledge and experience that one student can share with another. There are instructors in the gym, but everyone can teach something. 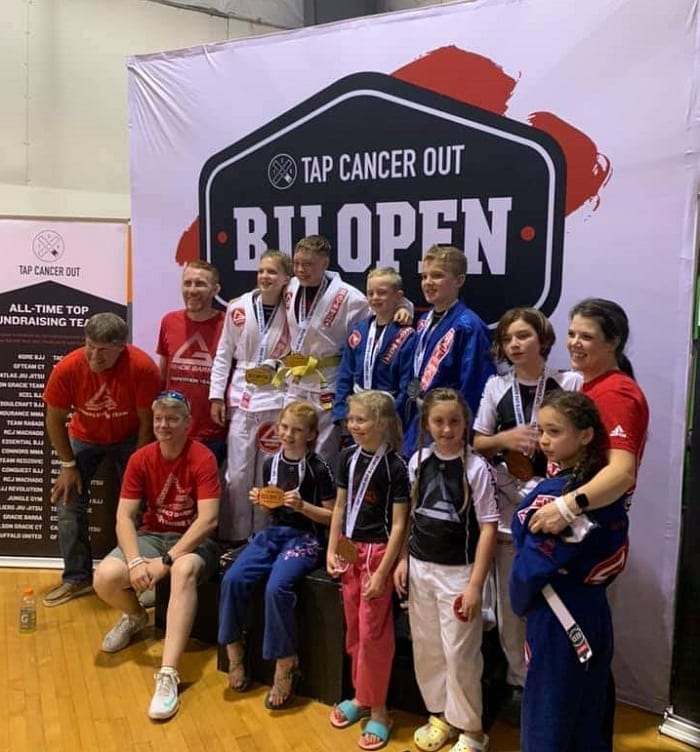 This comes from the culture they have built. Even Professor Costa visits gyms like Ellijay. Sweat may be a instructor, but he learns from his superiors, he continues lessons through digital training videos, he trains with those in his gym and in other gyms, as does everyone. They are constantly building and improving. Galitello has trained with men and women in the gym as she has prepared for higher weight classes in competitions. The same way, Guise is a key part of a larger effort in the lives of younger students, and the whole “family” shares in the success.

Coming home with these medals, Galitello said she hasn’t seen these kids’ egos explode. Instead, she has seen each student sharing their experiences.

“This worked better when I was in this position.” “Try it this way next time.” “Avoid this move when you’re doing that.” These are examples of the type of coaching they give each other now.

It is a fundamental idea that each instructor has ingrained into the fabric of the experience. Sweat shared stories about how he has traveled and met many people, and one things he knows, there is always someone better. Humility is something learned.

Practicing, competing, and achieving that gold is a feeling unto itself. But Sweat says it’s only fuel to push farther, you got gold and were the best… of those who competed. It pushes you to train harder to achieve more in the next competition, to seek out others and test yourself against them.

Sharing in the glory of gold, silver, and bronze, students become athletes become artists, Martial Artists. But along the way, something else is forged.

It is a common phrase that most have probably heard, “What are you made of?”

On May 22, 2021, seven students came home to the Gracie Barra Gym in Ellijay with medals around their necks. Yet, training, growing, and competing in this gym, there comes more metal inside than what can hang on a ribbon.