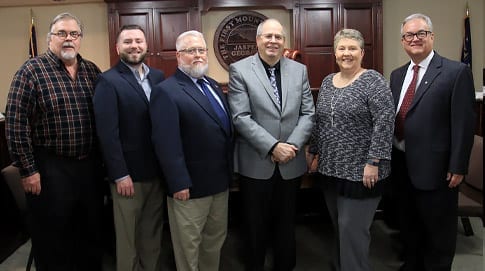 JASPER, Ga. – The City of Jasper is holding meetings with citizens to discuss plans to move forward with a major increase of its Millage Rate. 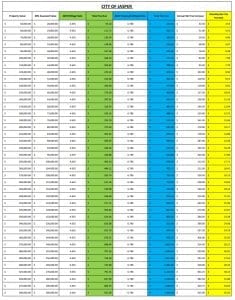 A comparison sheet shown by City Manager Brandon Douglas in the September 24, 2020, public hearing for the millage rate.

According to City Manager Brandon Douglas, he met with the finance department and department heads, they found that normal operating costs produced a preliminary 2021 budget held a deficit of roughly $551,000. He also noted that indications pointed to a two to two-and-half percent increase in revenues while expenditures increase at three to five-and-a-half percent per year.

Douglas said, “That is not a sustainable financial model.”

He went on to say that the city needs corrective action for the finances. The gap between revenue and expenditures that the city is seeing has come from not correcting these issues sooner.

Douglas also noted the importance of property taxes as they make up 30 percent of the total revenue budget for the city. Many of the sources of revenue that make up the other 70 percent are unknown or not directly controlled by officials and the city. This puts the point of the property tax as something directly controlled by these elected officials.

There will be another meeting of the city at 5:30 p.m. on October 5, 2020, to hear more from the public on the proposed millage rate as Douglas stated, “It is staff’s goal to work with the elected officials through this public hearing process to recommend and adopt a millage rate that is reflective of providing a balanced budget. It is not our goal to just simply adopt a 6.78 millage rate.”

He noted that by the October 5 meeting of the Jasper City Council, he hopes to have gotten with officials through their committees to identify “ways to reduce certain preliminary department budgets.”