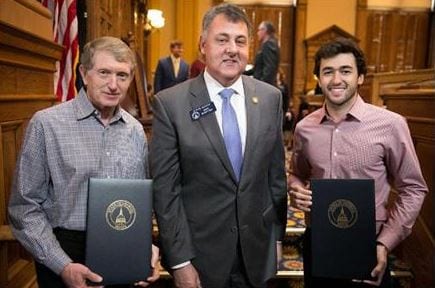 The pace during our seventh week picked up yet again, as Crossover Day is nearly here. There was movement on several of my bills this week, and I had the chance to welcome some honored guests.

I am very happy to announce that Senate Bill 402, the Achieving Connectivity Everywhere (ACE) Act, passed the Senate unanimously with bi-partisan support on Friday. This bill is a major step toward bringing broadband access to unserved and underserved areas across rural Georgia by laying the groundwork for private investment and public-private partnerships. SB 402 provides jurisdiction to the Georgia Technology Authority (GTA) to evaluate local communities across the state and create plans to implement broadband projects. The bill also contains incentives for local communities, such as a new community designation, which will be called “broadband ready.” A broadband ready community will obtain this new designation through the Department of Community Affairs (DCA) and it will allow them to qualify for grant programs. This will minimize hurdles in the permitting process and enable the opportunity for a tax exemption if the community’s population is below 50,000 or is 40 percent unserved. In addition to the local benefits contained in SB 402, it also increases coordination among DCA, GTA and the Georgia Department of Transportation, allowing agencies to expand fiber optic cabling through the use of existing infrastructure.

Two other bills I sponsored that also relate to the expansion of broadband in rural Georgia took a step in the right direction this week, as they were passed out of the Senate Regulated Industries and Utilities Committee. After several days of hearings, receiving input from local communities, private companies and key stakeholders, SB 232, the Facilitating Internet Broadband Expansion (FIBRE) Act and SB 426, the Broadband Infrastructure Leads to Development (BILD) Act, are now one step closer to being heard and voted upon by the full Senate. SB 232 expands access to public rights of way and sets regulations for Georgia’s electric membership cooperatives. SB 426 relates to local governments and their ability to place regulations, fees and taxes on private companies seeking to use the public rights of way to expand broadband access. I look forward to having both of these bills up for a vote on the Senate Floor next week.

In addition to broadband is another bill I sponsored that passed out of committee this week, SB 425. The bill revises the code by adding a new classification of land surveyor. The new classification will require fewer qualifications and is being done in an effort to attract more individuals to the profession. Current law for qualification sets a very high standard and this has limited opportunities for those interested in becoming land surveyors. In addition, the high standard has also placed a burden on local governments seeking their services. SB 425 aims to resolve each of these issues.

This week, I was also given the distinct honor of welcoming some of Dawsonville’s finest to the Senate – NASCAR legends Bill and Chase Elliott. Additionally, I was happy to spend time with Youth Leadership Dawson when they visited the Capitol.

While week seven was full of action, we still have a long way to go in 2018. If you have any concerns, comments or questions regarding my bills, or any legislation facing the Senate, please feel free to contact me. It is a pleasure to serve as your Senator, and I look forward to keeping you updated as the session progresses.