ELLIJAY, Ga. – Last week’s news of a teacher’s arrest on charges of allegedly carrying out an inappropriate relationship with a student resulted in the following day a letter of resignation submitted to the Gilmer County Board of Education.

This culminated at the Board’s meeting when voting on personnel. Nathan Sutton’s, the teacher in question, resignation was a part of the agenda item.

Watkins said he wanted the Board to not accept his resignation as it allows him to part from the school board with a letter of resignation rather than being fired for the incident. Watkins referenced another recent resignation, saying it was similarly a situation of allowing a resignation before an investigation could prove any improper behavior.

While the Board was originally split with Board member Tom Ocobock saying he agreed that he wanted it to say on record that he was fired. Ocobock also indicated that he didn’t want Sutton “let off” with a resignation after the alleged incident. This was stressed even further as they both noted Sutton’s alleged confession. 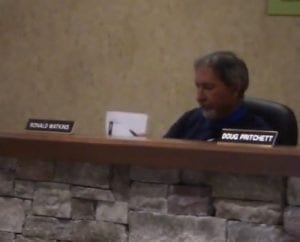 Gilmer County Board of Education, Board Member Ronald Watkins

However, Superintendent Dr. Shanna Downs suggested to the board that the school system would proceed with whatever they voted, she counseled them to accept the resignation on the grounds that the if the Board wished to proceed with firing him instead, they would reject the resignation and continue paying Sutton as a teacher and keeping him as an employee, at least on paper, until the proceeding could go forward with the schools firing policy. With the investigation and the school board’s process to fire him. It could take up to a couple months or even 90 days was suggested as an extreme possibility.

Some of the complicating factors revolved around the victim not being a student anymore, new policy updates for Title 9 with the schools, and proceeding with the termination in face of a resignation letter.

Downs said that she has already filed paperwork with the Georgia Professional Standards Commission (GaPSC) for an ethics complaint on record regarding the incident, and that the police would be moving forward with their investigation. The complaint with the GaPSC also requested to pull Sutton’s certificate for education.

Title 20, Education, of the Official Code of Georgia Annotated (O.C.G.A.), outlines the legal guidelines, which govern the state education program.

Downs added that the resignation allows the board to separate from Sutton immediately without the full process of investigating themselves and firing Sutton on those grounds. She said that as far as him going to another school or getting another job, there was little difference in firing Sutton or accepting the resignation. The difference was in paying him until they could fire him or terminating the contract now. 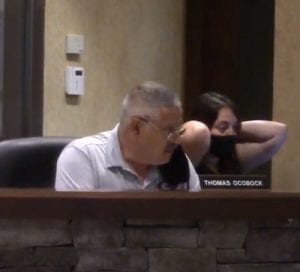 Gilmer County Board of Education, Board Member Tom Ocobock

Ocobock said that he still wanted him fired, but with Downs saying she had filed the complaint and as long as he could not go to another school for a job, he was okay with the resignation path of separation.

However, Watkins still pushed for the official process saying that he was really discouraged that he has had two people know that will be allowed to resign instead of being fired. He stated, “I want to know how bad something has got to be to where I can fire someone.”

Indeed, with a motion on the floor to accept the resignation, Watkins made his official motion to proceed with the firing process. The motion did not receive a second and died. However, the Board then proceeded with approving the motion to accept Sutton’s resignation 4-0 with Watkins abstaining.

Watkins did make one comment saying he felt he was appearing like “the bad guy” because he abstained from the resignation, but was reassured by other Board members. Ocobock told him he wasn’t the bad guy saying, “You’ve got to think about what it’s going to cost the school and the disruption in the high school where now we’ve got to find another teacher to replace him.”