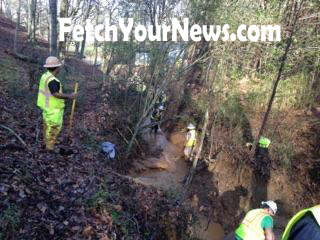 Southeast Connections (“SEC”), a contractor for Atlanta Gas Light, has been using 94 Moore Lane in Gilmer County as a slurry dumping ground for an undetermined amount of time. Gilmer tax records currently shows 94 Moore Lane being owned by James Moore. Sources tell FYN that James Moore deeded the property to his son Jonathan Moore and it has yet to show up on the tax record.  Jonathan is employed by Southeast Connections and drives the slurry pump truck. 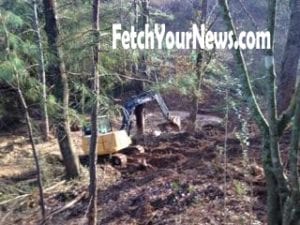 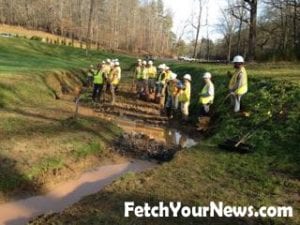 Holloway tells FYN that a preconstruction meeting was held at the Gilmer County Code Enforcement office approximately three weeks ago.  According to Holloway he made it clear to SEC during the meeting that the slurry from the Hwy 282 gas line project had to be dumped at an approved site.  SEC is now taking the slurry from the Hwy 282 gas line cleanup to an approved site in Cartersville, GA.

The slurry has been running into a tributary in Gilmer County for an undetermined amount of time.  (A tributary is a stream or river that flows into a larger stream or river main stream.)  This tributary runs into a trout stream, Running Town Creek.  The creek runs beside old Hwy 5 behind Bryan’s store.

Friday SEC started clean up efforts. It brought in several backhoe tractors, dump trucks and pump trucks-millions of dollars of equipment. They brought a crew of 50 employees to work the clean up effort.  Non stop truck loads of gravel, stone and hay were delivered to the site. SEC told Holloway that they would maintain these efforts through the weekend.

FYN visited the site Friday and witnessed the dump area before Mr. Moore told me I was on private property and asked me to leave.  We were able to see the beginning clean up efforts.  I visited the site again Saturday morning.  SEC had trucks using a pump to remove the slurry and muddy water. They are taking it to the only known approved site in the area, Yellowstone in Cartersville.  They built rock dams in several areas to slow the flow of slurry.  Holloway was on site documenting the clean up.  Holloway told us he was taking pictures of every phase of the clean up.  He said he would be doing a second site visit later Saturday and would return on Sunday to continue to follow the clean up effort. Rain is expected Monday and could slow the clean up.

Holloway told FYN that EPD would be in Gilmer County Monday morning to begin their investigation and will visit the site.  Later in the afternoon a meeting is scheduled at the Gilmer County Code Enforcement office.  We understand that Atlanta Gas Light, SEC, EPD and Gilmer Code Enforcement Officer James Holloway will be attending the meeting.  Sources tell FYN that the County attorney, David Clark, may be in attendance.

Georgia DNR Law Enforcement Division was also contacted.  Holloway told FYN that he took Sgt. John Vanlandingham to the dump site Friday evening.  Sgt. Vanlandingham meet with Jonathan Moore.  Vanlandingham told Holloway that he would be following up Monday. It’s unknown if DNR will be attending the meeting Monday.  Holloway said that he has been told that the District Attorney B. Alison Sosebee has been briefed of the situation.

FYN spoke to SEC Safety Director Keith Plemons.  We asked Plemons what product was used in the drilling process that created the yellow color in the slurry? He would not tell us and added that SEC would present the name of the product to EPA at the meeting Monday.  We asked if Moore was an SEC employee and drove the slurry pump truck for the company, he confirmed this but was not able to remember how long Moore has been with the company.  We asked if Moore was still employed with SEC to which he said “yes” but that was under deliberation at this time.  We asked, who is Moore’s SEC direct supervisor, he told us, “Paul Preston.”  We asked if the only slurry dumped was from the Hwy 282 gas line project, he said “as far as we know” but that was being looked into.  We asked if the product was a petroleum based product, he answered “no it was not.”

We have sent Plemons a question asking if SEC is currently working on the Dalton Gas Line Expansion project.  We have not received an answer.

Sources tell FYN that Moore has worked for SEC for approximately a year and has driven the slurry pump truck home the entire time and Source suspects that he has been dumping on the property for quite some time.  FYN was told that before Moore worked for SEC he worked for another company where he drove a pump truck that he brought home after work.

“The discovery of a sludge dumping site in Gilmer County is a great disappointment. That anyone could deliberately damage the beauty, the natural resources, and the environment of our county is beyond comprehension for me.  I want to assure our citizens that we will not rest until the area is returned to its natural state. Our chief environmental enforcement officer, James Holloway, has been on site full time since his discovery of the site last week, including working all weekend to monitor the cleanup. This will continue to be his absolute top priority. James has issued a Stop Work Order that will prevent any further construction until this situation is resolved. He will work with officials from EPD and, if necessary, EPA to ensure that all corrective actions are taken and to send the message very clearly that Gilmer County will not tolerate the destruction of our environment or quality of life. I want to commend Atlanta Gas Light Company and their contractor, SEC, for accepting responsibility and stepping up to do what is necessary to make this right. Although this will be a very expensive cleanup, there should be no cost to the taxpayers of Gilmer County.”

Hopefully many questions will be answered in the coming week. It is very expensive to dump at an approved site so did SEC not realize they were saving a large sum in dump fees?  Could just two weeks of slurry from the Hwy 282 project create the amount seen in the pictures or has slurry from other job sites outside the county been dumped on the property?  How many from SEC were aware Moore was not taking the slurry to the approved dump site?  If SEC was aware that they had to use an approved site is this not illegal dumping?  Was Moore gaining financially from dumping on his own property, and, if so, who all knew about it?  If the solution used to create the slurry is non toxic or not an environmental hazard then why require an approved dump site?  Why not just consider it fill dirt?  How many loads did Moore dump?

Although SEC seems to be working hard in this cleanup effort spending what would appear to be hundreds of thousands of dollars, if they hadn’t dumped the slurry in Gilmer County in the first place, they wouldn’t have had to spend this money.  Fifty men working the weekend 2 weeks before Christmas!   What will be the total cost of this clean up total?