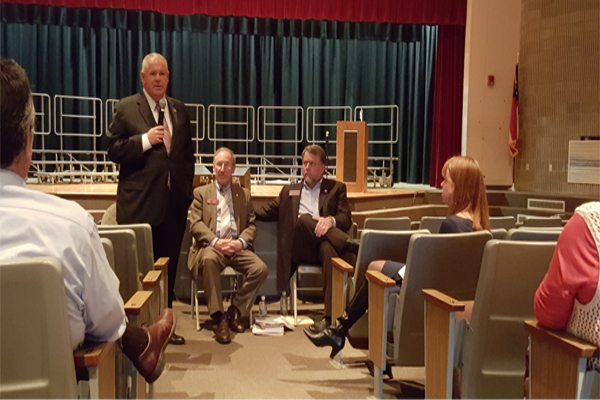 The trio of top state legislators responsible for ushering through Gov. Nathan Deal’s education reform proposals met with Gilmer County teachers and school administrators about merit-based pay reform and other components Governor Deal’s education initiatives. The question and answer meeting took place on December 9th at Ellijay Elementary School’s auditorium. Speaker of the House David Ralston, who represents the 7th district, which includes Gilmer County, arranged the Teacher Town Hall meeting at the request of Gilmer County educators. This was the first in a series of Teacher Town Hall meetings that the Governor’s Education Reform Commission and House Representatives are offering throughout the state to school districts which request one through their Representative. The meetings, not hearings, are to inform educators about upcoming initiatives and test educators’ reactions to the change in educators’ salary schedule as well as other pre-K – 12 and post-secondary education changes which Gov. Deal will attempt to enact in the 2016 Georgia Legislative Assembly. Gov. Deal’s suggestions will be based on a House Education Standards Commission report which will be publically released Tuesday, December 15th. Accompanying Speaker Ralston, at his invitation, were Chair of the House Education Committee, Rep. Brooks Coleman, and House Appropriations Chair, Rep. Terry England.

The meeting began with the trio’s general remarks about benefits of Gov. Deal’s proposed education reform. House Appropriations Chair, Rep. England, described proposed school district funding models. According to Rep. England, until now, the state mandated much of how school district budgets can spend their money. The new funding schemes will allow local educators, superintendents and school boards to decide how they will spend their state education money to best support student success and cultivation of the next generation of the local community. He emphasized that local boards and districts will have more money than they have ever had before and that they will have complete control over funds. Besides flexibility for how local districts will budget for items like technology or building, local districts will also have flexibility in developing merit-based pay metrics. The change in funding schemes will take place July 1, 2018.

Interestingly, Rep. England called students the ultimate and most important customer of public education. He noted that there are other top customer groups like teachers and educators, community and parents of students, but the emphasis was on teachers delivering the “product to students.”

Chair of the House Education Committee and Chair of the Governor’s Education Reform Commission, Rep. Coleman, moved to the topic of how Georgia’s concentration on building better schooling is building students better prepared for the 21st century jobs. He talked about how cooperation between local work force ready programs, technical colleges, and high school have already integrated a continuum of learning and life preparation from pre-K through university through the “Move On When Ready” program. He cited that current workforce ready directives have positively impacted several businesses’ choice to relocate to Georgia.

Other introductory remarks were responses to widespread educator complaints that no members of the reform commission were current classroom teachers. Rep. Coleman said, “People say you [public school educators] didn’t have input. We had all sorts of input.” He stated members of the Education Commission met with every district superintendent and board, as well as having district-wide teacher meetings which, in the end, totaled 2000 Georgia teachers. Also, Chairman Coleman speaks from his own 31 years of experience as a Georgia public school educator in Gwinnett County, serving both as a classroom teacher, elementary school principle and assistant superintendent.

When the subject of merit-based salary for teachers came up, the three legislators assured current educators that they can choose to stay with the traditional salary schedule, which is based upon degree level, additional continuing education and years of experience, or could move to a merit-based pay system, which would be a combination of the traditional salary schedule, student achievement shown through tests, and other factors. The exact components will be worked out in the 2016 General Assembly and, later, through local school boards and districts. However, once a teacher makes the decision about which pay system, he or she will not be able to switch to the other system. Teachers entering the Georgia’s public schools after the 2016-2017 school year must work under the merit-based pay system.

At stake, though not commented upon by the Speaker Ralston and Reps. Coleman and England, is a $400 million dollar Race to the Top federal grant which is dependent upon Georgia enacting a merit-based salary. Gilmer County is one of the 26 Georgia counties involved in the Race to the Top grant. Also, December 10th, President Obama signed the “Every Students Succeeds” bill which replaces “No Child Left Behind.” However, none of the three spoke about how Georgia’s education reform proposals mirror those which will be required “Every Student Succeeds”.

At the end of the opening remarks, Speaker Ralston reminded Gilmer educators that the Education Standards Commission report, and, subsequently, Gov. Deal’s reform initiatives are not law yet. Legislators will debate the specifics in the 2016 session. Also, he and Education Committee members will continue gathering responses about the initiatives from Georgia teachers and citizens. In Speaker Ralston’s words, “Just because something is in a report doesn’t mean it is a done deal. If you leave with anything today leave with that.”

The first few Gilmer County educators specifically directed their questions to how teacher merit will be determined. They gave examples of factors outside their control, like students’ home life, quality of academic coaching by parents, specific learning disabilities, test anxiety and English language barriers, that can affect student achievement and in turn affect a merit-based salary increase. None of the traveling trio said how these factors will be accounted for in merit increase decisions.

Even though the meeting was to settle teacher apprehension about merit-based pay and funding for schools, Gilmer teachers’ most passionate concerns voiced in the meeting were about standardized testing including frequency of testing and types of tasks. A twenty year veteran teacher of 3rd grade at Ellijay Elementary stated that the 3rd grade Milestones test is developmentally inappropriate for 3rd graders. Her examples were that the third-graders have difficulty switching between different task requirements of multiple choice and written answers. She gave an example of one of her brightest 3rd grader’s reaction while he was taking the Milestones test. During the middle of the test, he put down his pencil said he couldn’t do the test anymore. She explained his giving up was because he was anxious from frustration at the length of the test period and the continuous switching between types of tasks. She added that next year the difficulty will be much worse when the entire test will be on the computer and 3rd grade students must type the answers. “Third grade students can’t type,” she said.

To support her example, two Gilmer teachers unfolded one section of the 3rd grade Milestones test, the English language section, from one day of the two day test. The test paper is seven pages long. A disbelieving look went across Speaker Ralston’s face. He then said that the visual had so much impact on him that he will use it when presenting education reform initiatives to the Georgia legislature. Also, Chairman Coleman stated that frequency of testing is one of the topics addressed the Education Reform Commission report.

Superintendent of Gilmer County Schools, Dr. Wilkes, asked the legislators for clarification about how student progress and achievement test results will be used to improve grade level goals and teaching strategies.
One subject the Gilmer County educators did not ask about is school funding. The Education Reform Commission’s report will outline significant changes in how the state funds schools. Under the new initiatives, school district administrators and boards of education will have complete control of funds. This change potentially has great effects on teachers’ workloads and materials available for effective information delivery.

In a later phone interview with fetchyournews.com, Rep. Coleman clarified some of the topics brought up at the meeting. He said that merit-based pay is not a done deal; the Commission’s report only contemplates merit-based pay for teachers who begin teaching at Georgia schools after the 2016-2017 school year. Also, as of December 12th, the Commission has not voted on final recommendations. Once finalized, these then go on to Gov. Deal who will decide which recommendations to present to Georgia’s General Assembly. Rep. Coleman added, “I was very impressed by the passion and concern the teachers and staff showed for their colleagues in Georgia’s public schools.” He encourages educators to set up Teacher Town Hall meetings for their own districts and looks forward to hearing from educators.