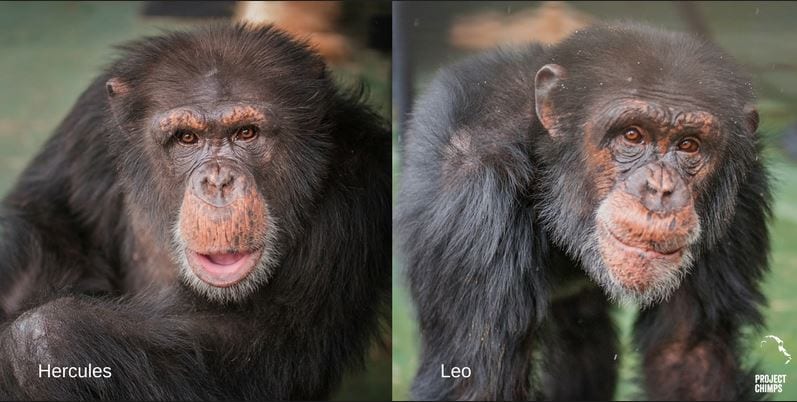 We had some very big news at the Project Chimps sanctuary in north Georgia today. Additional photos and video clips are available upon request.

Morganton, GA, March 21 – Two well-known former research chimpanzees now have a forever home in the Blue Ridge Mountains, thanks to a cooperative agreement between the New Iberia Research Center in Louisiana and Project Chimps, a 236-acre sanctuary in north Georgia.

Eleven-year-old Hercules and Leo joined other retired chimpanzees at the forested Project Chimps sanctuary where they will spend the remainder of their lives napping, foraging, and climbing pine trees.
The two non-human primates were used in noninvasive locomotion studies at a New York state facility, where they lived from 2010 to 2015. They gained news media attention when an animal rights organization filed a lawsuit seeking legal personhood for them. A New York judge dismissed that lawsuit in July 2015. They moved back to NIRC in December 2015 and were retired from research.
Hercules, Leo, and seven other male chimpanzees, made the 14-hour journey from NIRC to Project Chimps. They left Tuesday afternoon, arriving in Morganton, Georgia, as the sun rose Wednesday morning. Other chimpanzees in the group are Kivuli, Oscar and Jacob, age 7; Danner, 8; and Ray, Kenndie, and Binah, 9. Members of this social group of chimpanzees are the youngest males to relocate from NIRC to Project Chimps since the sanctuary opened in September 2016.