ELLIJAY, Ga – Gilmer’s Health Department and Courthouse are working closely together this week after a confirmed positive test was reported by the county Probate Judge, Scott Chastain.

FYN reached out to the Health Department and spoke with Gilmer Commissioner Chairman Charlie Paris about the Health Department’s involvement. Both entities noted that the Georgia Department of Public Health already has guidelines and directions in the case of positive exposure and the Courthouse is already taking measures in its own way.

Public Information Officer and Risk Communicator for the North Georgia Health District of the Georgia Department of Public Health, Jennifer King said, “COVID-19 is still transmitting in Gilmer County… and while we don’t refer to any specific cases or locations unless we have reason to believe the public is at a higher level of risk, we do share the latest Governor’s Executive Orders relating to COVID-19 protocols with the public, businesses, organizations, and agencies to follow, including information that helps prevent the spread of COVID-19 and how to respond if cases occur.”

King asserted that Gilmer’s local Health Department is working closely with the community in every way possible. Paris also noted that he had been in contact with the Health Department as the courthouse was responding to the exposure.

Continuing communication reaches far beyond just the courthouse, though, as King said, “Our local health department and environmental health office work very closely with community partners, including EMA, Family Connections, government agencies, businesses, churches and schools to remind residents of measures they can take to prevent the spread of the virus and protect against COVID-19.”

King said that public health is urging people to get tested for COVID-19. She went on to note that the department is also attempting to provide that opportunity to do so for free. She said, “We are attempting to prevent further spread of the transmission through contact tracing and repeatedly reminding residents of the critical need to always wear a mask in public, wash their hands frequently or use a hand sanitizer, avoid large crowds, social distance away from others by at least 6 feet, avoid physical contact with others by not shaking hands or giving hugs, and stay home and call their doctor if they feel they may have symptoms of COVID-19 or have been in close contact with someone who has tested positive over the past 14 days.” 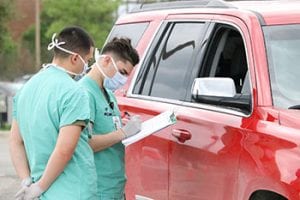 Public Health is urging people to get tested for COVID-19 through options like Drive-Thru Testing sites providing free testing for citizens.

Citizens who feel they have been in contact or may have been in the courthouse recently are also encouraged to visit the Testings Website. Gilmer has their own testing site times, on Mondays and Fridays, but there are other sites in our nearby counties in case some residents find it more convenient to register for an appointment at one of those.

King also stated, “Because the number of cases in our Hispanic/Latino population in Gilmer County is disproportionally high, local public health works with community leaders, partners, churches and schools to increase outreach to this community by sharing translated information, encouraging free COVID-19 testing, and providing education about the need to prevent the spread of the virus and how to protect against it.” 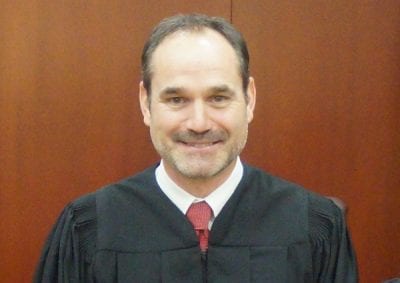 While sources have spoken recently about employees in the Gilmer County Courthouse having been exposed, Chastain himself has reached out to inform the public that he has tested positive. There are still indications of others in the courthouse having been exposed, but with an official confirmation, responses will be increased and sanitization orders are already in effect from yesterday’s Judicial Emergency Order.

Offices are shut down, however, FYN’s understanding is that the general courthouse is still open and the Sheriff’s Office is continuing to remain open in service to the public in the face of the positive test.

Speaking with Gilmer County Board of Commissioners Chairman Charlie Paris, the Gilmer Courthouse is continuing as ordered under the Judicial Order to close offices and courts. He stated that certain employees are still in offices in an isolated area answering phone calls and doing work that cannot be performed from home, but the offices are closed to physical access by the public.

Paris stated that he has notified employees within the Board of Commissioners office and has also notified department heads who are notifying their employees about exposures within the courthouse. Utilizing a rotation style operation in some departments, employees are still able to access their offices for filings or needs and operate phones and services while minimizing contact and risk in the building.

Other Elected Officials are operating and notifying employees in their areas as they see fit under their own jurisdictions.

While this operation is continuing for this week, Paris said that the entire courthouse building will shut down this Friday, July 10, 2020, in order for Restoration 1, a company out of Dawsonville certified for this type of cleaning, to operate, clean, and release a sanitizing mist within the building. Shutting down Friday will allow the mist to settle over the weekend before anyone returns to the courthouse.

Additionally, Monday, July 13, 2020, officials will reconvene after the cleaning and time has allowed additional testing to return on certain employees. Paris said that they will have to make a decision at that time about the continued operations or closures as needed with the information available then.

Paris did say that the Board of Commissioners are making every attempt to spread awareness of the possibility of exposure through news outlets, their websites, and phone calls. He stated that he has already received calls from citizens inquiring about the courthouse and a positive test. Paris suggested that citizens who may have visited the courthouse in recent days speak with their doctors about their situation and possible exposure and to follow testing as they order. He stated that as he is not a medical professional, he can only suggest this course of action for people.

Paris did say he has been in contact with the Health Department, informing them of the situation and the current steps being taken. Working in conjunction with them as well as local and state guidelines, he gave thanks and commended Judge Weaver on her quick response and action to the situation saying that he believes they have mitigated as much of the risk and exposure as they possibly could.

He went on to add that his hope is for people to take the situation and the virus seriously and be considerate of others and their capability to spread the virus even if they are not at risk from it.

Currently, sources say that Chastain’s contraction of the virus came from a Revival meeting at Oak Grove Baptist Church in Cartecay last week. FYN has reached out to the church for more information and is currently awaiting responses from church leaders. The church did cancel remaining services on July 4, 2020, as soon as first notice of someone running a fever and exhibiting symptoms was brought to them.

Our current understanding is church members are being contacted via the church line and suggestions to be tested have been issued in conjunction with guidelines from Health Departments. As with Revival Services of this type, it can be hard to keep up with numbers, but reports indicate that church officials are working diligently to contact and spread information so that any who may have attended services might be made aware.

FYN is attempting to contact Pastor Jamie Smith, but with large groups, it may not be possible to tell exactly who could have been the initial case or where it was contracted from before.

Additionally, FYN is now reaching out to officials in the and the Gilmer County Health Department about the positive test and their plans on sanitizing, quarantining, and contact tracing those who may have come into or worked in the courthouse. Jennifer King, North Georgia Health District Public Information Officer and Risk Communicator, said she is in contact with the Gilmer Branch and FYN is currently awaiting information from her as it becomes available.

Stay with us as more details become available on this story.