“A realignment is not necessarily mandatory for rebalancing trade”

WASHINGTON, D.C. – U.S. Senator David Perdue (R-GA), a member of the Senate Armed Services Committee, last week traveled to Japan, Taiwan, and Singapore to meet with international leaders about foreign policy and national security. Senator Perdue participated in an event at the Shangri-La Dialogues in Singapore where he spoke about America’s international relationships and his business experience in the Southeast Asia region. Earlier this year, Senator Perdue also visited China, South Korea, and the Korean Demilitarized Zone (DMZ) to meet with senior leadership. 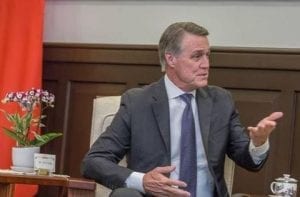 Major Player: “I used to live in Singapore and Hong Kong, and worked around this region throughout my career. I’ve watched it develop, and since 1965, the world has reduced global poverty by 60 percent, in part by protecting the region’s shipping lanes. The United States was a major player in that, and we want to continue to be a major player in that.”

Leveling The Playing Field: “Some of the things you see President Trump talking about now, like leveling the playing field, is a manifestation of the last 50 years of trade policies in the United States. We partnered with countries in the region, like Singapore to help them develop. That was in our best interest, and it was in the best interest of the area.”

Strong Military: “America has a strong military. We don’t apologize for that. Our military was one of the ways that we brought hundreds of millions of people in this region out of poverty. It allowed us to have free trade and safe shipping lanes which supported the global trade we are talking about.”

Protecting American Interests: “There are hundreds of millions who are joining the middle class in China, and we think that’s a good thing. When it comes to what this means for our trade and consumers in the United States, President Trump has drawn a line and said, ‘it’s time to take care of our people as well.’ That doesn’t mean that we will have a closed door.”

Hopeful For Peace: “We are hopeful peace can reign in the world. We have unanimous consensus across an entire reach of allies that support the self-determination of the human race. In America, we support self-determination around the world and have since our independence in 1789.”

China’s Growing Economy: “We are reminded though that in 1789, when our country started its first Congress, the largest economy in the world was China. With 1.3 billion people today, they are going to continue to grow. India is growing. It’s a very dynamic part of the world, and we are glad to be a part of that. We commit to these leaders to our continued support of the region.”

Rebalancing Trade: “Today, some of our allies are economically aligning in different ways around the world, yet they still look to us for security. I understand that, but at some point – and this is what President Trump is trying to say – a realignment is not necessarily mandatory for rebalancing trade. What he’s asking for is a level playing field with the rest of the world. That’s a trade issue, but it’s also applies to other issues as well.”