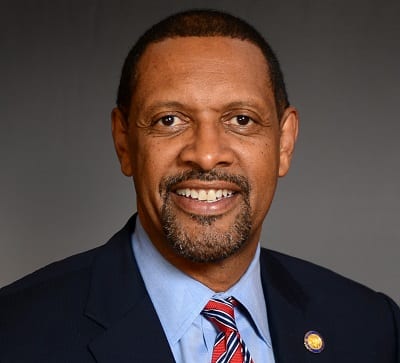 Spending a lot of recent time in Florida, Vernon Jones (R) spoke with FYN today on his efforts and plans with former president Donald Trump, Florida Governor Ron DeSantis, and

Meeting and studying with Ron DeSantis, Florida’s Governor, Jones said he is looking into businesses, vaccinations, and protection practices that Florida is doing so well.

Voicing concerns on other states and the federal implications of many modern issues including COVID, Jones again pointed to Florida as having the right idea. Jones supported DeSantis’ remarks that all are welcome and loved, but denied transgendered biological males from competing in female sports. He called out President Joe Biden for pushing to allow such things. Delving deeper into the transgender issue, Jones voiced his dismay that many are also pushing to inject children with hormones and perform surgery on children to modify their gender.

Jones said, “Now think about this, you have to be 18 to vote, 21 to buy any alcohol or anything. And they are performing this type of surgery on children and injecting them with hormones? Please, a child doesn’t know any better. You raise a child up and the child will make a decision at the appropriate time.”

Speaking on so many issues, BKP asked Jones if a recent group of tweets on social media bore any further effect on the Governor’s Race in Georgia. After many of those tweets started with “If I were governor…” the question became, “Are you running for governor?”

In response, Jones gave a few hints, but never directly said yes or no. Instead, he offered an analogy of baking a cake and the cake needing time and preparation to cook properly. He said, “I’m baking a cake. I’m not going to mess this cake up. I’m going to take it out when the time is appropriate.”

Continuing he claimed if he was governor, Trump would still be president because he would have campaigned for him in Georgia every single day.

With credentials ranging from optimizing organizations, agencies, and departments through corporate training to experience as a Chief Executive, he said he has been a Chief Executive longer than Brian Kemp. Serving twice as a County Executive in Dekalb County including nearly $4 billion in budget, one of the largest police departments in the state, one of the largest transportation budgets, public utilities, and the involved staff for that organization, Jones said he is among the most effective Chief Executives to ever come through Georgia. He never raised taxes, managed Bond referendums, and proved himself a fiscal conservative.

He did not elaborate on what office or exactly when, but what is important to Jones is Georgia. He said, “If you’re not taking me seriously about my efforts looking at running for Governor and putting Georgia first, then you’re out of your mind.”

Jones also spoke on other members of the party with a message of unity. When asked about opponents to face Raphael Warnock and the possibility of Doug Collins returning to an office, he said, “Doug Collins is as solid as Stone Mountain.”

He said that he knows Collins loves Georgia and wants to help Georgians. An “asset to Georgia,” he needs to be a part. Jones said he doesn’t believe Collins should be on the sidelines.

Jones invited Republicans to join the movement to reinvigorate and strengthen the party finding more information at wakingupamerica.us and signing up to be a part of the process and efforts to bring back jobs, economy, freedoms, and constitutional rights.