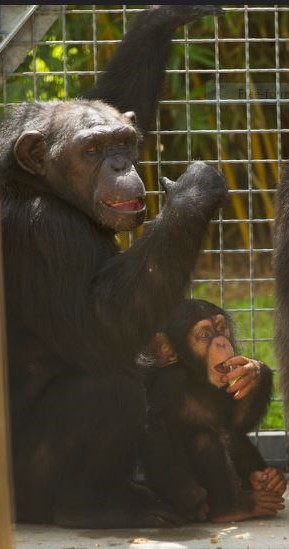 An exclusive gated-community, complete with high security features, is set to open off Lowery Road as soon as County Commissioners grant the retirees the opportunity to move to their Fannin County retirement homes at Project Chimps. (read “Commissioners Vote to Table Project Chimps’ Application to House 80 Chimpanzees in Fannin County”)

Right now the facility consists of three villas, one completely ready and two in different stages of construction.  Every two villas will share an open-air habitat enclosed by a 17 ft. high concrete wall.  Project Chimps is still developing the final structure of the open-air habitat in order to meet state permitting deadlines.

The first villa, Cedar Tree Villa, is ready for residents.  Cedar Tree Villa was donated by Billy Joe Armstrong and his wife Adrienne.  Mr. Armstrong is in the band Green Day.   The kitchen was designed and donated by Rachael Ray, complete with an over-sized kitchen window, so both chimpanzees and volunteers can satisfy their curiosity about each other.

FetchYourNews asked Sarah Baeckler Davies, President and CEO of Project Chimps, what kind of lifestyle the retirees will have in Fannin County.  She replied, “Sanctuaries have the luxury of just focusing on the chimpanzees’ needs.”  A big part of their life at Project Chimps will be having new choices and exploring those choices said Ms. Baeckler Davis, which sounds pretty similar to life of human retirees in Fannin County. 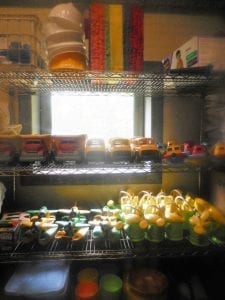 Toys donated by the local community for the sanctuary’s chimpanzees.

Local supporters of Project Chimps have already started donating entertainment supplies for the trip.  Ms. Baeckler Davis showed FetchYourNews the toys donated by the community.  She said that part of the fun of watching the chimpanzees is seeing how they use the toys.  Sometimes they do things that you expect humans to do, sometimes not; sometimes they take the bigger pieces and make        them into noise makers and shake them on the ground.

Overseeing the retirees’ social schedule is Mike Seres, Director of Chimpanzee Management.  FetchYourNews sat down with Mr. Seres to talk about how the chimpanzees will adjust to their new homes and to each other.

The chimpanzees will arrive in social groups of 8-10 over the next five years.  They are coming from New Iberia Research Center (NIRC), a division of the University of Louisiana – Layfayette. The chimpanzees within each group already know each other, but they don’t know those in other groups.  At the beginning, the group will just get used to their new space.  Mr. Seres said it is just like when you move into a new house.  You have some sleepless nights at the beginning getting used to the new creaks.  And, you have to learn the faces of the new people that you see every day.  Some people accommodate to the new noise quickly, some take longer.   They also have to learn to trust the climbing safety of their structure.

After getting the residents settled, Mr. Seres will work on helping the residents know each other. It can take a few weeks or up to many months to build the chimpanzees into a larger social group.

Mr. Seres described the initial getting-to-know-you conversation which pretty much covers the same sub-topics as human conversations: namely, are you someone I can trust, are you someone who can hang out with my friends, are you someone who gets aggressive easily and how strong are you.  Upon first meeting, two chimpanzees start panting their get-to-know-you questions.  Chimpanzees use a range of panting noises to communicate with each other.  If the chimpanzees are getting along, then they start touching each other and maybe doing a bit of grooming.  When it seems like the two will get along, Mr. Seres leaves the crawl through door between them unlocked.  If a chimpanzee chooses to learn more, the chimpanzee can enter the other’s cage.

Mr. Seres provided the following video of two male chimpanzees, Bingo and Antoine, having a getting acquainted conversation.  The cage set-up is very similar to the area in Project Chimps where Mr. Seres will socialize the chimpanzees.

Mr. Seres said the next step is figuring out who the leader is.  When he makes the one-on-one introductions, he observes the character of each chimpanzee.  He is looking for the same things people want in a human leader: outgoing, one who shows more intelligence, and one who can make more complex communication gestures so he or she can relay the message to others. Once he has found his chief chimpanzee, he begins building the group, introduction by introduction.  He says that it is kind of like when a semi-stranger walks into a party – the partiers turn around to see the newcomer.  They start conversing among themselves about who the newcomer could be.  Then, they decide to send someone to check out the newcomer.  The chosen chimp moves over and starts asking questions by panting, as in the video.  After getting some information, the chimpanzee returns to the party.  The partiers discuss among themselves if they need some more answers before the newcomer joins.  If so, they send a messenger out again until the partiers are ready to welcome the newcomer in.  Mr. Seres said when a particular chimpanzee has been absent from a group for a while returns, the group members bombard the missing chimpanzee with questions to find out about the trip to the outside world. 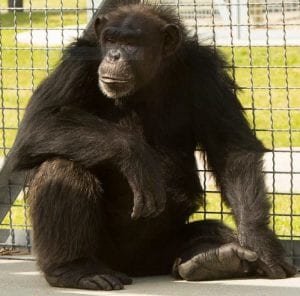 Project Chimps will live video-stream Mr. Seres’ work while he introduces the chimpanzees to each other and builds a group.  There are plans to build an observation deck for visitors overlooking the open-air area at a later date.

Mr. Seres is part of the “dream team” that Project Chimps President and CEO, Sarah Baeckler Davis created.  Before taking on Project Chimps, Ms. Baeckler Davis led the North American Primate Sanctuary Alliance.  In this position, she met people in the primate sanctuary community all over the world.  The sanctuaries knew that the 600 chimpanzees in United States’ research facilities would be retired within the next few years because of new laws prohibiting biomedical research on chimpanzees. Many of the chimpanzees would go to federally-funded sanctuaries, like Chimp Haven in Louisiana.  However, chimpanzees that were privately held, like those at NIRC, did not have a sanctuary to retire to.  That is when she began developing Project Chimps. Ms. Baeckler Davis said her previous position let her take a world-wide look at who is working in the sanctuary community and she was able to hand-pick who came on the project.  “I am really proud to lead them,” said Ms. Baeckler Davis.

Because the investigation, the United States Humane Society has a special relationship with Project Chimps. In fact, it provided the launching pad of funding to get the project going, said Ms. Baeckler Davis and will continue to play a role in Project Chimps’ funding. 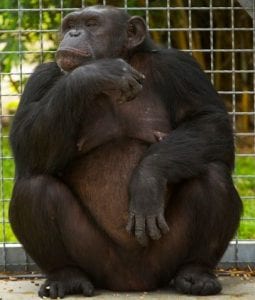 FetchYourNews asked Ms. Baeckler Davis about the chimpanzees work at NIRC.  She said that she first visited the center a few years after the Humane Society’s investigation. When she went to meet the chimpanzees she said they were all in social groups and she didn’t see any evidence of brutality.  Ms. Baeckler Davis continued, “I am a very forward-looking person about this project.” She said that sanctuaries are the only type of facility where the sole purpose is just caring for the chimpanzees needs because it doesn’t have to answer to other stakeholders such as companies or visitors coming through the gate.

There are four sub-species of chimpanzees throughout the world.  Chimpanzees can weigh between 90 to almost 200 lbs. Full-grown, they can be around four feet tall. They have about twice the strength of humans. Project Chimps’ chimpanzees range in age from one to 50; the lifespan of a chimpanzee in captivity is 40 to 60 years.  The youngest retiree is Ryker. Ryker and her Jade, the mother, are pictured at the top of the article.

The retirees will be keeping a low profile in the Fannin community, especially while getting used to their new home.  Project Chimps  will start an education program for area students and occasionally offer educational tours at the facility.  The chimpanzees won’t be available for one-on-one conversations with their fellow Fannin retirees.  Ms. Baeckler Davis said  a sanctuary’s role is to minimize contact between humans and chimpanzees. Even staff aren’t allowed to touch the chimps except for medical procedures like physicals.

Among the retirees are two nationally-known chimpanzees, Hercules and Leo.  The chimpanzees came to national attention in late 2013 when the Nonhuman Rights Project (NhRP) sued the State University of New York Stony Brook over the captivity of Hercules and Leo and their use in research.  The NhRP describes the research as “Stony Brook subjected them to frequent administrations of general anesthesia and thrust fine-wire electrodes into their muscles to conduct locomotion research… Leo’s heart once stopped while he was under anesthesia… Hercules still has not regained normal use of one of his legs.” 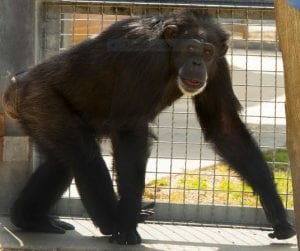 The Nonhuman Rights Project argued that chimpanzees are too cognitively and emotionally complex to be held in captivity and the court should send the chimpanzees to Save the Chimps sanctuary in Florida. The NhRP attempted to have Leo and Hercules covered under a writ of habeas corpus, which is used to legally to bring a prisoner into court so that the court can decide if the person’s imprisonment is legal.  In July 2015, New York Supreme Court Justice Barbara Jaffe said that the two chimpanzees do not meet the legal definition of “person”.  However, her ruling also left open the changing definition of human. She stated that a “thing” doesn’t need to be “human” to be given personhood.  An example of this is the Citizens United case which allows corporations to be seen as individual humans in regards to campaign contributions. Judge Jaffe also spoke to the changing idea of what is considered human.  She stated that, “Not very long ago, only Caucasian male, property-owning citizens were entitled to the full panoply of legal rights under the United States Constitution.”

Currently Hercules and Leo are at the New Iberia Research Center in Louisiana, as are all the other chimpanzees who will come to Fannin County.  Ms. Baeckler Davis does not know when Hercules and Leo or Ryker and Jade will arrive at Project Chimps. It is up to NIRC.

This is the second in a series of articles FetchYourNews is writing about Project Chimps. Following articles will examine Commissioners worries about safety, health and funding in comparison to national data and Project Chimps’ facility.