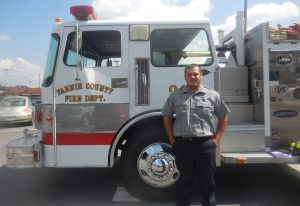 Fannin Volunteer Bradley Beaver was in elementary school on September 11, 2001.  That morning, the teachers brought the students together and they watched as the United States and the world changed forever. Now, as a First Responder himself, Sept. 11 is more personal.  Beaver said, “Sept. 11th makes you completely aware about things that could actually happen.  Just because it (Blue Ridge) is a small town, it doesn’t mean it can’t happen here.  Coming together today as a community in the name of the Lord shows greatness for our future.” 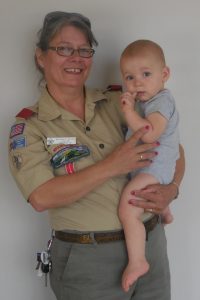 Barbara Stone of Boy Scout Troop 460 in Morganton was holding her youngest child, age three, on her hip as she watched coverage of the terrorist attack on television.  Today, she accompanied Scouts to the Awake America ceremony.  Almost all of the Scouts there were born after Sept. 11, 2001.  “It’s important for the boys to remember so they know what happened, why it is important to protect the community, and to see the community come together before God,” said Stone.

Troop 460 has long participated in community events honoring those who lost their lives in service of their county.  The troop helps Fannin veterans with Memorial Day and Veterans Day ceremonies. 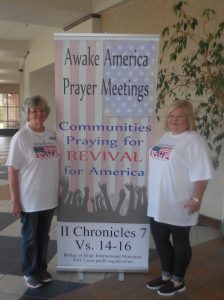 Martha Smith volunteered for Awake America because she believes in the power of prayer.  America will do great through prayer and under God’s direction said Smith.  Smith said that the prayers some of the prayers offered up during the ceremony would be for freedom of our religion and the liberty we have in Christ.  We will also intercede for our country as we pray for national, state and local politicians.

Beaver, Jones and Smith represent the three themes of the 8th Annual 9/11 Awake America Prayer and Memorial Service – thanking First Responders and US Armed Service Personnel for continually laying their lives on the line for Americans here and America abroad, training youth to become righteous leaders of their communities and  petitioning God through prayer to heal our land. 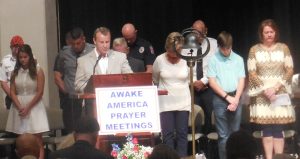 Fannin County Sheriff Dane Kirby gave the invocation.  In it he asked God to hold a protecting hand over public safety officers and their families.  He thanked the youth there for being forward thinkers and reminded the audience that each young person in the nation is our future. 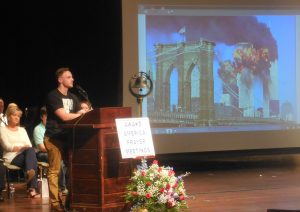 Zachary Stotler gave the Keynote Address.  He decried the dangers of drugs, drinking and evolution that is present in public schools and universities.  In front of images of New York city on Sept. 11, 2001, he also spoke about the evils of foreign religions coming into our lands and disrupting traditional American religions. However, he did not specify what the foreign religions are. 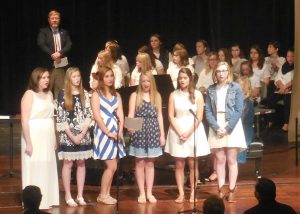 Numerous youth choirs and ensembles performed hymns and anthems like Amazing Grace, How Great Thou Art, Battle Hymn of the Republic and the Star-Spangled Banner that embody American Protestants’  belief in God and country.  Youth as young as elementary-school age led prayers in front of the 300 plus participants.

The themes of public service, prayer and youth were present in the Salute to the Fallen portion of the program.  Representatives of current Fannin and Gilmer First Responders, Military Veterans, priests and youth stood center stage as a bell rang three times, signifying the final homecoming of the New York firefighters killed on 911.  Taps played its mournful sound. 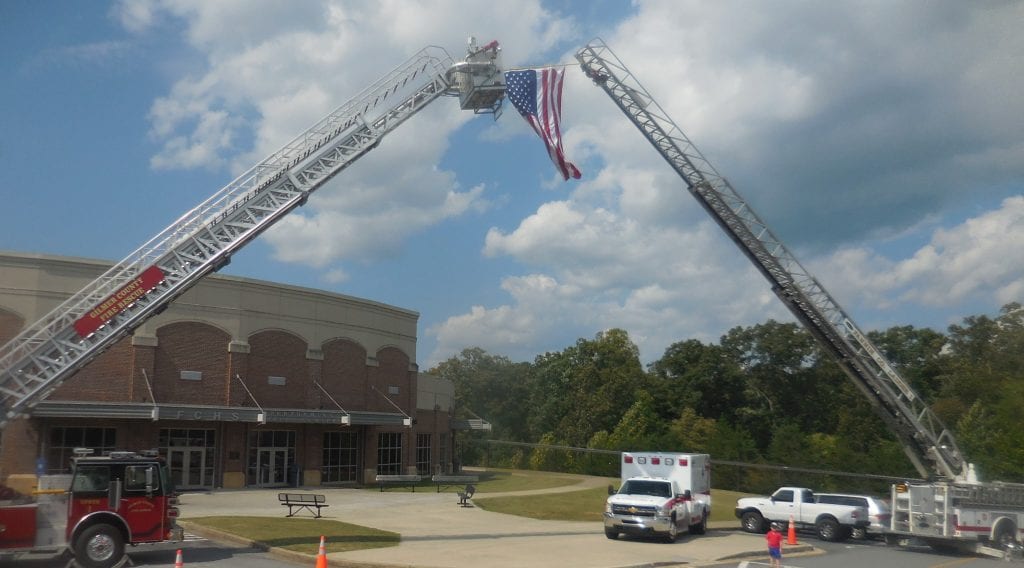 Fannin and Gilmer ladder trucks hoist the US flag. They represent the unity of communities coming together to safeguard ALL Americans. Gilmer’s ladder truck (left) is named Tower 1, very fitting for a 9/11 Memorial service.

This article has been updated.