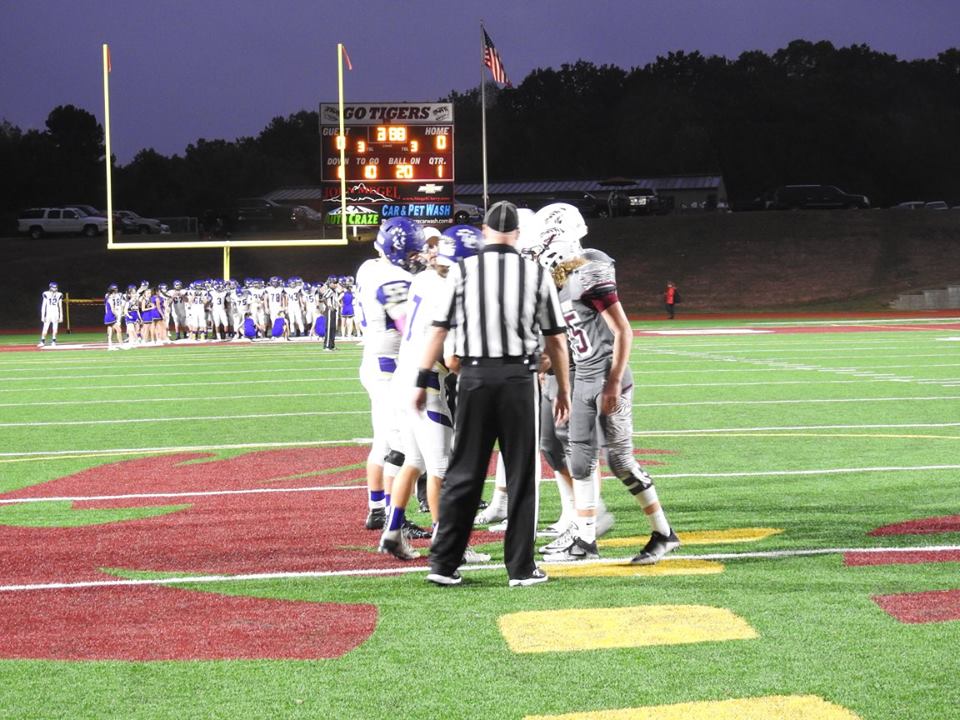 DAWSONVILLE, Ga. — Friday night’s Region 7-AAA game between Dawson County and Union County was expected to be a high-scoring shootout between two gun slinging quarterbacks. It was all of that but Dawson County’s guns had a lot more bullets. The Tigers scored just about every way a team can score in rolling to a 57-26 win at Tiger Stadium.

Dawson County’s junior quarterback Coey Watson ran for three touchdowns and passed for another. Linebacker Luke Martin turned in a 45-yard pick six, Kolton Brumbelow returned a kickoff 95 yards for another score and placekicker  was accurate on all seven extra point attempts.

The win keeps the Tigers unbeaten in region play and on a collision course with preseason favorite Greater Atlanta Christian in the season finale.

A steady mist fell on Tiger Stadium throughout the game but even on a very wet field, Dawson County wasted little time finding the end zone. On their second possession, Watson drove the Tigers (4-1, 2-0) 80 yards. A 29-yard highlight-reel touchdown catch by Austin Young over a Panthers defender provided the first score.

The Tigers defense set up the next score when Wyatt Hayes picked off a Cole Wright pass at the Panthers 45 and raced all the way to the 12 before being run out of bounds. Five plays later, Watson bulled his way in form the 1-yard line to make it 14-0.

Wright, an exciting quarterback who has averaged 277 yards per game in total offense, quickly rallied the Panthers, scoring on a 38-yard run to start the second quarter.Senior Jeremy Whalen killed the next Union County drive with an interception. Six plays later, Taylor Cronan found the end zone on a 6-yard run.

The Tigers stretched the lead to 29-7 at halftime on Watson’s 39-yard touchdown run.

Once again, the Panthers (5-2, 1-2) tried to claw their way back into the game, starting the second half with a 77-yard scoring drive  capped by Wright’s 2-yard scoring run. The drive was aided by back-to-back-to-back penalties against Dawson County totaling 35 yards.

Dawson answered that score with a 44-yard run by Watson. The Panthers still had plenty of fight left in them and drove 75 yards to cut the margin to 36-20 as Wright dove in from the 3.

But Brumbelow returned the ensuing kickoff 95 yards for a touchdown. It was his second kickoff return for a score in two weeks. The speedy senior took the second-half kickoff back 99 yards against North Hall last week.

It was a dominating win against a good Union County team and one of the most complete games for Coach Sid Maxwell’s team this season.

After the game, he told his team, “Great game, but you’ve got to get better.”