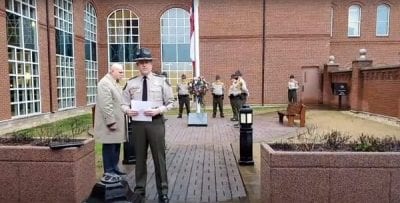 A long weekend for some as they take a day to remember Presidents and celebrate Valentine’s Day, yet, it also marked a major event for the Gilmer County Sheriff’s Office and Gilmer Sheriff Stacy Nicholson. The office honored the memory of their fallen Deputy Brett Dickey in the 25th anniversary ceremony.

An annual event, many will recognize certain memorial actions like lowering the courthouses flag to half mast or the playing of taps as Officers salute the memorial. Sheriff Nicholson spoke for the memorial, thanking those who were present for the ceremony.

Nicholson said, “Today is a milestone mark in the memory of Brett. It’s the 25th anniversary, today, of when he was killed in the line of duty as a Gilmer County Deputy Sheriff. February 13, 1996, I will never, ever forget that day… There is so many here today, so many that worked for the Sheriff’s Office, so many citizens in the county that are so supportive of the Sheriff’s Office.”

Nicholson said, “I hope that what we try to do, in some small way gives some comfort or peace to the family. I feel like it is our responsibility to honor Brett’s memory every year.”

The memorial transpired in the rain as Nicholson jokingly said it was “perfect weather.” Yet, some would agree it is altogether right and proper that a day of remembrance be somber and cloudy.

It is difficult to label the remembering of a tragic day and the loss of someone in a community. More so for those in the department who knew him or were close to him. As citizens we can only know a part of the sacrifice and the life. Some call days of remembrance a celebration to celebrate the life and the efforts of this man. Some call it a memorial, calling to mind memories of life together or service alongside him. Still others might call it a ceremony, ritualizing the events to create honor from tragedy. One may call it a vigil as they wish to guard the story and carry it onward into the future, so that others may know of the sacrifice.

Additionally, many people will drift from year to year, the day may be a sad dirge one year becoming a day of celebration and memory the next.

Nicholson said that his wish to continue past the 25th anniversary is to continue the memory. He spoke about the younger generation and many citizens that didn’t know Dickey, offering his thoughts and hopes that the people of Gilmer County would share the memory. He said, “Tell your kids who Brett Dickey was. He made the ultimate sacrifice for citizens of this county and the state of Georgia.”

Nicholson recalled a couple stories of his time with Brett Dickey including one from the night that he died. He also recalled how small the Gilmer Sheriff’s Office was at the time, a small “family” he called them. A family devastated by the events that transpired. Nicholson thanked retired Gordon County Sheriff Sid Roberts and retired Murray County Sheriff Howard Ensley who were present at the 25th anniversary ceremony. Nicholson thanked them because he said they “ran Gilmer County Sheriff’s Office” for a few days after the events of Dickey’s death.

With tears welling up, Nicholson said to both the retired Sheriffs,  “That made an impression on me.”

Gilmer Sheriff’s Office Chaplain Scotty Davis also spoke before praying over those present. He said, “We are here honoring a man who is a hero because he served this county and he served this community. Preserving, serving, and protecting you and your parents as they grew up. It is a great honor serving in law enforcement.”

Davis’ prayer ended the ceremony as the deputies present marched away immediately after.

In the Bible, in the book of John, Jesus speaks to those who follow his faith saying, “Greater love has no one than this: to lay down one’s life for one’s friends.” A man who serves, who offers his life daily in that service, may have died in that service, but he offers that love to those he served and to those he offered his life daily to protect. It is sad that one day, that offer was claimed. Yet, it is a portrayal of love on this Valentine’s Day weekend that one man gave to a community, that he gave to those he served.