Celtic Management proposed a new road next to Ross Lloyd Road so residents could make a left turn out of the property.

GDOT won’t allow a left turn to be made onto Main Street/ Hwy 76. The proposed change would result in the property development area becoming four acres with another acre for Celtic Management to sell. 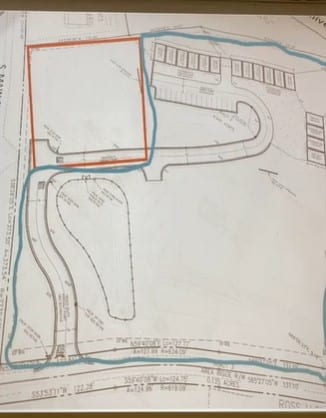 The red box indicates an acre to sell and the four remaining acres are outlined in blue.

According to the developer, two units are already presold, and the townhomes won’t be rented.

“More importantly, it gives us control of what our density is all over the city,” Mayor Liz Ordiales stated.

The mayor added that 10 acres per acre were probably too many, but six units appeared to be a good compromise. She admitted the city does need workforce housing.

The townhomes are expected to be around $280,000 and up. The plan is to build the units in sections to see how the structures sell before proceeding.

Councilmember Anne Mitchell, who has expressed concerns about the project, felt this was a good compromise. Some members of the audience agreed with the change while others did not.

“The traffic is still going to be heavy, but traffic is heavy all over Hiawassee. If you want to make a left turn on 76, you’re going to wait no matter where you are. It’s not just there,” Mitchell said.

Councilmember Nancy Noblet stressed that if the townhomes aren’t built, then it’s possible a car wash or storage facility took the space instead.

Hwy 76 is controlled by GDOT, and any traffic issues must be presented to the department as well as approved before Hiawassee can make any changes to the road.

The second reading or the ordinance update will take place on Tuesday, July 6 at the City Council meeting. The council can also vote on the ordinance that night.