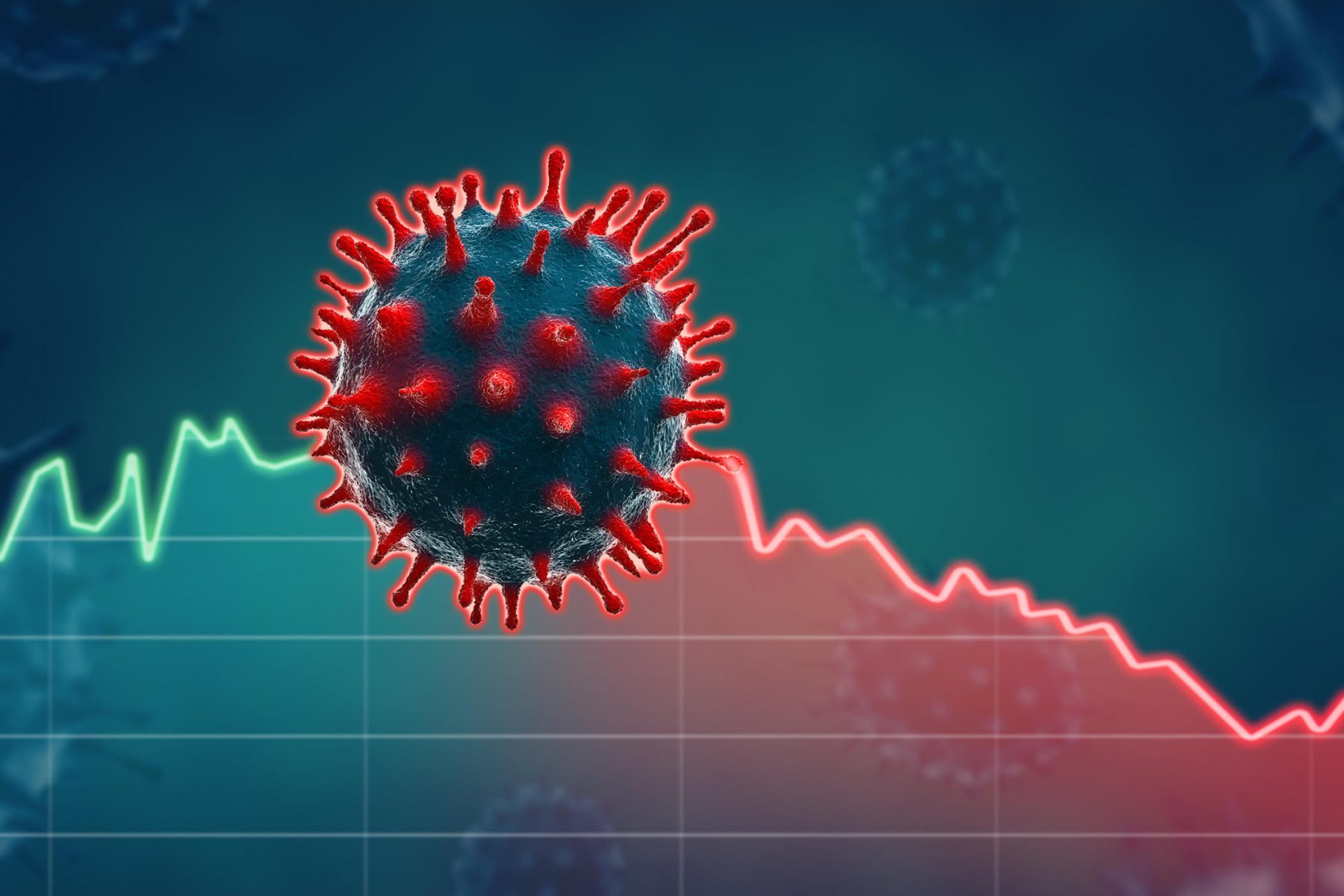 GILMER COUNTY, Ga. – Gilmer, like most all of North Georgia, is seeing resurgence in the COVID-19 virus, whether from the original virus or some variant.

According to reports from the Georgia Department of Public Health, Gilmer saw 15 new cases yesterday alone. In the last two weeks, it has seen 61 new cases. Along with this, the Georgia DPH has once again put Gilmer on the High Transmission counties list. 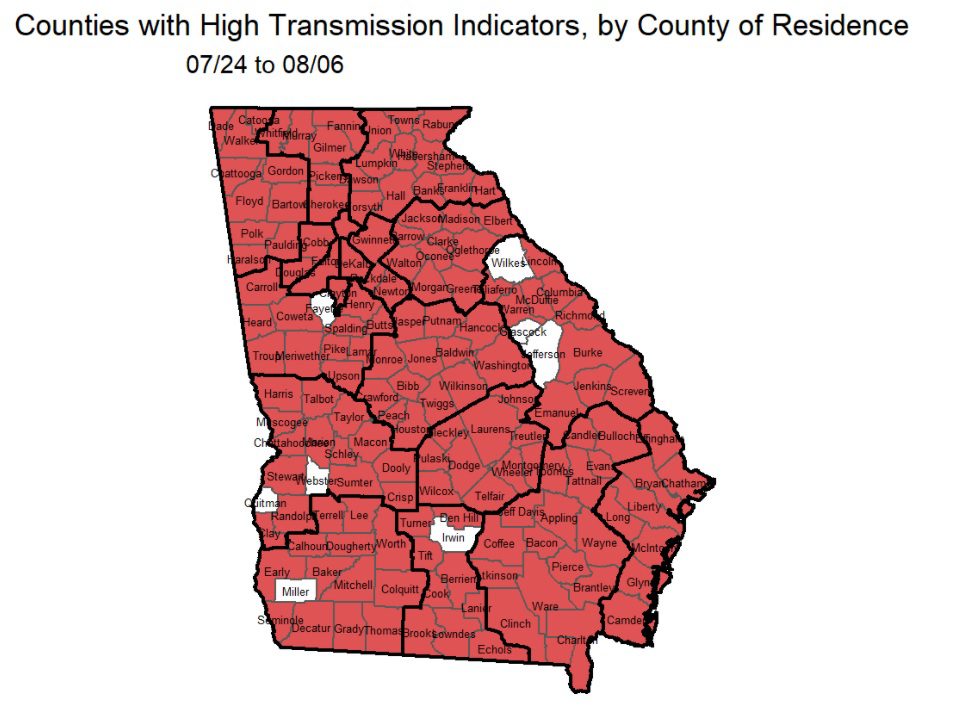 According to documentation on the GDPH website, they classify High Transmission with the following criteria; “14-day cases rate is >100 cases/100,000 county residents (>5 cases during this period) AND 14-day average % positive PCR tests >10% (>20 total tests performed during this period).”

The Georgia DPH also reports that Gilmer has had 2,663 total cases as of August 9, 2021. Gilmer is among the vast majority of counties in Georgia with this classification, now, as only eight counties in the entire state still remain outside of that criteria. Last week, there were nearly 30 counties not classified as High Transmission.

Further breaking down their statistics, the Department reclassified the counties into three classifications of Green, Yellow, and Red based on their positivity rates in testing. Gilmer received a Yellow Classification. Yellow means “5-10% PCR positivity during previous 14 days.”

Along with the increasing numbers within the county, discussion is increasing at state and federal levels about pushing further with mandates than what has been previously seen.

On August 3, 2021, the North Georgia Health District published an article that stated, “In areas with substantial and high transmission, the CDC recommends that everyone (including fully vaccinated individuals) wear a mask in public indoor settings to help prevent spread of COVID-19 and the Delta variant.”

FYN has confirmed with some local public safety authorities in nearby counties that local discussions have already started for reinstating suggested preventative measures and restrictions in some areas.

Gilmer Schools have also been monitoring the numbers consistently as Superintendent Dr. Brian Ridley said they look at several reports from the daily numbers to specifically school age children from the Department of Health. Dr. Ridley noted that the schools are, again, working closely with the Department of Public Health as these numbers trend upward. From webinars to communicating with the local branch of the Georgia Department of Health, the system is continuing to stay connected with both medical experts and surrounding counties and their BOEs according the Ridley.

He also noted that some steps are already being taken as suggested mask usage and separation in the cafeteria are just some of the small steps they have taken so far. While he said that the virtual academy is available as a back-up, they have no immediate plans for usage as a response to the numbers. He also stated that mask usage is suggested to students. The school mandate was lifted towards the final few weeks on the last school year.

Board of Commissioners Chairman Charlie Paris has also commented saying he monitors the county’s numbers. With the county’s regular meetings starting tomorrow morning at 9 a.m. and Thursday at 6 p.m., there is no planned discussion nor any immediate response in how the meeting will be held.

The Department of Health has put the majority of counties into the High Transmission category while local boards are opting for caution and analyzation to see if this is simply a small spike, or a trend towards something more.

BLUE RIDGE, Ga: The status of COVID-19 in Fannin appears to be trending in the right direction as positive cases begin to drop and vaccine providers become more readily available.

According to EMA Director Robert Graham, 11 percent of tests are coming back positive, but the health department is no longer giving COVID-19 tests. As a result, the capacity for administering tests might have decreased. The state still considers Fannin to be a high transmission county.

Vaccine availability depends on national supply. North Georgia Health Department spokesperson stated “We urge residents who are eligible for the vaccine but have not yet registered for an appointment to monitor our website and social media pages on Facebook, Twitter, and Instagram for updates as additional appointment times become available. All existing appointments are still valid. ”

“Definitely want to thank the Kiwanis Club for working with us. I think it’s a testament to our community that we were able to reach out to someone like that, and they were more than gracious to help us out. We needed a large facility like that,” Chairman Jamie Hensley stated.

On Tuesday, February 9, Fannin had a total of 18,062 cases, with 133 confirmed over the last 14 days. The COVID-19 variant hasn’t reached the county yet. Health officials claimed the current vaccine protects against the variant as well.

At the Fannin Regional Hospital, 15 percent of total visits are COVID-19 related. ICU capacity is between 80 to 100 percent with extended stays in the unit. The hospital’s experiencing 70 percent capacity on the medical-surgical wing, but bed availability increased over the last 24 hours. On any given day, the pending positive cases for COVID-19 range from 30 percent to 80 percent.

The state granted Fannin Fire and EMS vaccine provider status, and they’ve administered 522 doses with 600 doses order. However, half of the ordered amount will serve as second vaccinations.

“Whether we get it or not, I don’t know or how long it will be before we get it, but hopefully, we’ll get some of it coming in next week,” Graham said.

Fannin EMS’s list of individuals requesting the vaccine exceeds 270 as of Tuesday. More people call in each day.

Currently, only Phase1A+ Georgians can receive the vaccine, so people who are 65 and older, a caregiver of a senior citizen, healthcare workers, law enforcement, public safety, and first responders.

Once the state opens vaccine distribution to educators, Fannin EMS and schools have created a plan to vaccinate the district’s employees at the schools. To lighten the health department’s load, they’ve offered to vaccinate utility companies like Tri-State Electric.

Georgia’s setting up some mass vaccination sites around the state, but not close to Fannin for the moment, Graham added.

No one in the fire department, EMS, or 911 is currently COVID-19 positive. Graham believes it showcases the care his employees are taking with their health and others.