ELLIJAY, Ga. – Honoring the entire Ralston family for contributions to the county and the park specifically, including that of Georgia House Speaker David Ralston, the Gilmer County Board of Commissioners voted unanimously to rename the riverside park along Old Highway 5 to “Ralston River Park.” 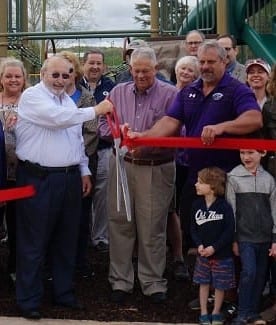 In April of 2018, Speaker David Ralston attended the opening of the new playground at River Park which a state grant aided local funds in creating.

Originating in this month’s meeting as an agenda item to rename the walking path for the Ralston family, discussion turned to the 28 years of service the county has received through numerous efforts from the family as a whole. Parks and Recreations Director Kevan White spoke during the Commissioners Work Session on the topic saying that some of those efforts include employment with the Parks and Rec Department, officiating basketball games over the years, memberships to the Parks and Rec Advisory Board, coaching various sports, GRPA awards and recognitions, state level service with  public service since 1992, state legislation since 2002, volunteer services in disasters like Hurricane Isaac, state-level support in the recent upgrades, county level public service in the commissioners office, and more.

The original proposal the White spoke of was to name the path the “Ralston Riverwalk.” However, Post Commissioner Hubert Parker offered a step-up alternative in naming the whole park instead of the just the walking path. While White said he had thought about it, but didn’t propose it at first, he noted that several parts of the park, like the tennis courts, bear names of people who have dedicated great services to the county and the Parks and Recreation Department as well. White also noted that he has further plans for other dedications in the Clear Creek area as well. 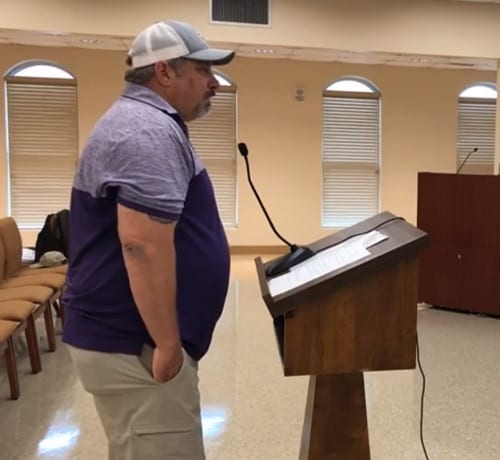 Kevan White speaks to the Gilmer BOC in May of 2021 about renaming the park as “Ralston River Park.”

Ultimately, no objection came, and a unanimous agreement to increase the dedication from the walking path to the park in general was made. The BOC May Regular meeting saw the formal motion to add the honorific.

The official name change completed, Chairman Charlie Paris did tell FYN that the county would be placing some sort of plaque or signage bearing the name in the future. But does not currently have a sign ready for it.