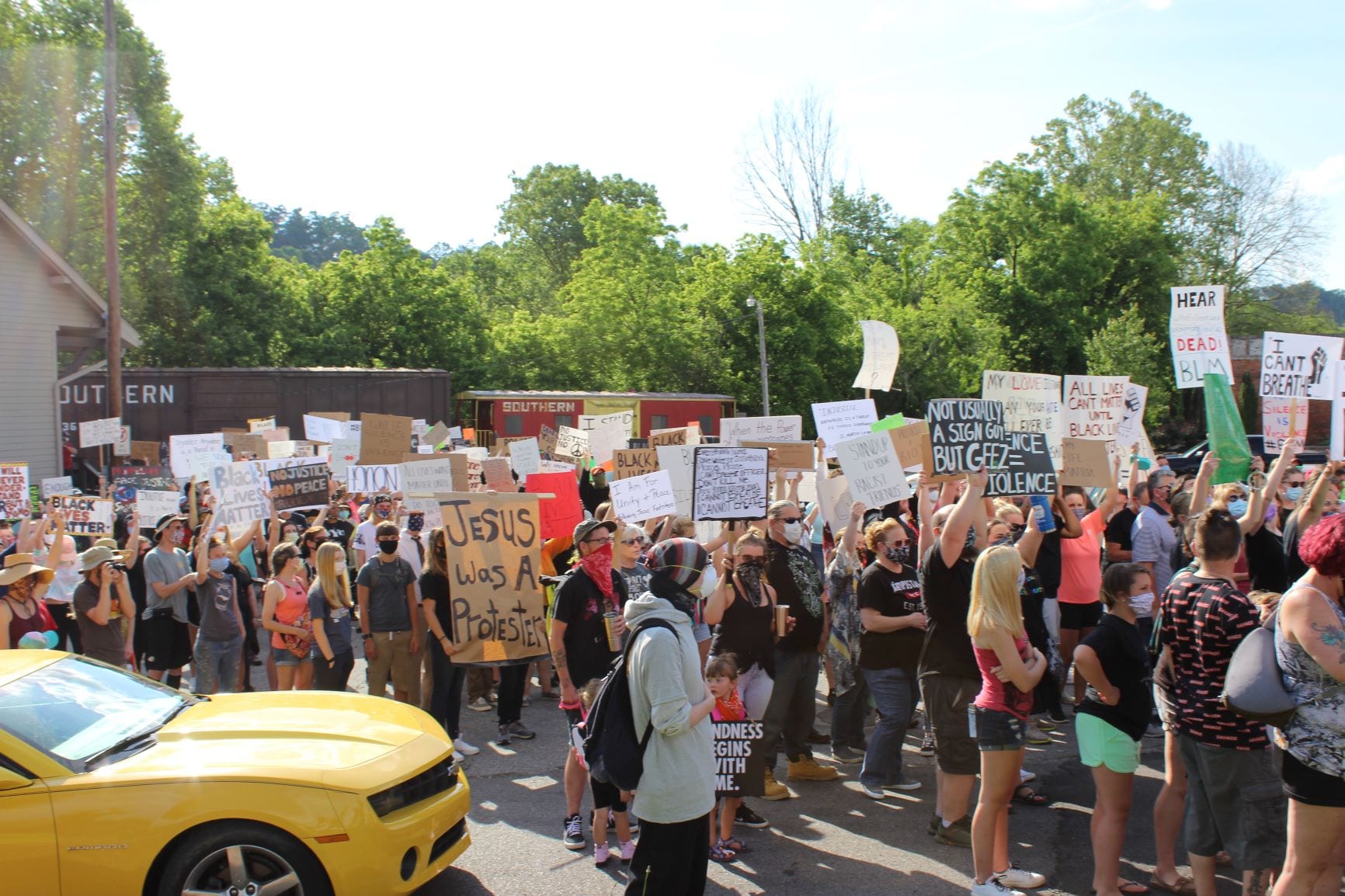 Approximately 450 or more BLM supporters brandished homemade signs while marching from the train depot to the courthouse. The three young adult organizers created the event on Monday, June 1 with the intention of holding a small gathering with their friends. However, after launching the Murphy BLM Peaceful Protest group, it grew from 10 to 200 people overnight. At the time of the event, the group had 677 members. No one expected such a big crowd, and several protesters expressed the hope they felt at the sight.

“I think it says there are a lot more people out there then you know. Like that support what you’re trying to convey and spread the word. I think it just says a lot about what we don’t know is out there,”  organizer Jake Reed told FYN on the protest’s success.

Reed and his fellow organizers TeLor Allen and Emily Mills all stressed their desire for a peaceful protest leading up to the event. They wanted it to be a safe space for the people from Cherokee County to show solidarity with the BLM movement.

“I am not a rioter. I am not a looter. I am not a thug. I am not a stereotype. I am a student. I go to the University of Tennessee. I am a daughter. I matter. My name is TeLor Allen,” declared Allen. “Thank you for using your voices for a cause that is so much beyond us that we can’t even imagine.”

The event appeared to serve as an outlet for those who wanted to support BLM and share their grief as well as desire for change. 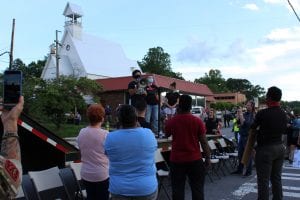 TeLor Allen addresses the crowd of the event she helped to organize.

“[I experienced] a lot of recently feeling helpless, but then hearing oh there’s a protest actually going on here in Murphy, which I was shocked to find out considering how small it is. But I’m so glad that it happened and glad that I am here,” said one protester who goes by Ryvers.

FYN spoke with participants about small towns and the likelihood of protests in support of BLM. Certain individuals discussed that residents in rural communities are “at peace” with how things operate and don’t see a need for change. No one wants to “rock the boat” or take a gamble on controversial topics.

Diversity also plays a part in how communities see BLM protests. One protester talked about moving from Athens, Ga to Murphy, NC, and how one of their classmates told them that they never saw a person of color before.

Another BLM supporter brought up community diversity and the role it plays:

“We grew up in Florida where there was diversity and there was color and to move to a small town and to see how closed it was. This was very important to us for our voices to be heard. Not only for Black Lives Matters, but also for the injustice that the police, there are so many occasions of them getting away with so much stuff,” said Kathryne, “The fact that the police officers were on the side that really meant a lot to everybody.”

“We all wanted it to be peaceful and glad that it’s reaching such small communities too,” responded Lynsey. “This is a matter that affects all of us.” 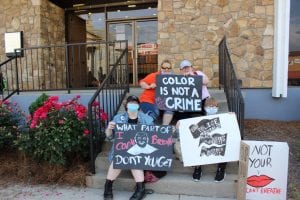 Many protesters made signs to illustrate their opinions and feelings regarding injustices against African Americans.

When asked why now and why they felt the need to demonstrate, they responded:

“I’m sick and tired of seeing everything happen on the news. I’m tired of watching our black Americans go through everything that they are. I want things to be better for them. They should feel safe and have the same privileges that we do and not feel oppressed or as though, they can’t attain, the same things that we do,” expressed Sierra Butler.

“I’m tired of just standing by and knowing that I have white privilege, but not being able to do anything about it,” added Brenda Hammond. “I know that there are people who have it so much worse than we do simply because they’re darker than us and that’s not right. It makes me hurt so much to see so many people in pain.”

Hammond also addressed how her family has a lot of mixed opinions on the issue, but they are having conversations about race in America to try and understand.

While marching, they continued to chant “No Justice No Peace,” “George Floyd,” “Black Lives Matter,” “This is America,” and “I can’t breathe.” Once reaching their destination, several protesters laid down in the street with their hands behind their back and chanted “I can’t breathe.” 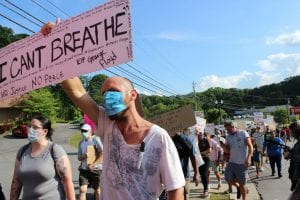 Everyone fell silent for 8 minutes and 46 seconds to recognize the length of time former Minneapolis Police Officer Derek Chauvin held his knee to George Floyd’s neck.

Cherokee County Sheriff Derrick Palmer spoke, at times in tears, over the injustices African American’s face and the acts of police brutality. He condemned the actions of the Minneapolis Police Department (MPD) and any officer who didn’t see the wickedness in the four former MPD members. 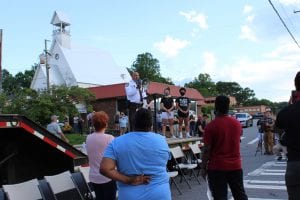 “It’s a long time past that law enforcement and community leaders need to stop, and no longer continue to be silent but speak out when we see injustice occurring,” Palmer stated. “No longer can community members and leaders turn our backs, turn our faces, and pretend these things don’t happen. We don’t only need to speak out for a change, but we need to make changes in our community both Republican and Democrat.”

The sheriff also stressed the need for the community and the nation to love each other citing the Bible and Martin Luther King Jr. Palmer and his staff have started discussions on how to end systemic racism in law enforcement and help their citizens. He added that this discussion only took place because of protesters raising their voices against unjust systems.

Police reform is at the heart of the issue, FYN asked Reed what next steps people could take after the protests:

“I think the next big step for police systems, police departments, and people in power that can really change is realizing that we need change. I think that us being here even in this tiny town is really impactful.” 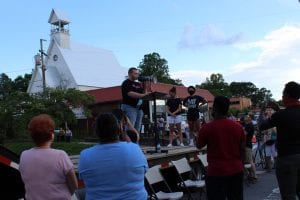 Jake Allen came up with the idea to hold a protest in Murphy.

Some individuals who disagreed with the protest lined the outskirts of the protest. One even shouted out “all lives matter.” He was quickly shouted down by others in the crowd, who echoed “not until black lives matter.” Others shouted that the disruptor “didn’t have a clue.”

FYN chatted with protesters, Kathyrne, Lynsey, and Talon who encountered him before the event started.

“He looked at us and said are you serious, and I just said yes sir, we are, and thank you, have a nice day,” explained Lynsey. “If you’re here for the wrong reason, go home.”

Once the peaceful assembly ended, the organizers and police handed out water to those in attendance and cleaned the streets of any trash.

To see all photos from the event, click here.