JASPER, Ga. – With focused consideration for students “not on track” in classwork, the Pickens County Board of Education heard an update on Distance Learning from Curriculum Director Anita Walker.

Pickens is returning as many students as possible to in-person learning rather than virtual learning. Walker noted that they have had students “not-on-track” returning to in-person for multiple reasons varying from a dislike or disconnection with the Pearson program, including some technical issues the school overcame in the first part of the semester, to issue with difficulty of use and focus to scheduling conflicts with younger children who need parental help with the programs while the parents might be working full-time.

While the schools have some experiencing difficulties, many others are succeeding and progressing in the virtual learning. More success was seen in lower grades, Kindergarten to 4th Grade.

Walker did note, however, that she felt that in-person is usually going to provide better educational experiences for the majority of students.

During her presentation, Walker pointed out some details that may be contributing to those not on track with the program including time spent with the program. She broke down data specifically focused on those in that category based on grade levels and compared them to the number of students spending more or less that 30 hours a week on the program.

Touching on support for the program and changes to bolster their efforts to support students and families choosing virtual learning, Walker noted the teachers efforts such as a tutoring program that virtual and in-person students can take advantage of. They are also putting extensions on some class work to aid in students needing that.

On the other side, with about 60 students moving from in-person to virtual learning for various reasons, Walker said the school encouraged students and families to come in a go over the program so that they would no and understand all of the requirements and needs involved with the program before fully committing to virtual learning.

Distance learning was not the only discussion for the day, however, as the board looked closer at results from a survey over the school calendar for 2021-2022. 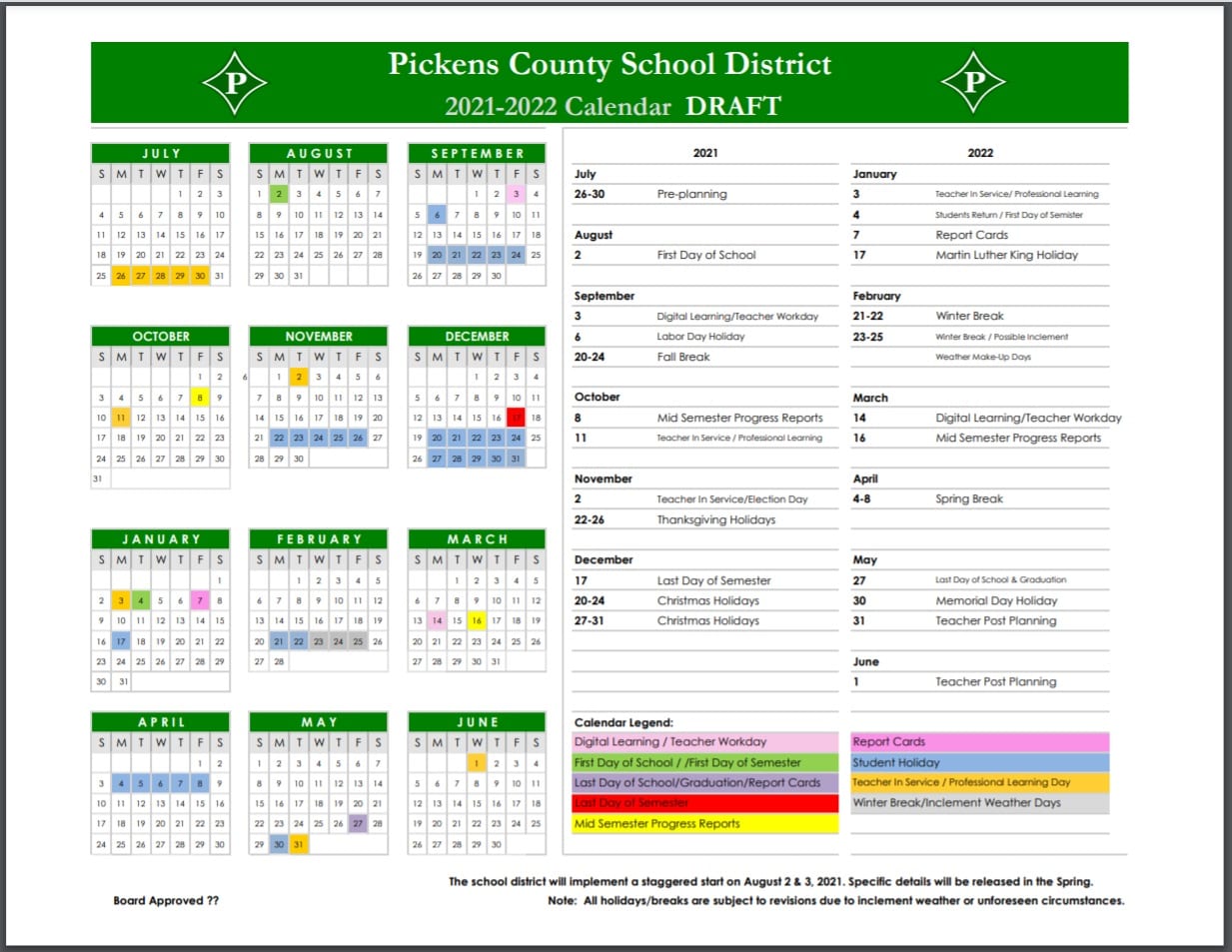 Nearing the mid-point of the school year, early discussion is already coming in for the next school year as Pickens County is going through the lengthy process of adopting a school year calendar.

According to Superintendent Dr. Rick Townsend, a survey was taken with input from students, parents, employees, and residents/business owners.

Of the 1209 replies to the survey, the boards report indicated that 500 were parents, 298 employees, 60 students, and 39 residents/business owners.

The vast majority emphasized a great importance on Thanksgiving and Christmas and not changing those breaks.

Additionally, 70% of the response said they would prefer a digital learning day for snow days or inclement weather rather than making those days up during winter break.

Many comments supported moving back the start date of school into mid to late August, but the board was told that hey would have to do away with several breaks to incorporate that change.

While the recommendation is set to be the same calendar as previously recommended, the board will be voting on the calendar next Thursday, December 10, 2020.