JASPER, Ga. – In a meeting all there own, IMPACT Pickens, a group of citizens who have banded together against certain members of the Pickens Board of Education, called for resignation of Board Chairman Sue Finley.

They did so with a large presentation showing text messages. The massive collection of 350 pages obtained through an Open Records Request showed the text messages and statements of Finley, Young, and references to other board members. The entire presentation is available (video to the left) and the group is more than willing to offer digital copies of the texts on thumb drives.

These texts vary from fragments to whole sections of conversations. They were presented by the Impact Pickens Organization during the town hall meeting that many, including former Superintendent Dr. Rick Townsend, attended. Though Dr. Townsend didn’t speak much, he did answer a couple of question from citizens about timelines and extra funds the school had.

IMPACT Pickens President Steve Lowe expressed his aggravation and frustration that board members would be “plotting” anything, but said these texts show the plans set into motion to oust Dr. Townsend as Superintendent and bring back former Superintendent Dr. Carlton Wilson. These texts, Lowe showed, happened during meetings as well as during executive sessions at times. With the main focus of the presentation on this plan to bring back Wilson, there were also other points when Chris Pence, Treasurer of IMPACT Pickens and main presenter at the Town Hall, pointed out plans to get Finley appointed Chairman and Steve Smith appointed as Vice Chairman. 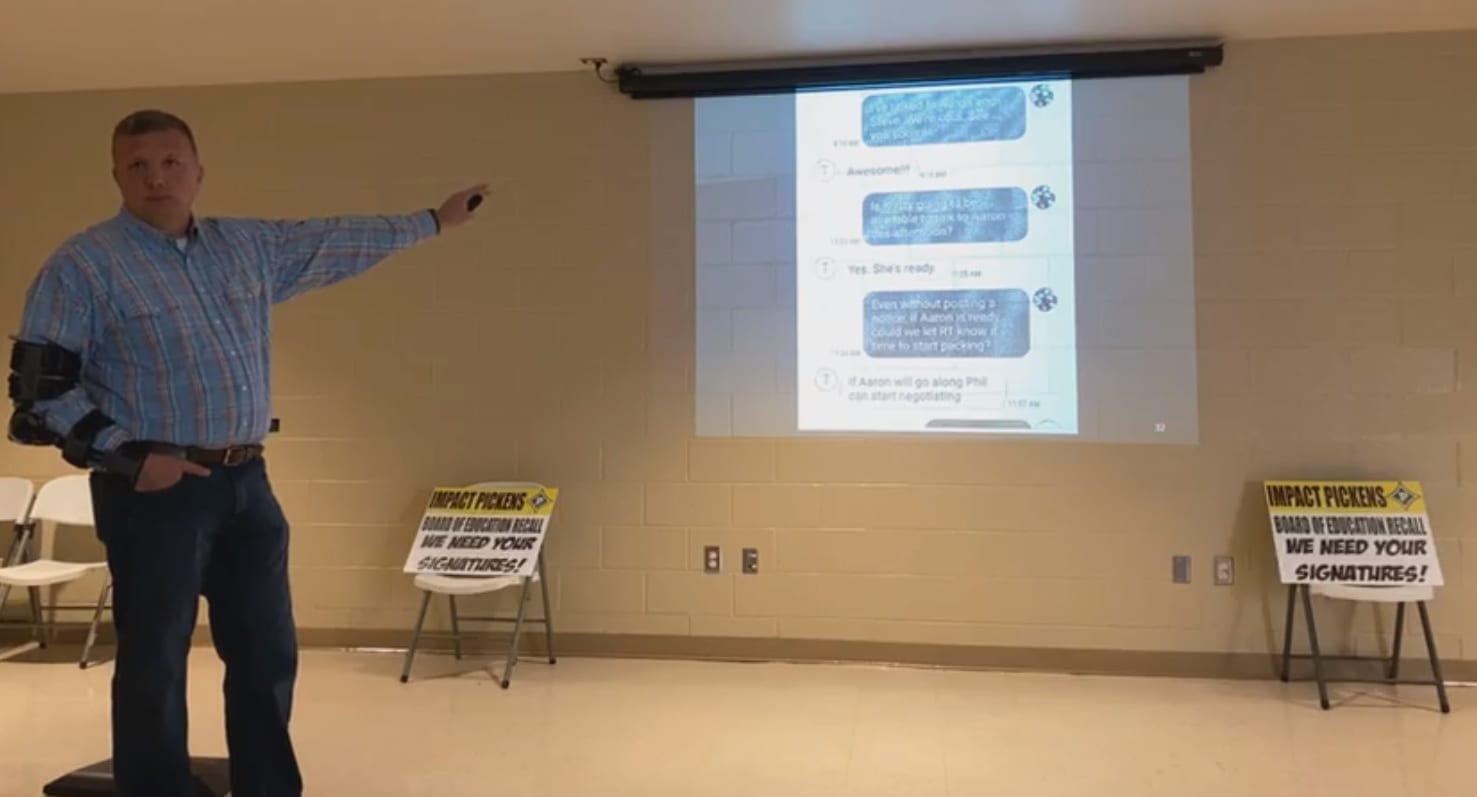 Chris Pence shows a text message obtained through the IMPACT Pickens Open Records Request during a presentation on April 24, 2021.

While Finley was appointed to Chairman, Smith was not appointed Vice-Chair. In one text, Finley stated, “The Queen is not happy.”

Pence said this was appalling as the text references the vice-chairman appointment. He said these texts messages and the fact that board members and administrators are planning things and discussing votes and intentions to vote outside of open board meeting, constitutes SACS violations. SACS is the Southern Association of Colleges and Schools. Their better known parent company, AdvancED, operates accreditations and certifications and was among the main concerns of citizens when Townsend was in the process of being terminated.

That process was drug out as citizens’ outcry over the $500,000 payout and other implications came in to focus. That process continued as the Board of Education attempted to negotiate with Townsend to find a different position in the school system for him instead of Superintendent.

With Townsend declining the offers, the Board moved forward with the buyout.

Besides Townsend, the texts included plans for the appointment of Aaron Holland, allegations about Holland, and implications for future plans. One text from Young to Finley stated, “If those two knew Aaron it wouldn’t be 4-0. Lol”

The texts evolve between Holland and Finley discussing plans and motions, willingness to do something in his first meeting, and possibly waiting until January.

Other texts openly admit to an “underground network” with orders to praise “him” to his face to ensure good evaluations while Sue says they are working as fast as they can to “correct the situation.”

Pence also posed allegations that Board Attorney Phil Landrum allowed Finley to redact certain sections of the text messages at her choosing.

Many of the texts continue following and leading towards the removal of Townsend with Finley allegedly  steering much of the operations to her own plans and desires. IMPACT Pickens highlighted only a portion of the texts in the packet, showing what they showed as the high points of the scheming.

One of the text messages from Tony Young specifically admits a meeting with “Phil” and “Amy” discussing a buyout number ready. IMPACT Pickens said this is a major issue as the text occurred on January 11, 2021 discussing buyout information and the termination of Dr. Townsend days before the emergency called three-hour executive session meeting of the Pickens BOE on January 15, 2021, or the “Emergency Called Meeting” of the Pickens BOE on January 18, 2021, discussing the termination of Dr. Rick Townsend.

Meeting in the Community Room, IMPACT Pickens presented their allegations against members of the Pickens Board of Education calling for recalls on April 24, 2021.

Additionally, early text messages before these emergency called meetings asked if the board should “bring Tony in before we ask Dr T to leave the room or after?”

The Organization has already spoken with SACS accreditation, Georgia’s Attorney General, and other agencies requesting investigations into the Board and these allegations.

Additionally, they are collecting signatures and moving forward with court cases of their own. Seeking board members and the Superintendent Tony Young to step down, the organization is pursuing recalls and any options they have available. They called for school personnel as well, but were warned that many teachers and staff have to worry about retaliation to their jobs or even their children in the school system.

In a separate video, Pence spoke to citizens thanking them for support. The organization operates through donations that they said they have used to acquire information such as the 350 page open records request for texts. He said, “I really think that now we’re showing the elected officials that the citizens are tired. We are tired of them wasting our money. We are tired of them not being ethical or moral.”

Lowe also commented on the response the organization has received from citizens saying, “We are really grateful for all you have done. It’s been humbling to see people come out…”