ELLIJAY, Ga. – Over two hours of citizens speaking for and against a moratorium on large subdivisions saw some division on the Board of Commissioners with a 2-1 vote approving the moratorium.

A “defining moment” is what citizen Tom Whatley called the August 23, 2021, meeting that was special called to discuss the moratorium. In it, Commission Chairman Charlie Paris said that he wanted to better manage some growth. With Post Commissioner Karleen Ferguson holding the dissenting vote against the moratorium, it came down to Post Commissioner Hubert Parker to second the motion for the moratorium and then provide the second vote for it.

The moratorium, according to the Board of Commissioners, will allow the county to partner with the Northwest Georgia Regional Commission to implement studies across the county for growth, infrastructure, and traffic, among others. The board noted Ethan Calhoun would be there NWGRC contact during those studies. The debate between citizens saw fairly even discussion on those speaking for and against the moratorium. The same debate fell to the commissioners themselves with those for and those against.

Even Parker and Paris debated and adjusted the original motion before coming to a final vote. Paris started the meeting offering a preliminary idea to start the discussion, a 9 month moratorium on subdivisions exceeding 25 lots. However, the first citizen speaking during the night, Joene DePlancke, questioned aspects of the moratorium to clarify what the county was discussing. DePlancke countered Paris’ preliminary idea and said 50 lots would be better.

After 2 solid hours of discussion, Parker offered a second to the motion for 9 months and 50 lots as he said, he was seconding just so they could discuss it. That discussion saw Parker suggesting 6 months instead of 9 months. Parker said, “I know how you will push to get it done in six months.”

Paris acquiesced to the request for six months with the understanding that the board could extend another three months if really necessary.

Much debate centered originally on the growth in the county, and the common theme throughout the night included “affordable housing.” Many developers suggested that an abundance of homes and subdivisions could aid in that, while others argued against the concept saying that high priced subdivisions are not “affordable.”

Misty Dove spoke to the commissioners about that concern. Working in social services, she noted there is a two year backlog in Fannin, Gilmer, and Pickens for help finding affordable homes for people in local jobs. 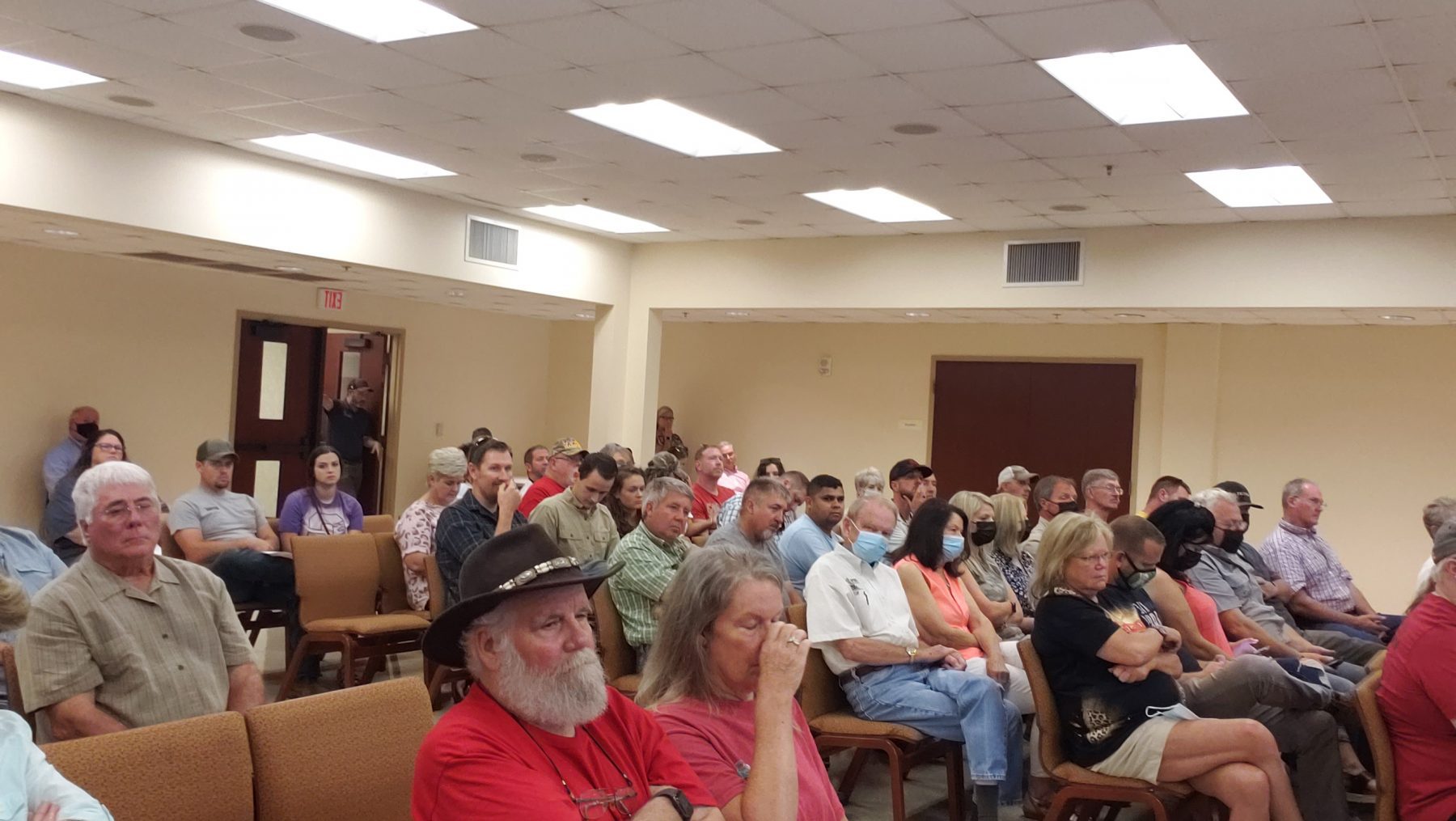 A packed assembly room saw several standing to listen and comment on the moratorium in Gilmer County during a special called meeting on August 23, 2021.

Yet, others still voiced concerns against any government answer to the housing. From overlay districts to impact fees and subsidized housing, many ideas and thoughts went back and forth through speakers. Keith Nunn, owner of Appalachian Supply, noted that many of the subdivisions being built by local builders were smaller comparative to some of those being reported that contain thousands of acres.

Many supported the idea to have these studies in the county alongside NWGRC, but the pushback came on a moratorium stopping building. Several speakers called it a halt to growth and a halt to building in the county.

Develle Frady noted a similar boom in 2006 and noted over 638 permits pulled in that year. This year, 2021, he noted 226 permits this year as of August when the meeting was held. He went on to voice concerns against the moratorium and spoke about many of the lots developed over the years are still empty. He also pointed to panic in the early 2000’s and estimates that Gilmer would be 44,000 people by 2010. He said that now, in 2021, there still isn’t 44,000 people.

Frady said that he’s been in the county for 57 years since he was born here. However, he said that he was 30 before he could make a decent living here.

Many citizens pointed to the Comprehensive Plan in the county and areas. Post Commissioner Karleen Ferguson noted that she put a lot of work into the plan and wants to see it used better.

Ferguson said that she believed the testing and the Regional Commission’s work could be done while continuing the growth and building in the county. She said, “I don’t think we need to stop growth, stop building, stop anything right now.”

She went on to add, “I think you’re going to be hurting us, by putting this moratorium on, on our chances for affordable housing because the prices will go up. And six months? Unfortunately, I know all too well now how quickly the government works, and it’s not fast… I don’t know how soon, now we have COVID coming back in, that will happen with this testing.”

Like many present, Ferguson agreed that the testing should be done. However, she said she was not for the moratorium.

With the 2-1 vote, Gilmer County is under this moratorium currently. Paris said the county has already engaged the NWGRC for testing and begun the process in recent days. Now, with the moratorium in place, the county is waiting for results and is likely to be looking at zoning and regulations on the larger subdivisions in the coming future.