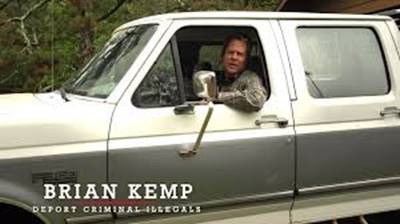 Remember the primary election campaign ad in which Gov. Brian Kemp told us – and the world – “I got a big truck, just in case I need to round up criminal illegals and take ’em home myself?”  We do. Heard anything on illegal immigration from him since 2018? We haven’t.

Even though states cannot deport illegal aliens (only the feds can do that), in 2018 Kemp promised to create a “Track and Deport Plan.” And he promised to create a criminal alien database. None of this has happened and he is defiant in his silence because he thinks you will also be silent.

He must answer for this betrayal. At least Joe Biden admits which side he is on.

D.A. King at the Dustin Inman Society has compiled an extensive Brian Kemp file over the years that is a ‘must read’ for conservatives who are taking a second look at Kemp.

“It’s not only the fact that Gov. Kemp showed us who he really is when he pulled his “Big Truck Trick” on trusting conservatives. Georgians are being displaced from badly needed jobs by black market labor and criminal aliens are being released from county jails to go on and commit more criminal acts”, D.A. told me. “He has turned his back on Georgians who depend on leadership on the issue while DHS tells us we have more illegal aliens here than Arizona.”

D.A.’s file reminded us that when he was Secretary of State, Kemp spent tax dollars to create foreign language videos to help non-English speakers register and vote in Georgia. Yep, he did that.

“Kemp’s State of the State silence on voter security should not be ignored, considering Georgia issues foreign nationals temporary drivers licenses and ID that are nearly identical to the ones eligible American voters get.” Most people are going to be stunned on this one. D.A. King explained to me that there is no law to prohibit these non-citizen drivers licenses from being considered “proper ID” for voting. You need to read about that from D.A. too.

We hope you will take a long look at the “Brian Kemp” file at the Dustin Society website. You can see some of the now forgotten Brian Kemp campaign ads there.