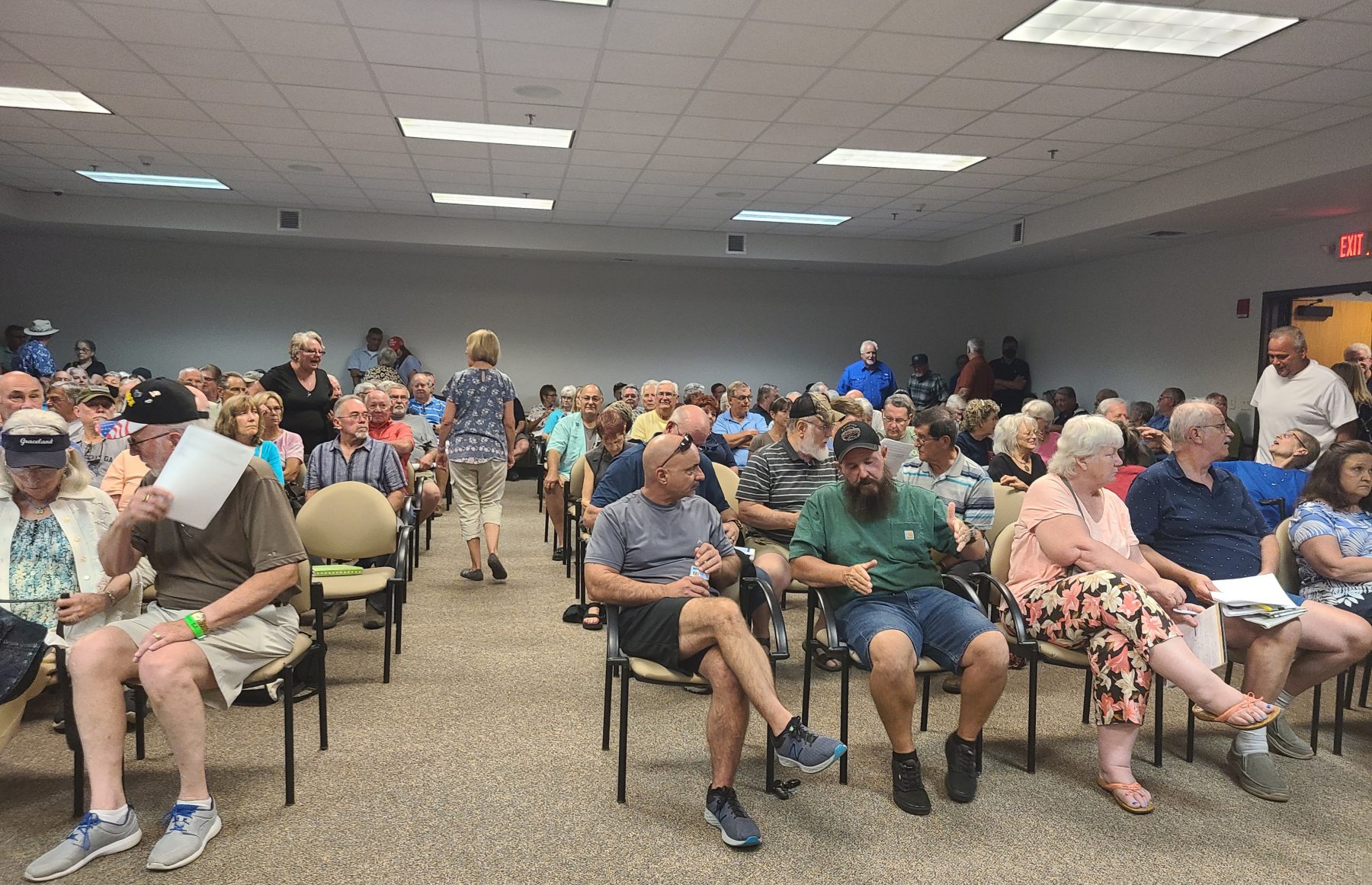 BLAIRSVILLE, Ga – A raucous crowd turned out in force to discuss taxes and property reevaluation after notices hit residents’ mailboxes at the start of the month.

The meeting was moved to the jury assembly room and some still had to stand for the 2-plus hour-long meeting focused on property values and taxes. Assistant Police Chief Shawn Dyer instructed the crowd to respect each other, or an officer would remove them from the meeting. The cantankerous didn’t always heed the advice after the meeting began, but no one was escorted out of the room.

“The growth is what causes expenses to go up. We all know that. No matter where you’ve been before. The more you grow the more those expenses are going to go up. And we will continue to prepare for them, but these are not simple solutions, and they all take time, careful consideration, and planning. We have and will continue to be working with the Georgia Mountain Regional Commission,” Sole Commissioner Lamar Paris opened.

Union County’s also working with the Carl Vinson Institute, University of Georgia, and TBT to assist with future planning and find other revenue options to help lower property taxes.

“Sales tax captures all people in a county whether they are property owners, renters, employees, visitors, short-time residents, or short-term rental and we certainly want them to assist in paying with the operation of our government,” Paris said. “For anyone to say that we are trying to grow the county without any thought of planning our future is simply not accurate.”

Stan King from GMASS, the company hired to reevaluate property value in Union County, explained that the estimated tax on the bottom of the reassessment notice wasn’t the tax for 2021. The taxes for 2021 haven’t been set as of yet because the millage rate hasn’t been established.

“We’re going to make every effort to cut that mill rate as much as possible. You’ve got my commitment that we’re going to try to do that and cut as much as we can. But we’ve also got these increased costs; they’re not huge, but they’re going to be enough because of the sheriff’s department – no offense to the sheriff’s department – but it’s hard. We’re finding firemen the same thing,” Paris explained about the millage rate and increased public safety departments. Many counties are competing for employees and they’re going to the areas offering the higher-paying jobs. 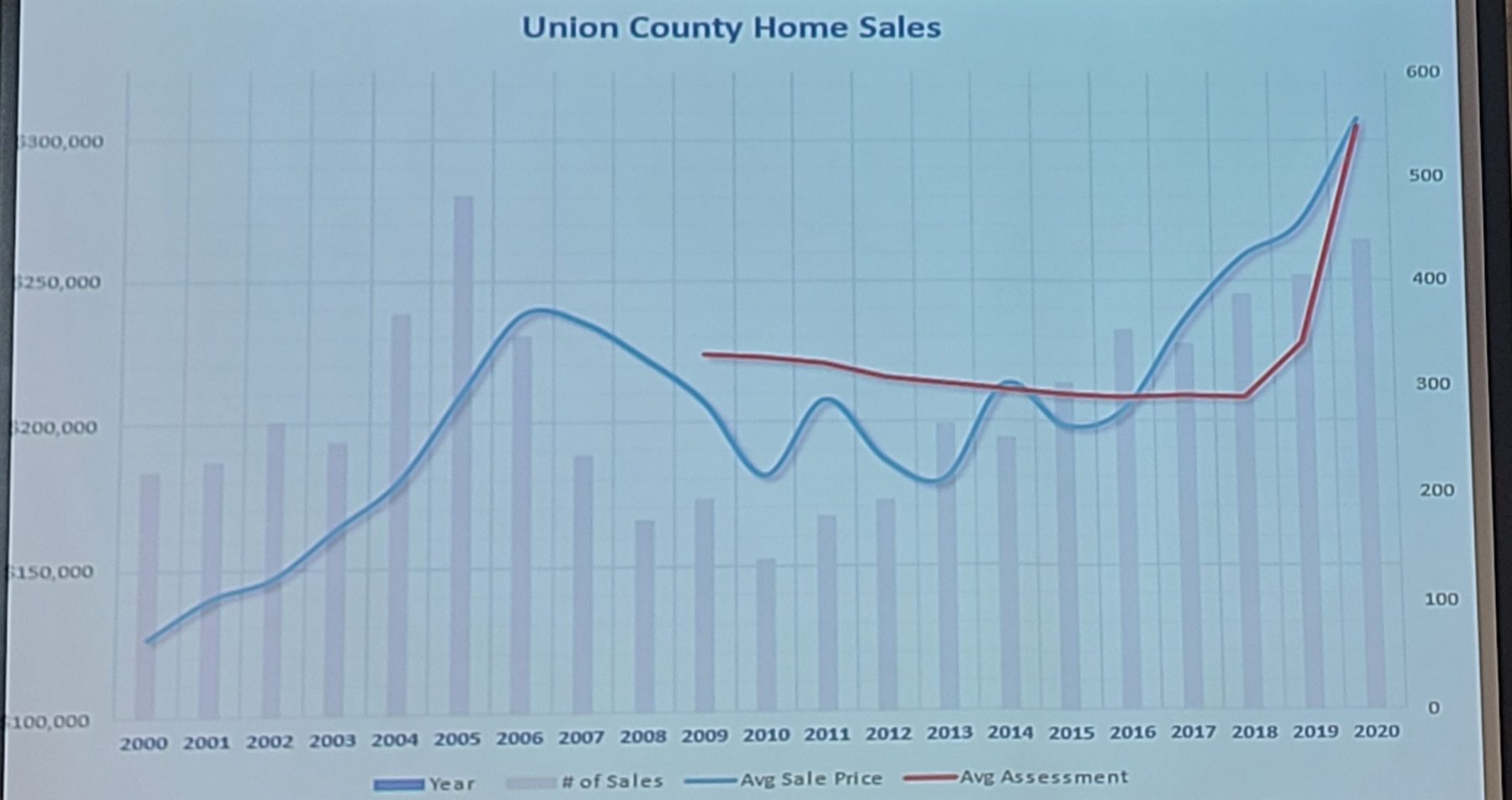 Chart of Union County home sales. The blue line indicates the average sale price and the red line is the assessed value.

The number on the reassessments uses last year’s millage rate and last year Union County experienced a 17 percent tax increase on the county side. The county and the school each propose a separate millage rate and then it’s combined for the overall rate.

Even with last year’s tax increase, Union County had the 12th lowest tax rate in Georgia. Previously, it was the third-lowest.

The property reassessments were contracted out in 2019 and just completed in 2021. The revaluation was necessary because Union County had fallen below the state’s Fair Market Value requirements.

King explained that a county wants to fall between .36 and .42 in assessed Fair Market Value, but Union County had fallen below that range. If a property reassessment hadn’t taken place, then the county would have been fined by the state. The new rate places Union County into the .38-.39 area.

In other words, the value of home sales in Union County has continued to exponentially increase, but the assessed value largely remained flat. The reassessment catches property values up to the home sales value.

“In 2016, when the market started to increase in the value of home sales… I really picked out home sales because that’s the predominant class of properties that make up the tax digest,” King explained. “Our assessments being so much flatter than what the market actually does. It’s our duty to mirror the market.”

The county’s requirement by law to appraise all property at fair market value every year. The physical assessment only has to take place every three years. 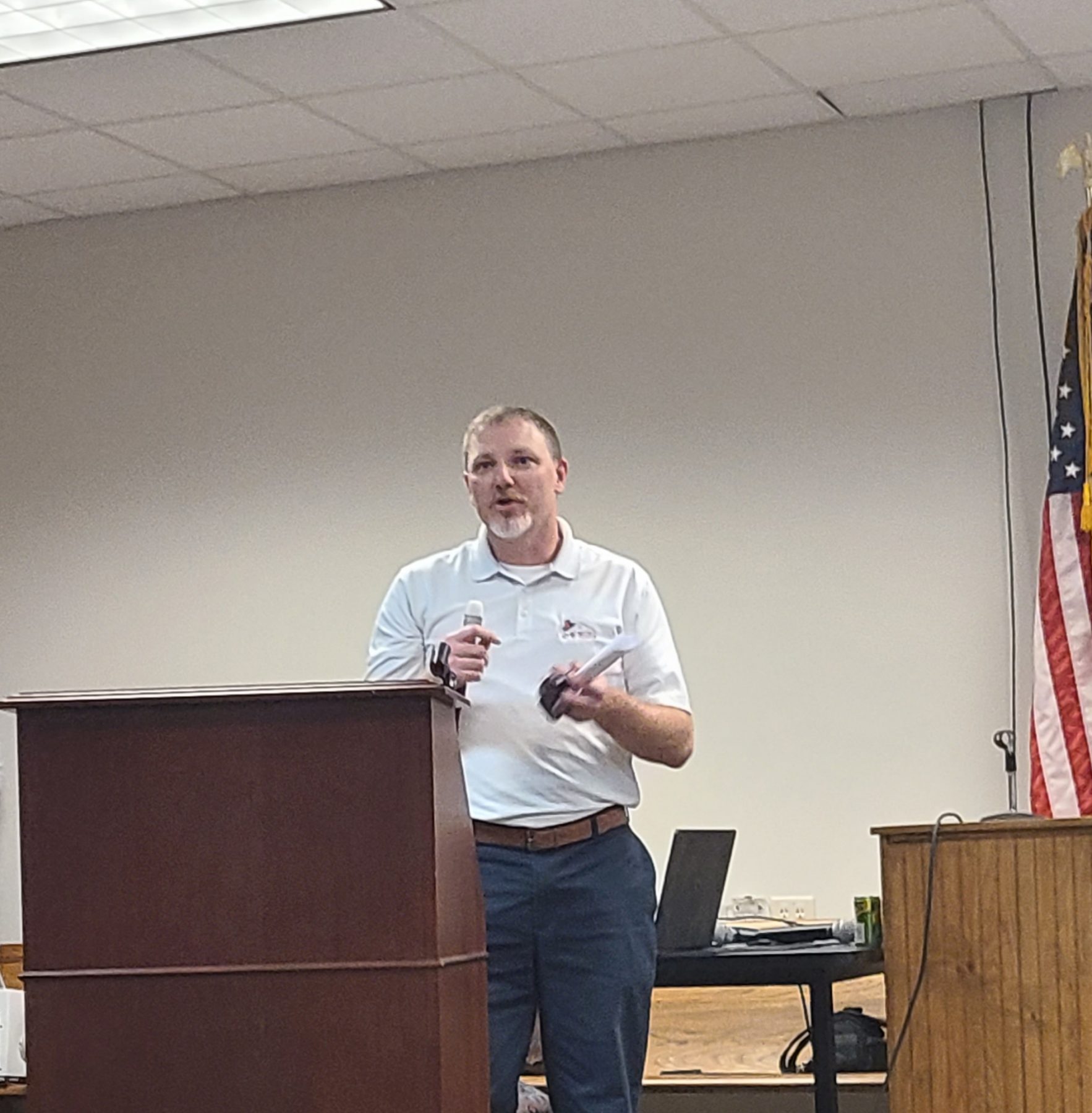 After the reassessment, the assessments were brought up to Fair Market Value compared to the sales price.

This is why some people are experiencing property value increases of 100 percent or more. As home sale prices increase, then the assessed value of homes needs to match.

The home sales value continues to increase in North Georgia, which means values will probably need to be adjusted again.

However, once the housing market takes a downward turn, property owners need to make a report of that as well. Appraisals are typically a year behind concerning market values. Still, the market typically corrects itself.

“Between January and April, I would encourage everyone to file their [property] returns just like you do on your income tax, you’re supposed to do it on your property tax. Most people do not,” King said. “You’re paying taxes based on your property on January 1.”

Property owners still have time to appeal the new assessments, around 25 days. The tax assessor’s office can approve or deny exemptions depending on the property, such exemptions include homestead and agriculture. Flood plains and easements are typically taken into account at the time of evaluation. However, there’s no item that you can appeal for the amount of value increase.

The appraised value measures from the outside-to-outside wall, but there’s a difference in square footage if it’s heated or not.

“There’s an inflationary number that will be given to them of what they need to roll that back to on the inflationary growth. So, if you have your property and you’ve done nothing to that property, but we’ve increased the value all that is inflationary – the whole value difference is inflationary,” King added about the tax digest and millage rate process.

The tax digest is made up of more than just real estate such as heavy equipment, auto tags, timber, planes, and real property.

One veteran and former police officer Kevin Bloodworth spoke as part of the meeting and stated the value of Union County is in its citizens. He also criticized the county’s communication methods about the property reevaluation, saying if it had been better explained, then people wouldn’t be as angry.

“You got people out here living on $900 a month or less in Social Security so even a $100 increase in taxes plus the congruent increase in their insurance that’s a meal for them. They can’t drive somewhere but a couple times a week. Inflation is up 2.5 percent. Gasoline is up a gallon. The head of the federal reserve is telling us this time next year we may be under crushing inflation,” Bloodworth remarked. “Your job sir and that of your staff is finding ways to make this palatable and acceptable for the value of our community.”

“A few years ago, Dawson County instituted impact fees to slow their growth instead it only sped up their growth. And today while our property tax rate was 18.9 mills, 12th lowest in the state, Dawson County, a county with similar size, population, and property values, was 23.6 mills, which made them the 18th lowest in the state,” Paris explained. “If you live in Dawson County, they’re going to make $5 million to $6 million more on their property taxes than we are based on last year’s mill.”

Paris reiterated that the last thing he wants is uncontrolled growth in Union County, but some growth is necessary to maintain the quality of life in the area. He touted Union General Hospital and local small businesses. They must be considered when developing the county.

“There’s nothing I would have loved better than to have left our property values just like they were. I did not make that decision. The board of assessors made that decision, and they made that decision because the state of Georgia was going to come down because it was impossible to keep up with values,” Paris commented.

The Sole Commissioner explained that 48 percent of Union County is owned by National Forest Service, 3 percent is owned by the TVA, and 20 percent is covenant-protected farmland. Additionally, Choestoe, Track Rock, and Suches don’t have access to public water. As a result, massive developments aren’t likely to happen and drive property values up. Without public water, it’s harder for developers to recoup their investments when they must build on 1.5 acres and include a well and septic system. 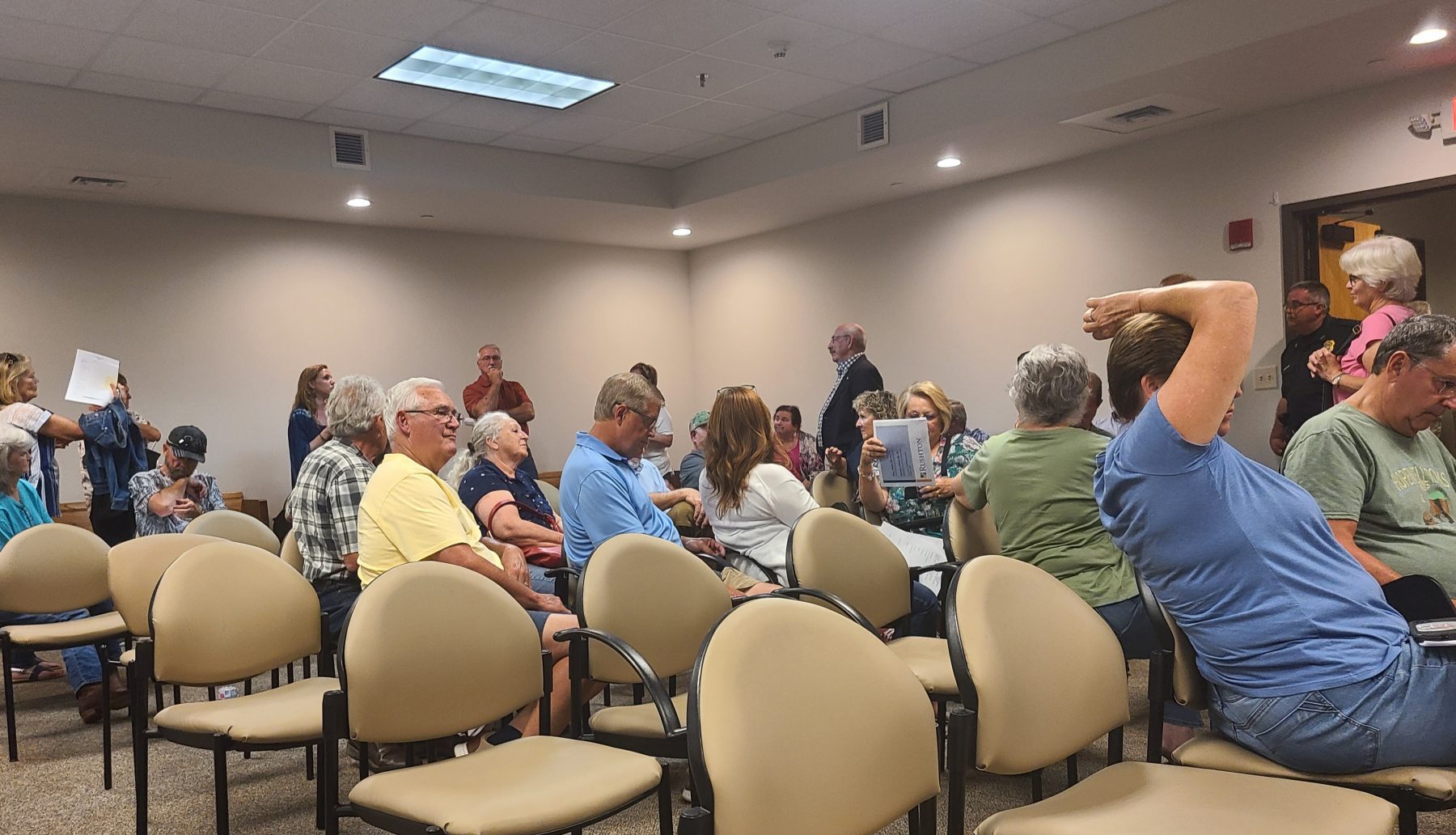 Paris took questions after the meeting ended on the topic.

As for how Paris operates his monthly meeting, he explained that anyone who believes they have something important to say can be placed on the agenda. Additionally, he said the question-and-answer session isn’t recorded because it doesn’t have to be. However, they do discuss every issue brought up during the Q and A sessions.