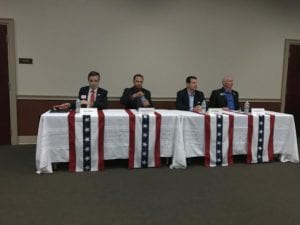 DAHLONEGA, Ga. — Four of the candidates vying to become the Chairman of the Georgia Republican Party brought their campaigns to Lumpkin County Saturday in a debate broadcast live on fetchyournews.com.

Republicans have won all statewide races in Georgia since 2014 and helped President Donald Trump carry the state in November but the state party is mired in debt and struggling to raise the funds heading into the 2018 mid-term elections. The party has just over $125,000 in its coffers and nearly twice that amount in debt.

ALEX JOHNSON
At 28, Alex Johnson is the yongest person in the race. After law school at Georgia Southern, he ran for State Senate in heavily Democratic DeKalb County and managed to win 40 percent of the vote. He is currently legal counsel to the DeKalb GOP. He also ran for Ga. GOP Chairman in 2013 and 2015.

Johnson said, “We need to focus on the credibility of our brand. We need to be out in public doing things, getting people involved to let them know what the Republican Party stands for. We had 2 million Republica oters in this last election and still many people don’t know (Ga. GOP) exists. We lost Cobb and Gwinnett County to Hillary Clinton and that is not good. Our county parties are losing membership. We need to provide services to them and to the voters to make the state Republican Party again.” You can find out more about Alex at http://www.advancethegop.com/about.html

JOHN WATSON
John Watson, a professional lobbyist and fund raiser is well entrenched with the party establishment, having worked on the Atlanta Chamber of Commerce and Georgia Chamber as well as the Georgia Lottery boards. He was former Gov. Sonny Perdue’s chief of staff and an adviser to Sen. David Perdue. He supported Ohio Gov. John Kasich in the presidential primary and strongly supported Gov. Nathan Deal’s Opportunity School Districts, something Georgia voters overwhelmingly rejected.

“The Georgia Republican Party is at a crossroads,” he said. “After 15 years of Republican dominance, the Democrats have much more money than we do. If that continues, we have a chance of losing the state. With the 2018 election just ahead, we need to go on a wartime footing. I have a lot of financial experience and I have also worked with the grass roots of our party.”

MICHAEL MCNEELY
Michael McNeely, 44, is the state GOP’s vice-chair and a top surrogate for President Donald Trump. If elected, he would become the first African-American chairman of a party that has struggled to win over black voters. He served in the Army National Guard and 14 years as a police officer. He is currently vice chairman of the Douglas County Republican Party and political director for the Georgia Young Republicans. He said he’s committed to reviving the party’s fundraising effort and growing the conservative base to help keep Georgia a red state.

McNeely said, “I am a fiscal and social conservative. I stand on those principles. I’m a strong right-to-life advocate because I have a wonderful mother and father who adopted me. I’ve worked hard to get Republicans elected so our families can have the things they need, because they earned them.

MIKE WELSH
Mike Welsh is the chairman of the 12th District Republican Party in Augusta. He opened, funded and staffed the only non-metro Republican Party Victory Headquarters during the 2016 presidential campaign. He was considerably poised considering he and his wife Susie had just become grandparents for the fourth time earlier in the day. His plan is to help the state party develop a digital infrastructure to bring the party to the leading edge of political engagement with voters, eliminate party debt and build a cash reserve.

Welsh works with Augusta Coating and Manufacturing, LLC after spending 17 years as a consultant, helping companies develop strategies to locate, evaluate and develop new buiness opportunities while working with banks and potential investors. “My focus has always been on helping companies become lean, mean and efficient. That is exactly what I want to do for the Georgia Republican Party. I have the skills and talent to do that.”