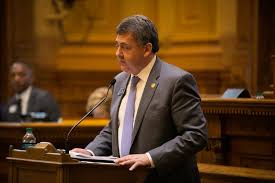 ATLANTA, Ga. – Before heading to the state capitol and the start of the 156th General Assembly, Republican Senate Majority Whip Steve Gooch expressed concern about the events that took place Jan. 6 in the U.S. Capitol Building and the nation’s move toward socialism.

Five people died and more than 40 were arrested after a mob stormed the US Capitol and overran Capitol Police. While the liberal news media blamed Trump supporters, others have said it was Antifa.

“I am really sad it happened,” Gooch said. “It was a complete disappointment and a disaster. If the people that did that were Republicans, they should be ashamed of themselves and I hope they are arrested. But we don’t know who it was. The protests we saw in Atlanta last year are not acceptable either. We should not allow people to protest with violence. They should not damage public or private property or do harm to other people.”

Republicans are still angry over the defeat of President Donald Trump in November and Senators David Perdue and Kelly Loeffler on Jan. 5.

Gooch was one of only nine state senators to sign a petition calling for a special session of the General Assembly. The petition failed to gain enough signatures.

“I can tell you that out of Georgia’s 11 million people, there are a lot of upset folks over what is happening in this country the last 10 years,” he said. “We continue to move toward socialism and away from our conservative values and our morals. “We’ve got to find a way to get our people back on track, to get them focused on family, Christianity and doing the right thing. That job is going to take more than elected officials. It’s going to take citizens everywhere to make that change.”

“I don’t believe either is healthy for this country,” Gooch stated. “We should just let the transition take place over the next two weeks. The President has acknowledged he will move out of the White House and guaranteed a smooth transition to the next administration.”