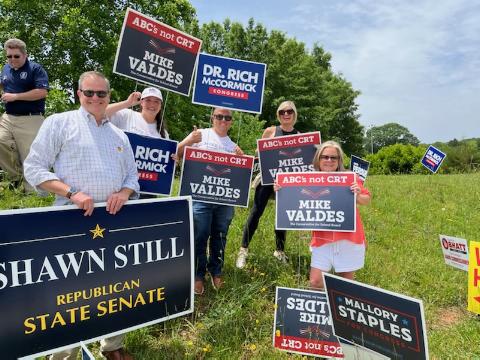 FORSYTH COUNTY, Ga. — Less than 24 hours after he defeated Erin Knight to win the Republican nomination to the Forsyth County Board of Education in District 5, Mike Valdes was tired but eager to get started.

Valdes, the father of three school-aged children ran on a platform that calls for teachers and parents to set the agenda and to ban critical race theory and diversity, equity and inclusion from the school system.

He spoke about transparency often during the campaign and on Wednesday morning, he hammered that point home again.

“We need to open up the books,” he said. “We need to have public debates and do the business of the school system out in public the way it is intended to be. Let’s get back to transparency and accountability.”

Another hot-button campaign issue he addressed often was the effort to remove books and material that contain obscene or pornographic material from the schools.  Media committees are being formed now to accomplish that. But he added the committees seem tilted in favor of the school system.  “We’re trying to change that and I think we will. The one thing I can do is push and continue to push in that direction.”