ELLIJAY, Ga. – With the presidential election less than a month away, yesterday saw Gilmer County’s first day of early voting with lines stretching far out the door and down the sidewalk in front of the courthouse. 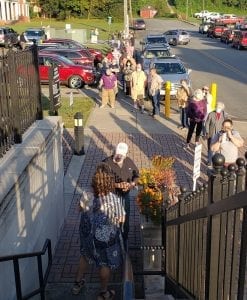 Voters line the street on Tuesday, October 13, 2020, as Gilmer holds its first day of early voting for the Presidential Election.

According to Chief Registrar Tammy Watkins, the county saw a total of 470 people vote early on the first day.

This is no shock, however, as the Registrars Office also reported record breaking turnouts this year in the June elections. At the time, Registrar Sherri Jones said that Friday, June 5, 2020, the final day of early voting, was their busiest day of the entire cycle.

However, that busiest day ended with 161 voters casting their ballots. This Presidential Election is already shattering any expectations from citizens and authorities. The line stretched long well past noon yesterday, and was wrapping around the square today as citizens lined up in the opposite direction.

Early voting has also taken up extra space. The Board of Commissioners, amid budget meetings this week, held their meetings in the Jury Assembly Room. While most of their meetings are being held there currently, due to needs for Social Distancing amid the Coronavirus, they also said their conference room is being used by elections and office staff as the early voting machines are spreading out through the Registrar’s Office to supply enough machines for early voting while also maintaining the same Social Distancing guidelines. 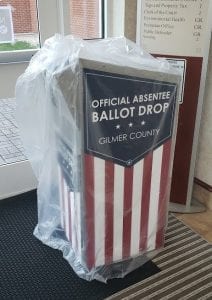 Gilmer’s new absentee ballot drop off waits for the cement to dry for its new location in the courthouse parking lot.

Citizens don’t seem to mind as some, who have never voted, are showing up for the first time ever. One person, who declined to give his name, said he searched and registered this year just to vote against those he saw as attacking the president and the current office.

Gilmer is also adding a new drop-off box this week for absentee ballots. Set in the parking lot of the courthouse, the new box is to be bolted into the ground allowing those dropping off ballots to not have to wait in line.

Watkins said in a meeting with the commissioners last week before early voting that absentee ballots could also be seeing minor issues with some as they originally request an absentee ballot or are on a rollover absentee list, but want to cancel their absentee ballot and vote in person.

Watkins explained that this happened in the last election as a large number of ballots request forms were sent out.

Additionally, if a request is marked with certain health or physical disabilities, these people can be put on a rollover list for absentee ballots as well. 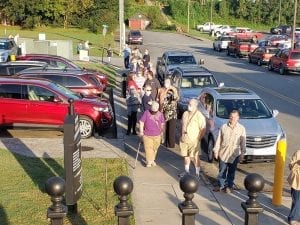 Gilmer’s early voting line stretched down the sidewalk and around the corner of the Courthouse’s parking lot to enter the Registrar’s Office to vote.

While not an issue to handle and fix, the massive turnout already seen will inflate problems in this election as staff are keeping up with the number of people while also dealing with the usual corrections and details that come normally with early voting.

With no clear number on the amount of absentees that could be since we are so early in the cycle, the first day of early voting nearly tripled the busiest day from the last election. As the campaigns continue and more people find time to go to the Gilmer County Courthouse, 1 Broad St., in Ellijay, the numbers are looking like they will only go up from here to shatter previous records in early voting for the county.