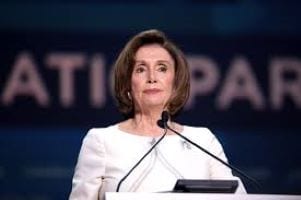 CNN obtained the arrest warrant from the FBI. In the warrants, the agency charged Meredith with written threats and possessing an unregistered firearm and ammunition.

The alleged text said that Meredith was thinking of “putting a bullet in [Pelosi’s] noggin on Live TV.” He also allegedly told the text recipient he went to DC with a plethora of ammunition, according to court documents.

Other alleged texts quote Meredith as predicting that “many in our country will die” and further threats and slurs against Pelosi. The FBI statement of facts also claims that Meredith sent a photo in black face couple with the message, “I’m gonna walk around DC FKG with people by yelling “Allahu ak Bar” randomly.”

According to the FBI, Meredith was staying at the Holiday Inn in Washington and allowed agents to search the room, phone, truck, and trailer. After obtaining a warrant, they found a Glock 19 nine-millimeter pistol, a Tavor X95 assault rifle, and hundreds of rounds of ammunition in the trailer.

Hiawassee Police Chief Paul Smith told the AJC they were aware of Meredith and he recently moved to Hayesville, North Carolina. Meredith moved to Hiawassee from Atlanta.

All of Meredith’s social media accounts have been taken down. He is one of 120 identified rioters that stormed the Capitol on Wednesday. Since the event, Pelosi and government officials on both sides of the aisle have called for the resignation of President Trump. The Speaker plans to introduce articles of impeachment today, Monday, January 11, 2021. If impeached, President Trump could not run again in four years and would lose a certain amount of presidential protections.