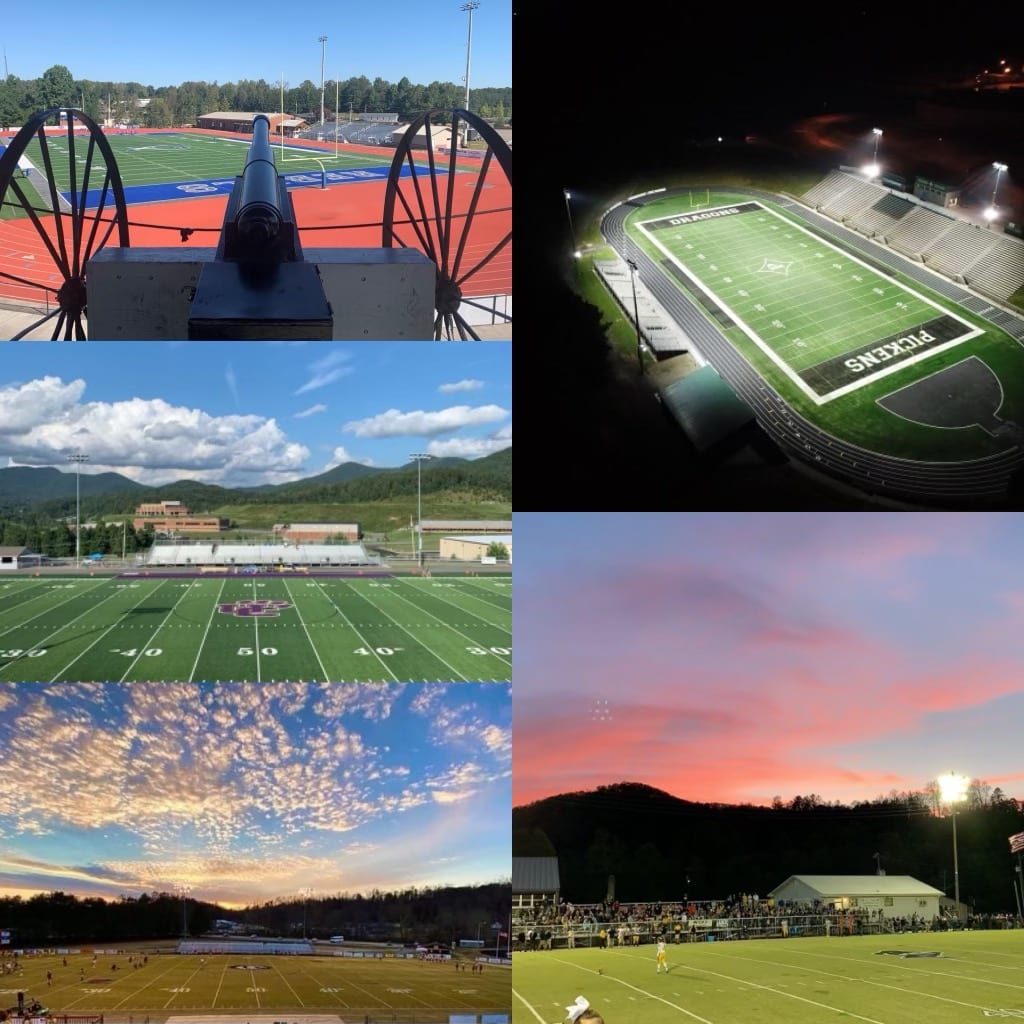 Just here to spark a little bit of fun debate during the off-season! Our writers blind voted on their favorite stadiums in our viewing area, and these were the results. I’m sure everyone will have their own opinion, so let us hear your opinions and what we got wrong!

Each stadium write up is written by a member of the schools community.

Although the stadium has no nickname, it is often been referred to in the past as “The Battlefield”

Fannin County may have the best entrance in all of Georgia. The Rebels walk out of their locker-room directly to a gigantic blow up Fannin County Football Helmet.  Coach Cheatham usually is the 1st one to break open the facemask on the helmet and the Fannin County Football team walks onto the field with arms locked. The cannon fires, the smoke rises, music blares, lights go out and then flash from pole to pole. It is a striking entrance and one that every High School Football fan needs to see. 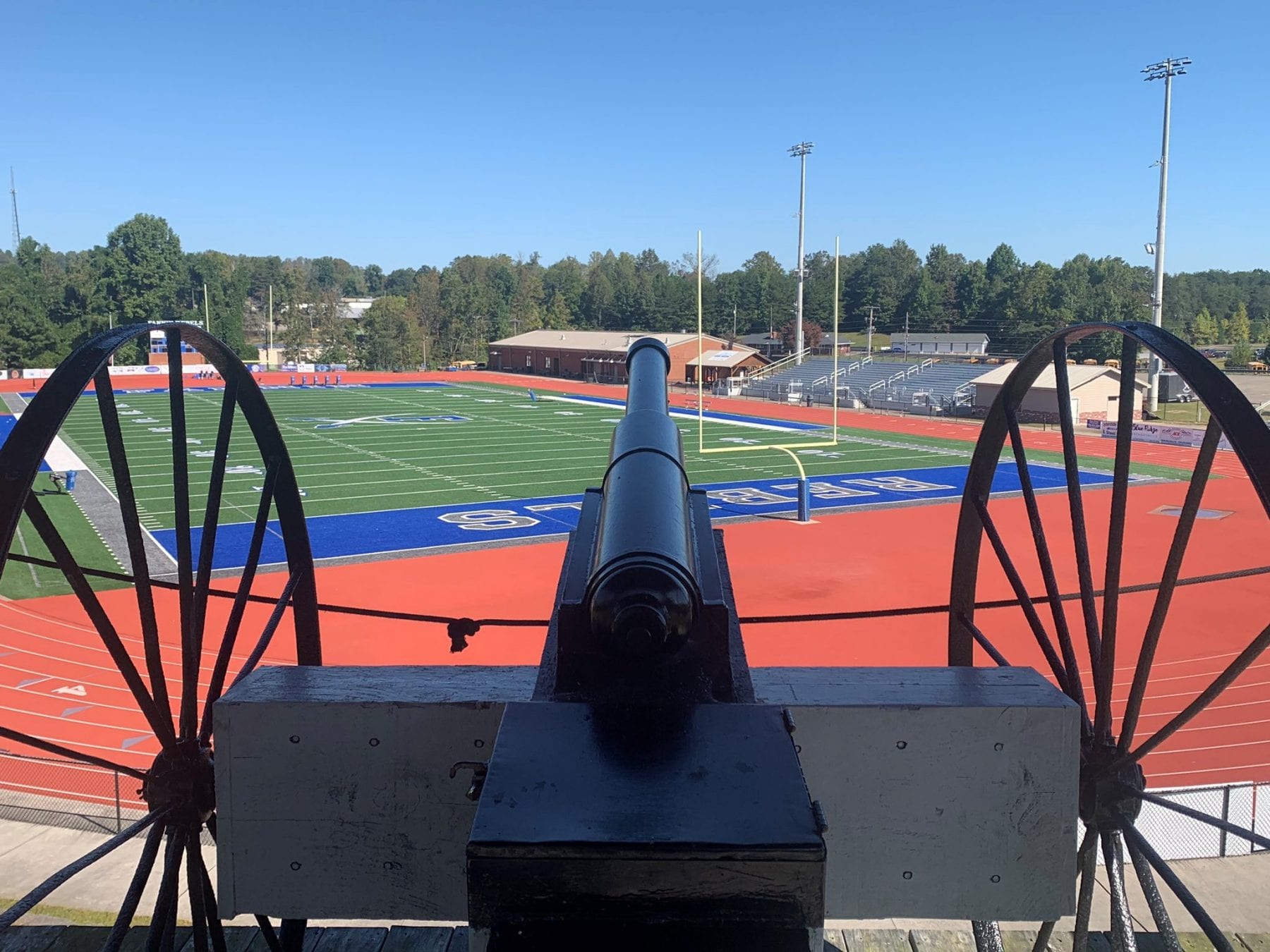 Metallica’s “For Whom the Bell Tolls” is played and sparks the Rebel Nation to make noise on 3rd Down. 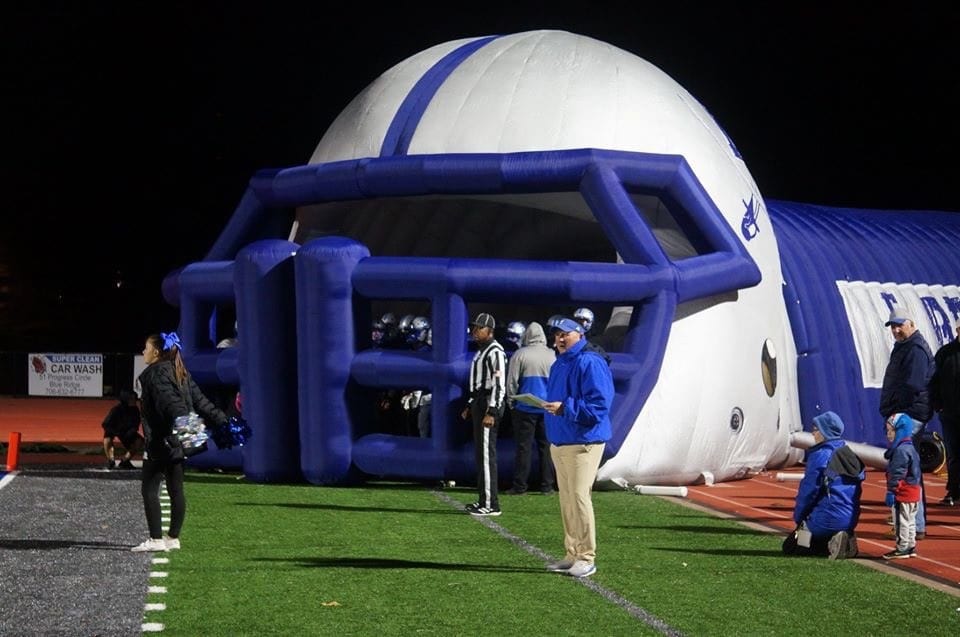 I think if you witnessed a game here during Fannin County’s magical season last season you would agree with our choice.

The Stadium is a true 12th man Atmosphere. Powered by everything we have mentioned and the award winning Fannin County High School Marching band, the cheerleaders and “The Blue Crew” ( Student Section)  Fannin County is our choice for Top Stadium in our coverage area.

David Gentry Field at Bob Hedrix memorial stadium is nothing short of picturesque. The location of the stadium is one of it’s best qualities, being right off the road and allowing passers by to honk their car horns and cheer on the Dogs, whether that be on Friday night or Tuesday afternoon at practice. Watching the team walk down the hill at 7:27 on Friday night just before kickoff is electric. The sun setting behind the visiting bleachers on a crisp fall evening is really something to behold. Dont even get me started on the sheer history of what’s been accomplished on that field. 10 state championship teams have played under those lights, and for the past 40 years, perhaps the greatest High School football coach of all time has coached on that sideline. Add to that JR Carrol shouting “1st and 10 Bulldogs” over the speakers, you’ve got a recipe for one of the greatest high school football atmospheres in the country. 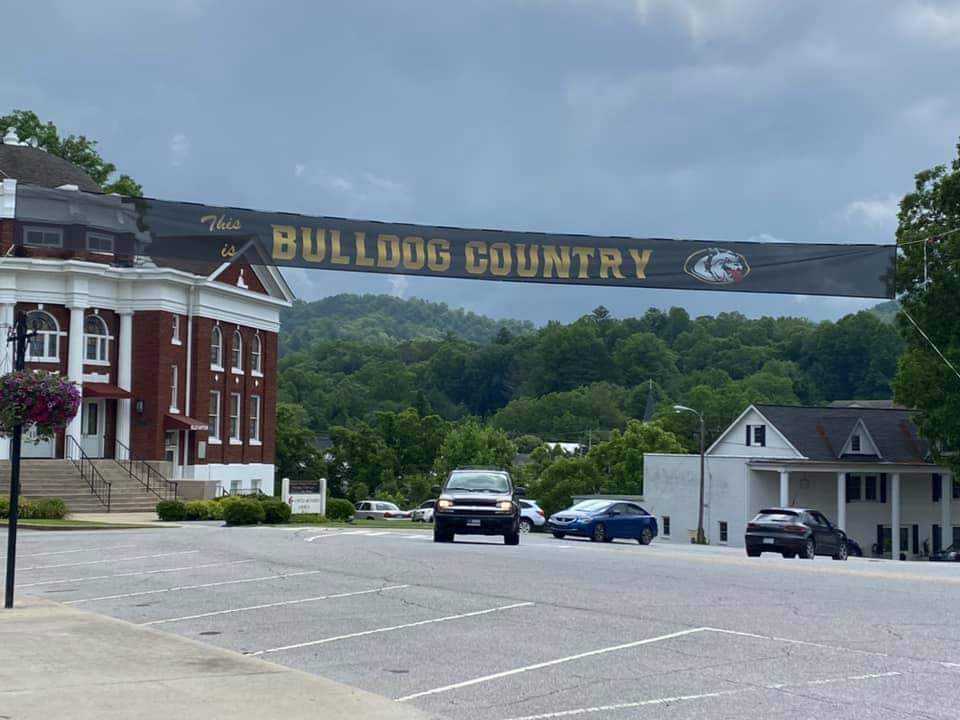 They don’t call it “BULLDOG COUNTRY” for nothin’.

Former Dogs Head Coach & Hall of Famer David Gentry said, “There’s no better high than the one you get on Friday nights in Murphy between the hours of 7:30 & 9:30. That feeling you get for those two hours, it’s unattainable anywhere else.” 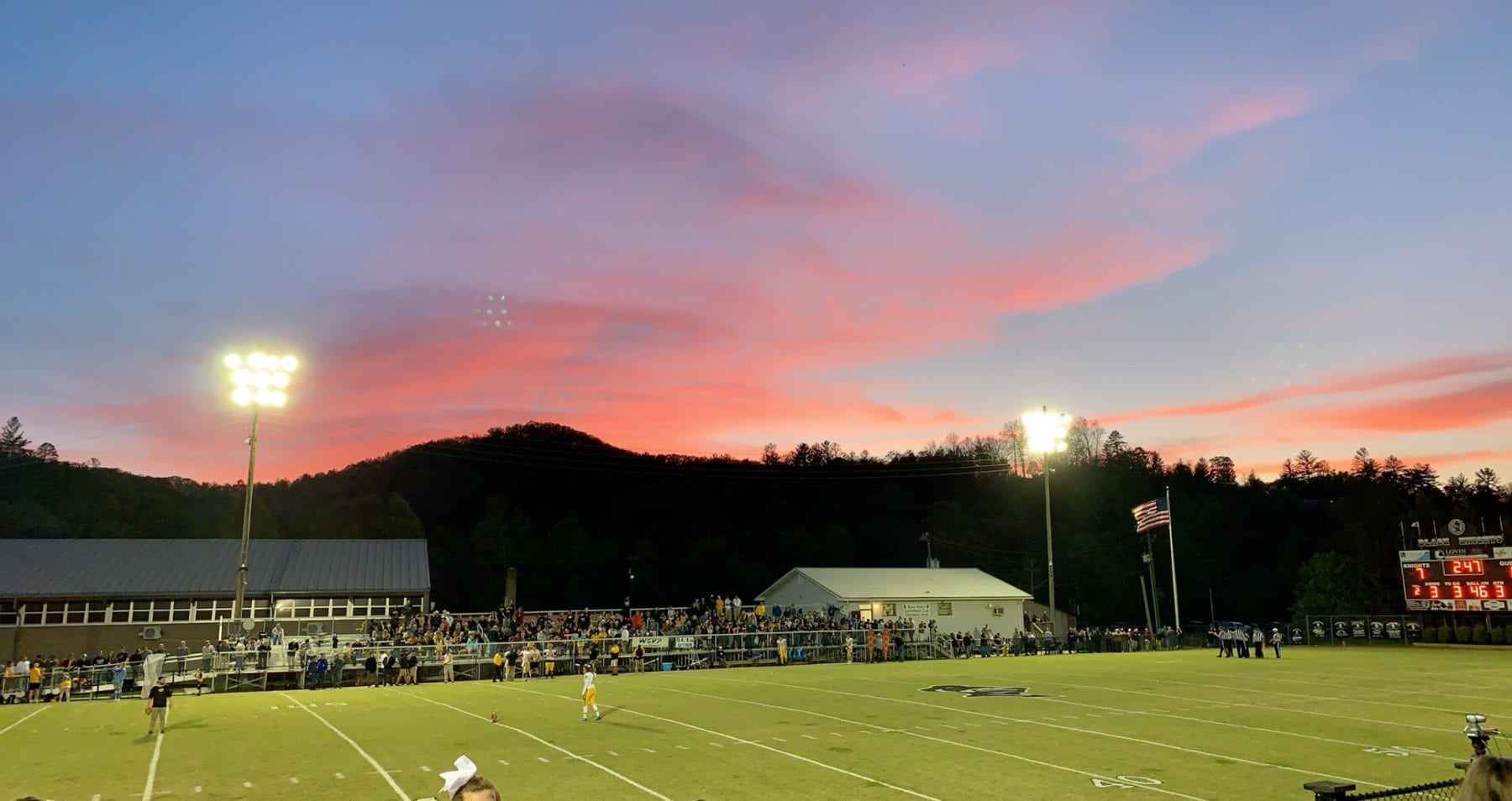 Robbinsville’s Big Oaks Stadium is a rethink-your-ranking kind of stadium. A truly historical field, it has hosted the home games of over 50 years of Black Knight football teams without ever being moved to a new location. The stadium is also directly adjacent to the original “old rock” schoolhouse of the 1900s.

The field is not the only piece of historical significance—the players themselves, often generational descendants of fellow state champions, give the Friday Night aesthetic of a Robbinsville Black Knights’ football game the aura of dominance. These boys know the magnitude of what they are playing for.

With 14 State Titles earned on its grass, the Big Oaks guarantees you a night of knock-down and drag-out, old-fashioned football, complete with rows of aged-oak trees, and a sunset view over its Smoky Mountain backdrop. Being the true embodiment of the AC/DC rock hit—Back In Black—the Big Oaks Stadium is THE must see stop of any stadium tour. 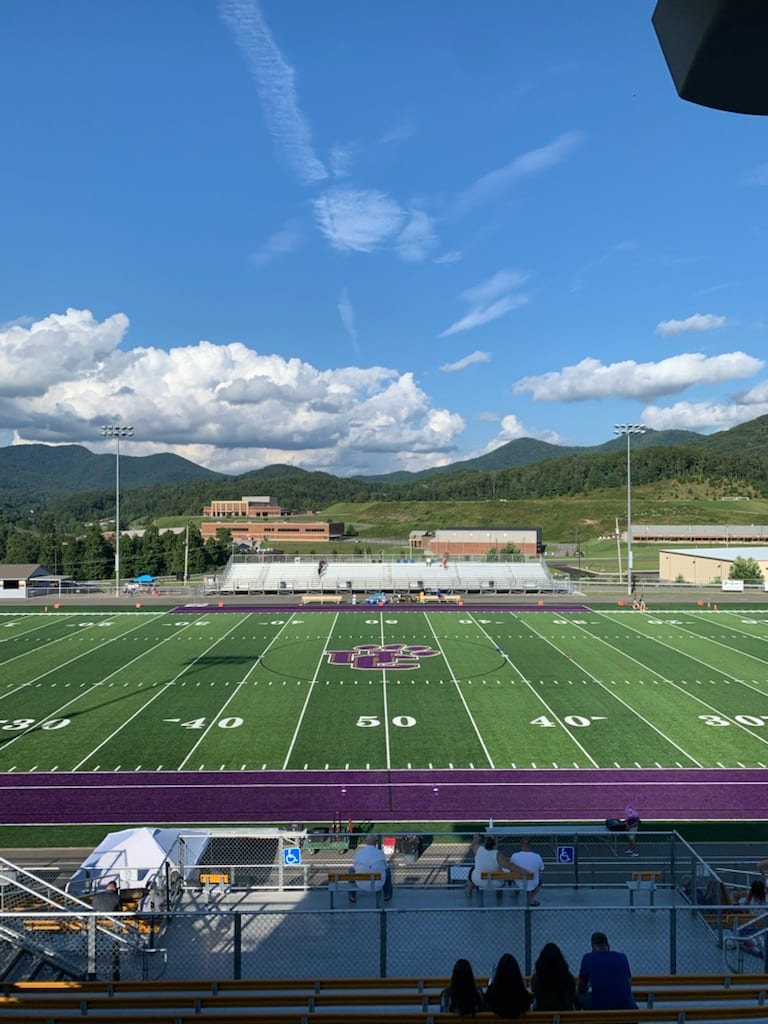 We look to Union County’s Mike Colwell Memorial Stadium a.k.a “The Mike.” There are many great high school football venues; not many, however, pack a 1-2 punch with a beautiful view and electric atmosphere like this one. 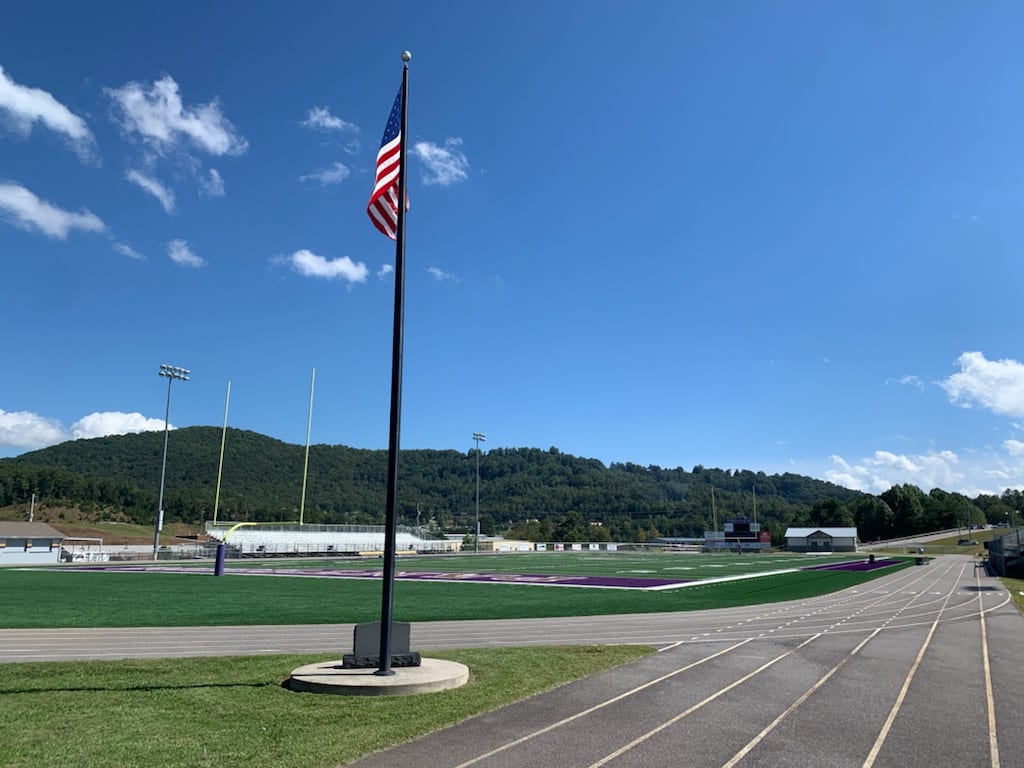 This venue offers a beautiful turf field and an even more astounding view of the crisp Blue Ridge Mountains. Mike Colwell Memorial Stadium is one that you’ll never forget, one that provides a bit of everything you could ever want on a Friday night underneath the lights! 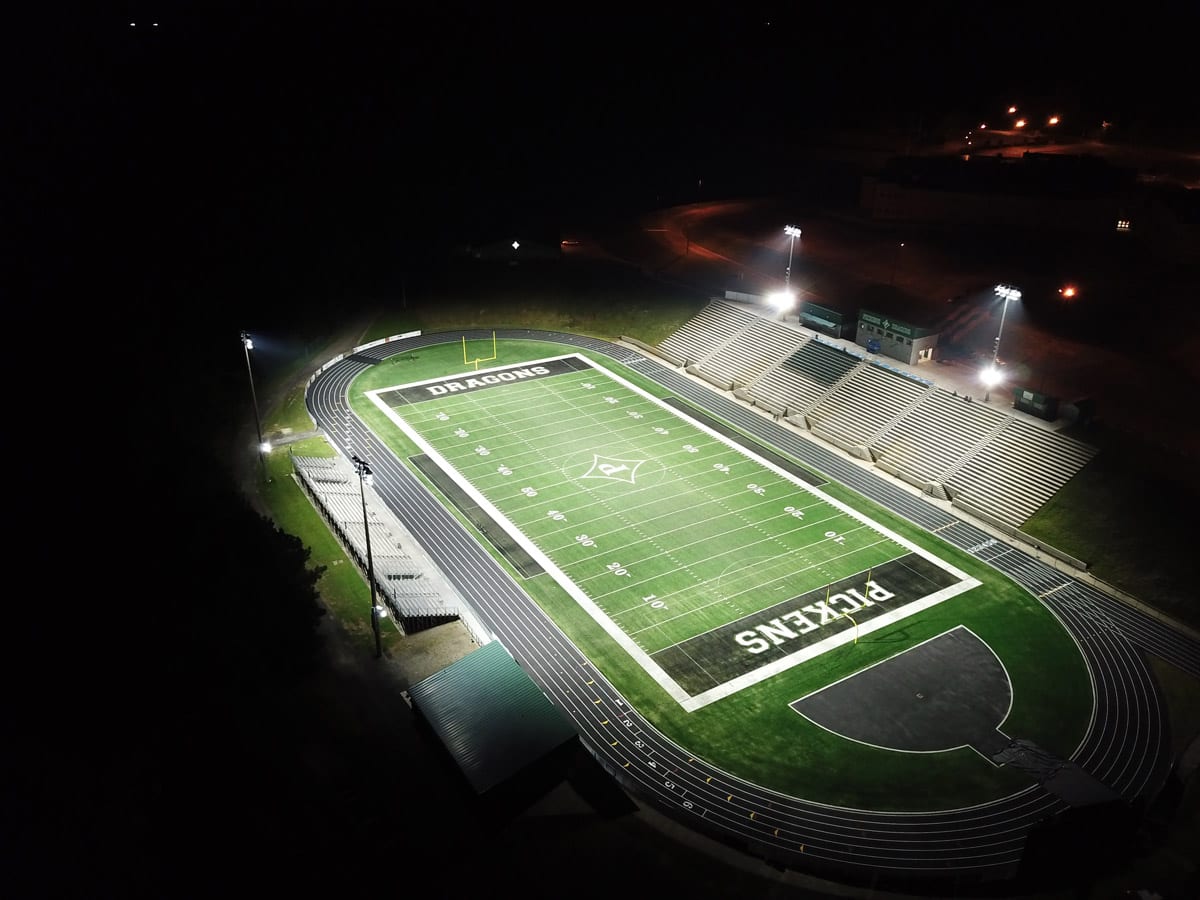 What can there be said about Dragon Stadium? The crowd, the atmosphere, the view? It starts when you pull into Pickens High School with Sharptop Mountain in the background. The sun coming down behind the trees. The Dragons walking down the hill as they make their entrance. The thing about being in a small, mountain community, when the Dragons take the field, it’s the main attraction on Friday nights. There is no doubt, that Dragon Stadium has one of the more picturesque backgrounds in the state of Georgia.