At the March 9th City Council meeting Fitts made the public aware that Mayor Donna Whitener and Council Members Mike Panter and Robbie Cornelius had been served with an Ante Litem notice on his behalf.

This legal notice comes after Panter presented a censure against Fitts, which ultimately passed. Panter, Cornelius and Whitener voted in favor of the censure while Council Members Rhonda Haight and Herald Herndon voted against.

During the March meeting Fitts briefly explained the Ante Litem notice and stated that the censure was an attempt to silence him from exposing the wrongdoing of the Mayor and Council.

Fitts went on record with some alleged violations during this meeting and FYN has obtained a copy.

***FYN is publishing the alleged violations as presented by Council Member Nathan Fitts. These accusations have not been verified.***

2011 – 2019 Georgia State Law and City Charter Violations – These are just a few that’s been put together that have happened during the 12 years the Mayor has been in office.  There are more to come as time allows as there is an extensive history of violations of both state and local laws.

Blue Ridge, Ga. – The recent censure of Council Member Nathan Fitts could lead to legal proceedings that would cost the taxpayers of Blue Ridge.

Feb. Zoom City Council meeting in which Panter brought forth the censure of Fitts.

Fitts’ personal lawyer and previous City Attorney for the City of Blue Ridge, R. David Syfan, sent an Anti Litem Notice (intent to sue) to those members of council, including the Mayor, who pursued and voted in favor of the censure.

“Honestly I sit here as a council member embarrassed to even have to discuss these items,” Fitts said informing the public that an Anti Litem Notice had been sent.

Fitts claims that there has been a series of harassment leading up to the censure in an attempt to silence him for bringing alleged wrongdoings by the Mayor and Council to light.

Through this harassment, Fitts says that he has had to defend his name and reputation over “falsified information”. Fitts stated that the council needs to focus on the City Charter and the law and quit pursuing personal vendettas.

“Not one piece of evidence. Not one fact. Not one incident that can be proven has still to this day come out,” Fitts said of the censure and added according to the City Charter, “You don’t need to censure me. Remove me from office but you better prove I did something wrong.”

Fitts spoke before the vote of censure that took place during the Feb. Blue Ridge City Council meeting. It was during this time that he read a letter from his attorney, Syfan, stating that the censure would not only be violating the City Charter but also Fitts’ civil rights.

“The due process requirements of the Fourth Amendment of the United States Constitution would require appropriate advanced written notice of the alleged violations, and evidentiary hearing in which the alleged evidence of the alleged violation could be presented, and which would allow the accused Councilmember to have the ability to be represented by an attorney at the public evidentiary hearing and have cross examination of witnesses, and review any documentary evidence.”

The Anti Litem Notice goes on to cite the Georgia “Whistleblower Law”, stating that Fitts brought to light the actions of Council Members and Mayor and that the censure is an attempt at retaliation.

“At the very least they acted negligently in attempting to impose injury upon Mr. Fitts,” states the notice, “and in the context of the whole situation, they also acted maliciously and oppressively.”

The letter asks for the council to “rescind the censure motion and publicly apologize” and states several times that Fitts does not wish to proceed with the lawsuit unless necessary.

Council and Mayor have been given one month to rescind the censure and the issue is expected to be addressed at the next Blue Ridge City Council meeting to be held on Tuesday, April 13, 2021. 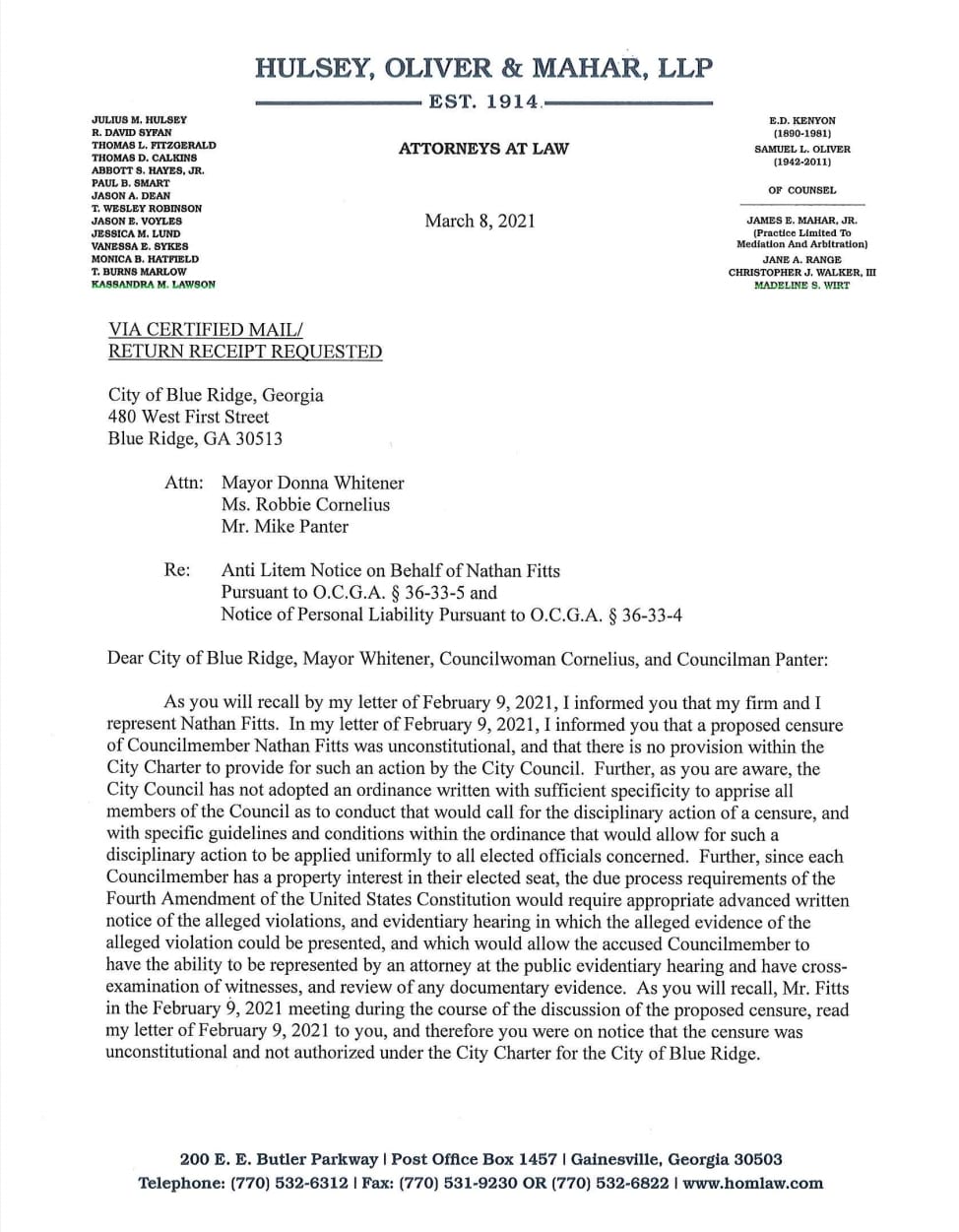 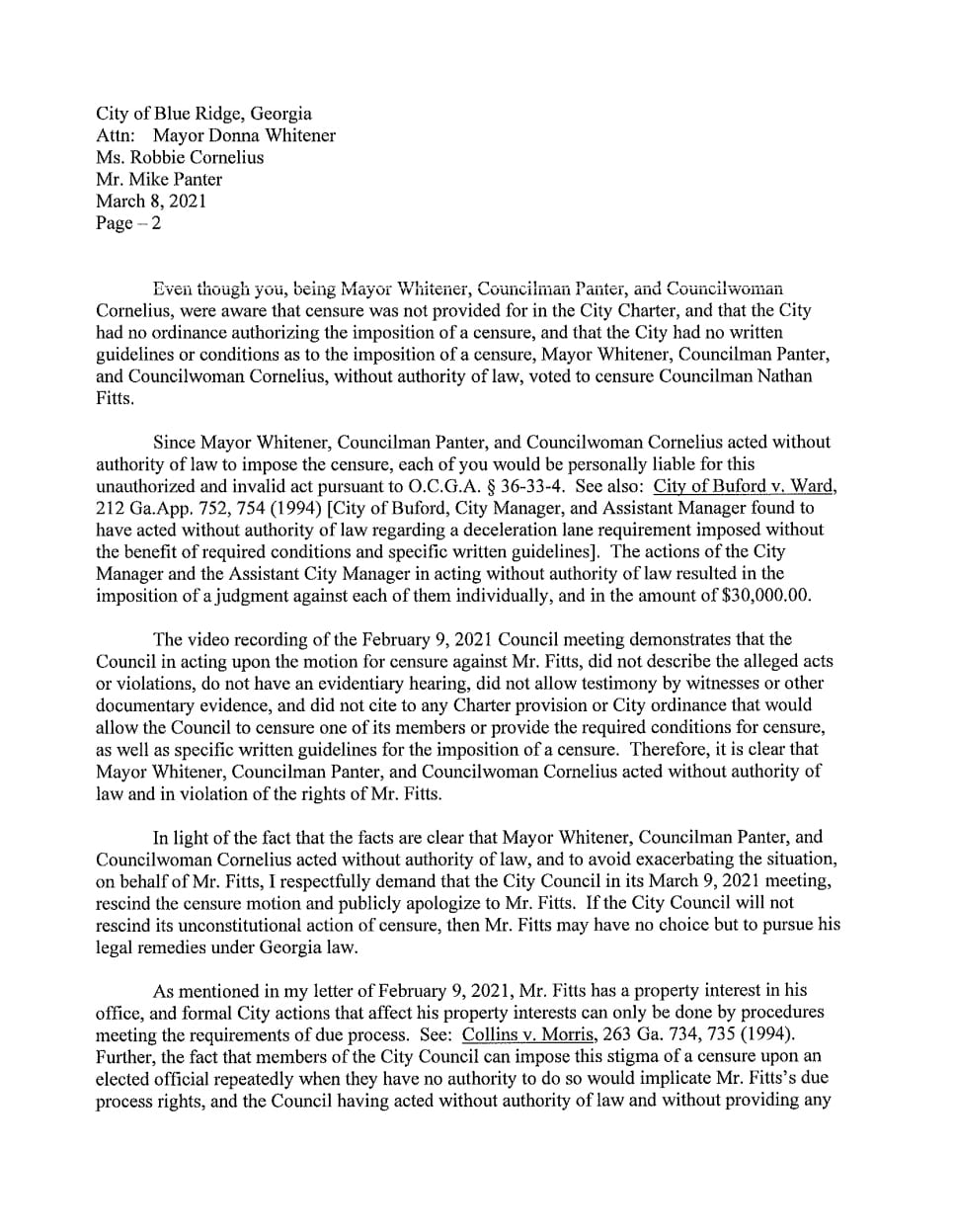 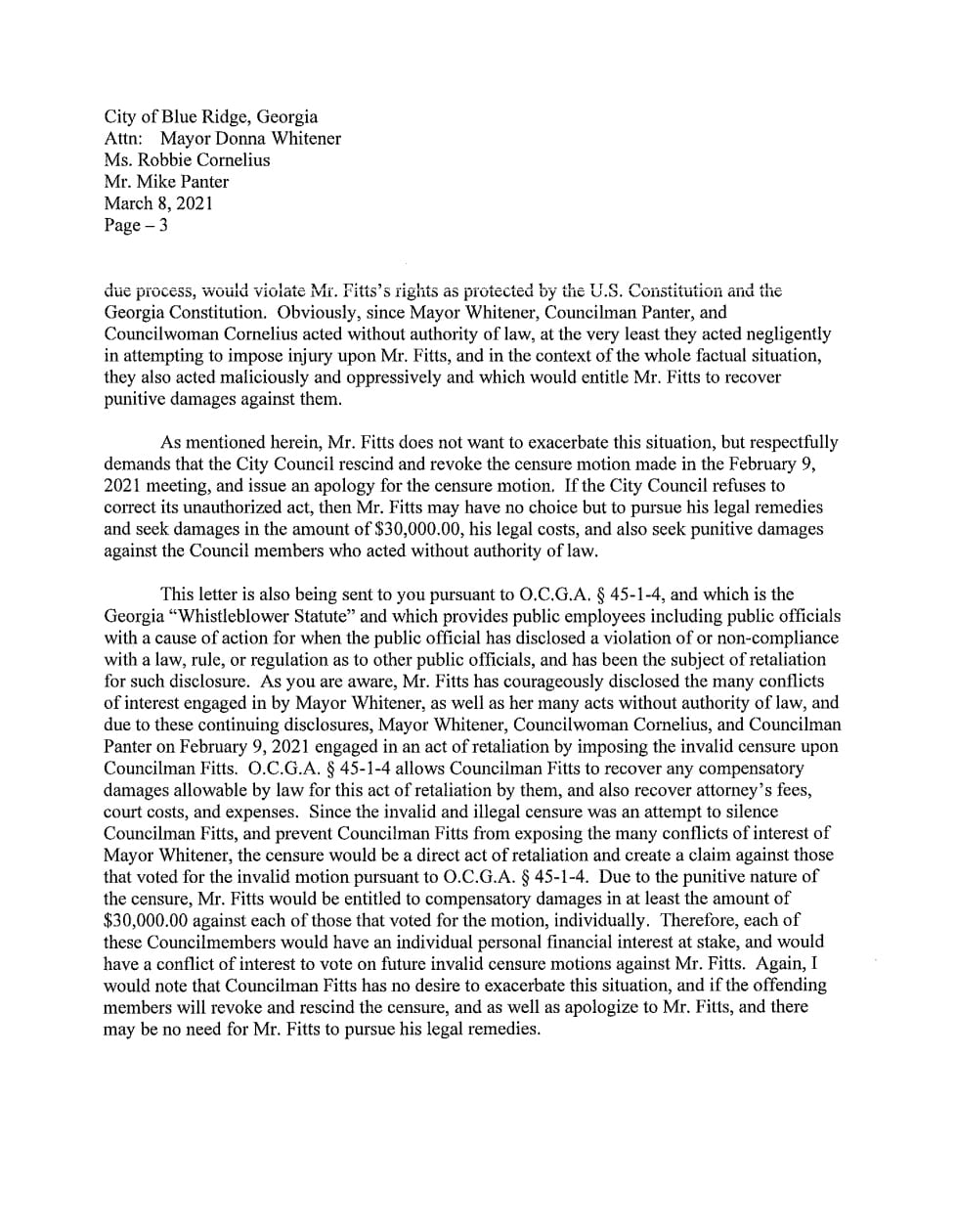 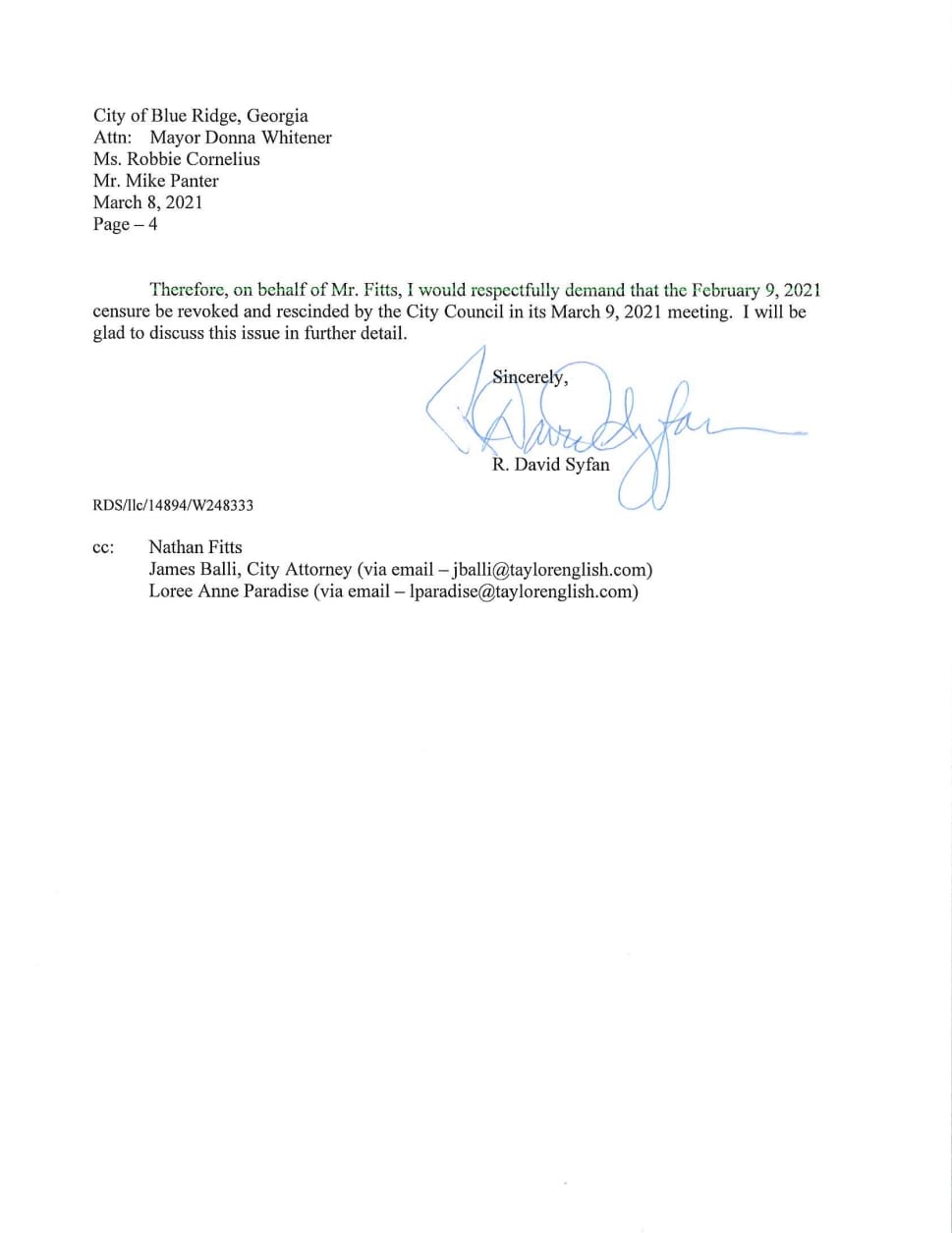