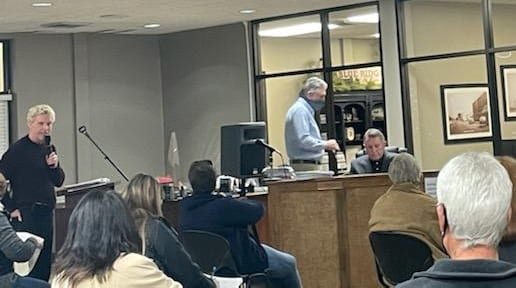 Blue Ridge, Ga. – A development that has drawn the attention of many in Fannin County has once again come to a temporary halt as the developer seeks to have land rezoned in the City of Blue Ridge to accommodate the plans.

What has become known locally as the Hastings Development is a residential development set in the City of Blue Ridge with access points to Highway 515 and College Street. The 14 acre property sits adjacent to Overlook Subdivision.

The proposed development itself has seen a number of changes based on community feedback and most recently the city zoning board gave approval for an 83 town-home high density site. The Blue Ridge City Council has final say on whether zoning of the land will be changed for the development to take place.

Developer Johnnie Hastings addresses concerns of the citizens and presents a revitalized plan for the development.

The Hastings Development has been met with concerns ranging from the possibility of high volume traffic on narrow College Street to whether the city’s infrastructure can handle the additional stress of the new units.

A vote was expected to take place at the Jan. 12 Blue Ridge City Council meeting but with last minute changes to the proposed plans, a motion was made to table the decision until next month’s meeting.

“We listened,” Johnnie Hastings, the developer of the property, spoke to the council and citizens, “What is the need in the community? What is it that you guys need in terms of housing?”

Hastings explained that the original concept for the development dating back to Jan. 2020 was for affordable housing in the $250,000 range, but after gathering further community input the design was changed to upscale town-homes in the $450-500,000 range.

“I want to do something…that’s good for the community, that we can all get around,” Hastings said as he revealed the revised plan based on community push back to the suggested 83 town-homes, “Believe it or not but that’s my heart.”

Hastings’ new plan consists of 56 freestanding family homes at 4 homes per acre. The price will still be in the range $500,000 per home.

“We’re here to compromise and bring a little unity to this project,” Hastings said, adding, “At the end of the day you’ll be very pleased with what I did up there.”

Citizens who had come to the meeting to speak in opposition or at least express concerns over the development were taken off guard with the proposed changes to the site.

The main concerns echoed by the citizens present was the need for the new changes to be approved by the planning commission or flow through proper channels, whether the city’s infrastructure could handle the added usage and traffic coming onto College Street.

“It concerns me that you would vote on this when the planning commission has not,” one citizen spoke.

Utility Director Rebecca Harkins addressed the concerns of city infrastructure stating that the city has more than enough capacity remaining in their system to handle the proposed development.

“I don’t have a position on this development,” Harkins stated adding that she simply wanted to present the public with the facts.

Harkins confirmed that the city did have capacity to handle the additional units to the system and that there are issues that need to be fixed and updated throughout the city’s infrastructure, but that those issues would have to be addressed regardless of the development adding on.

Harkins also pointed out that the developer would be financially responsible for any impacts on the system from the development to the plant caused directly by their connection.

Mayor Donna Whitener confirmed that City Attorney James Balli had sent in writing that council could vote on the rezoning if Hastings had lowered density but that it would need to go through proper channels before coming to council if the density had increased.

Council member Mike Panter made a motion to table the vote until the next regular meeting in Feb. giving the council more time to look over the proposed changes.

All council members voted in favor of tabling the vote with the exception of Council member Rhonda Haight who stated her reason as “I think we’ve kept people waiting long enough”.