Blue Ridge, Ga. – Tempers flared again as Blue Ridge City Council voted on whether it would be in the City’s best interest to put the management of municipal parking out to bid.

In a second Special Called Meeting held on Friday, May 21, 2021, Council Member Nathan Fitts proposed that the City release Executive Parking Systems (EPS) from their current contract managing the City’s parking and put the duties of parking management out to bid. 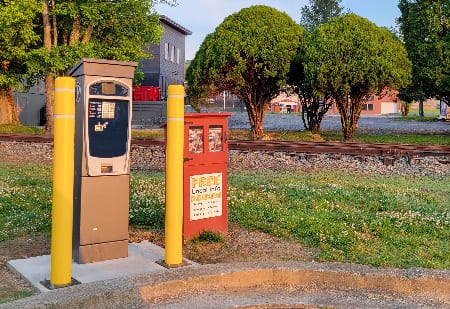 Fitts stated his reasoning for his proposal was that by not placing the service out to bid there was a look of impropriety in allowing the contract to continue without any competition and that EPS was in violation of the terms that had been agreed upon.

“The fact that this agreement only applied to special events is further confirmed by the audio of the City Council meeting in October 2019 when the council voted on this issue,” Fitts said, explaining the breach of contract.

According to Fitts the agreement with EPS was for the company to handle Special Events parking only, not day to day collections that the company is currently providing.

Council Member Rhonda Haight played audio clips from a previous meeting between City Council and the Downtown Development Authority where Fitts does clarify that EPS would be used for Special Events only.

Fitts said that EPS continuing to collect money for parking that was not from Special Events was in fact illegal.

Fitts stated, “The council has a duty to the citizens to immediately stop these unauthorized funds that are being collected by Executive Parking.”

During discussion, fellow Council Member Mike Panter referred to an email sent by City Attorney James Balli that stated “In this instance, the parking contract is not required to be submitted to the sealed bid process”.

The current contract between the City of Blue Ridge and EPS states of parking that EPS will furnish duties “as needed or requested by the City” and that EPS would collect “20% of the Net Operating income from each event, which is the total income made per event minus EPS employee expenses”.

EPS had presented the City with an updated contract changing the wording of these two statements to duties furnished would be “24 hours a day/7 days a week/ 365 days a year” and collecting “25% of the Net Operating Income each month from all City Properties, which is the total income made per month per location”.

The updated contract, however, was never approved by council.

“I know what the contract says,” Mayor Donna Whitener expressed when questioned if she understood the contract,  “It says as needed and you all needed it.”

Fitts responded to Whitener saying that her opinion is invalid, “You have a conflict of interest because you sold them a piece of property. You’re in violation of the Charter.” 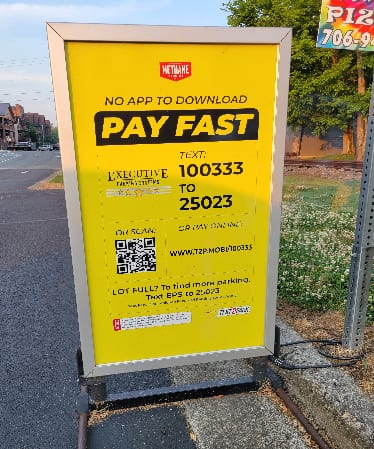 EPS signage located in municipal parking off of Mountain Street.

Shelli Wojohn, General Counsel at Valet Vault & Executive Parking Systems, also spoke up saying, “An event is every time we operate as per stated in the contract.”

“So every day is an event in Blue Ridge?” Haight questioned WoJohn.

As the meeting began to unravel, Whitener tried to adjourn but Haight said adjournment would not take place since a motion had already been made and the Council was in the middle of a vote.

Cesar Martinez, Chairman of the Downtown Development Authority, was asked his opinion since he had been present throughout much of the discussions related to the City’s parking.

“In my opinion, and I am not a lawyer,” Martinez responded, “When we let them put the parking meter up in the city municipal lot that was under the request of the City. They were doing it as needed and requested by the City.”

Panter and Council Member Harold Herndon voted against putting the service out to bid.

“They’ve done a good job. There was a need. Income has been good,” Herndon explained his position, “I don’t think the City at this time of the year can afford a delay or holding up services for any length of time.”

With two opposing votes (Panter and Herndon) and two in favor (Haight and Fitts), a tie breaking vote was cast by Mayor Whitener against bidding out parking management. Council Member Robbie Cornelius was not present for the meeting.

Haight went on record that she felt the Whitener’s vote was a direct conflict of interest due to a real estate transaction between the Mayor and EPS.

Haight also stated of EPS continuing to collect revenues everyday and not just for Special Events, “Right now in my opinion they (EPS) are taking money that doesn’t belong to them and that’s theft.”