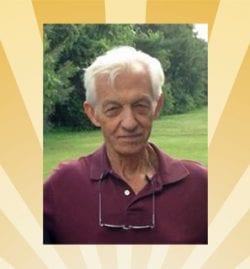 I had a family room downstairs in my house, and I had established it as my prayer closet. My favorite way to pray was on my knees with my elbows on a round footstool. One night I had just finished praying, and I went upstairs to bed. It seemed as soon as I lay down, I was taken back downstairs where I was on my knees with my elbows on the footstool praying again. Just where I was before.  All at once, an angel was standing beside me. I looked up with surprise and called him by name first, and then he called me Bob.  It is an amazing thing that without one previous thought I knew who he was and addressed him first.  Whenever you step into the Spirit realm you know things by the Spirit without learning or having ever entertained a thought about the person.  At that time, he put his arms around my arm, and I guess you would say under my shoulder and carried me to heaven. I asked him where he was taking me, and he said, “I am taking you to meet Jesus.” I yelled stop!  He said,” why Bob?”  I said I don’t want to meet Jesus.  He said,” why Bob?” and I said I don’t want to look upon his face.” Again he said, “why Bob?” and I said least my deeds should be reproved. At that point, he turned and took me back to my bedroom, but he had picked me up in my family room downstairs. I know for sure I was out of my body because on my way back to earth when we got over the top of my house I could hear the phone ringing in my bedroom. I could also see my body lying there, and I knew it had no life in it to answer the phone. I actually felt my spirit re-enter my body and I reached over and answered the phone. I still don’t understand how I left the family room downstairs when my body was upstairs in the bedroom.

Now I am so far out in left field with my life; I was just learning about the Lord, and I had not been saved very long. I wasn’t sure of anything, and now I was scared to meet with Jesus because of my deeds. I mean, I had the honored, and pleasure of meeting with Jesus, but I was in such bad shape, so I thought, at that time that I was scared to death of Him.  I think that was the scariest I have ever been in my life! I can’t quite tell you what it’s like to feel such strong FEAR at the thought of meeting the Lord Jesus face to face.  I had been seeking Him day and night, and reading the Bible. I was in the First Baptist Church, and going to every church service that I could get to. I had made it a priority to witness of Him to as many people as possible and was seeing people saved.  I was trying to learn the right way to live. I very much wanted to live the Christian life. I was on my knees praying when he took me up, that tells you I was seeking him.

Every day I was searching my heart and crying out to God and asking him what my wrong deeds were. Well finally, I thought this is what my problems must be: I was spending too much time in the Apostle Paul’s teachings and too much time learning about the Holy Spirit.  I concluded that it must be my desire for the supernatural, and I was trying to learn about spiritual gifts.  I thought maybe I took my eyes off Jesus. I didn’t know what else it could be. This had to be it. I made up my mind that I would spend all of my time just reading about Jesus and nothing else.  I can say for sure that this is a problem that you never want to have, that is being fearful of facing or being rejected by The Lord Jesus.

Well, by now this is how it looked to me: I must get my deeds straightened out, whatever they are. After trying unsuccessfully to share my trip to heaven with my wife and pastor, I made up my mind that this would be the last time I would try to share it. In the meantime; I just kept seeking the Lord, witnessing and doing everything I could that I thought would please Him. I just kept going, and I noticed the Lord began to use me in prophecy and I was hearing from Him.  I was really being used by the Holy Spirit. I was preaching, and serving in many ways, and in many places. I just moved on without ever finding an answer for the reason I was so fearful of meeting the Lord Jesus.

Some years later, I was home alone for lunch, and I thought I would get a little prayer time in. It had been over ten years, and I still did not have any answers concerning my deeds; although by now I had led many, many people to the Lord.  I had all but quit praying about it. While on my knees praying, the memory of the trip to heaven floated up again to my mind.  I asked the Lord about my visit. I asked God if spiritual gifts were the problem you could have sent someone to teach me, and I would have listened.

At that point, He took me into an open vision, and He began to reveal to me the real reason for the visit, to heaven. It was not about gifts, or about me, but about what it would be like when He returns and our deeds are not right, and we are unsaved. I saw men running for their lives, with unspeakable fear. They were trying to bury themselves under the rocks. I heard these words three times   IT’S OVER!     IT’S OVER!   IT’S OVER!  The words seemed to be the only sound on earth!  The whole sky spoke.  The whole heaven spoke. This might be the sound of the last trump!  I am not sure about that. I saw men in such fear it looked like they were running fast er than cars, trying to get away to keep from facing the Lord Jesus; somewhat like the fear, I had when I was to face Him. He was the last person they ever wanted to meet, or they ever wanted to see. It is hard to explain, but the day will come when it’s over!  THE DOOR WILL CLOSE, AND THE CHANCE FOR SALVATION IS OVER!

They were caught out in darkness. Somehow, I was made to understand that they knew everything and had a perfect understanding of Jesus, but they were better off in darkness than they were facing the light.  The light guides us, and they knew that the light would consume them. Every one that doeth evil hates the light, neither cometh to the light, lest his deeds should be reproved.” John3:20 People who have rejected or not accepted Jesus will, not only, not seek Him, but will flee from His presence in indescribable fear. They are forever condemned and know it. Just as the Lord promised the sinner, their end would be a burning hell. Please listen to me; this is not a sermon.  This is a word from the Lord Jesus speaking to you on behalf of your family, friends, and anyone you have feelings for.  I would have jumped out of heaven before I would have met Jesus face to face. The Lord let me carry this fear like an albatross around my neck for a very long time; It seemed like forever.  It was a long, long time before I could move on.  I was already going through, what seemed to be, a hell of my own. He burned this message into me to help me express, His burning love for you, your loved ones as well as the sinner. He is sending me, in his love, to make this desperate plea for your salvation.  I can say with permission from the Lord that you are hearing from Him and that this is His perfect will for you that you believe in Him and to be a witness for Him. Not one good person, if they are a sinner, and not washed in His blood, will get into heaven, even if it is your mother.  I know. I was made to carry this stigma, the fear of a rejected sinner, to talk to you today. You would be wise to listen. Not one sinner can enter paradise.  Adam only committed one sin. When God came looking for him, he was hidden behind the fig leaves. One sin condemned him, and Adam knew It without God saying a word.” So he drove out the man, and he placed at the east of the garden of Eden Cherubim, and a flaming sword which turned every way, to keep the way of the tree of life.”(Gen3:24) [ Not one sinner will ever get in]  Listen to me, this is not a might happen. I have already watched it play out. I might have seen some of your loved ones out there running from the burning flame. If, my friend, you will get one person saved in your lifetime it will be the greatest achievement of your life. This message should make every Christian want to be a preacher. Together let’s take this message to the world by sending it to as many people as you can and encouraging them to keep it moving forward. I would love to know if you are on board with me.

When He comes back clothed in a vesture dipped in blood and a two-edged sword in His mouth, I don’t think it will be a good time to try and make a deal.  Absolutely no loopholes here. May we  all come together around this scripture,( Acts 26:18) Jesus said,”Paul,  turn men from darkness to light and from the power of Satan to God.”

Regardless of how much you have now the only thing you can take to heaven is people.

The Apostle Paul said,” And to you who are troubled rest with us, when the Lord Jesus shall be revealed from heaven with his mighty angels, In flaming fire taking vengeance on them that know not God, and that obey not the gospel of our Lord Jesus Christ: Who shall be punished with everlasting destruction from the presence of the Lord, and from the glory of his power. (2Thess 1:7-9) That they all might be damned who believed not the truth but had pleasure in unrighteousness. (V: 12)