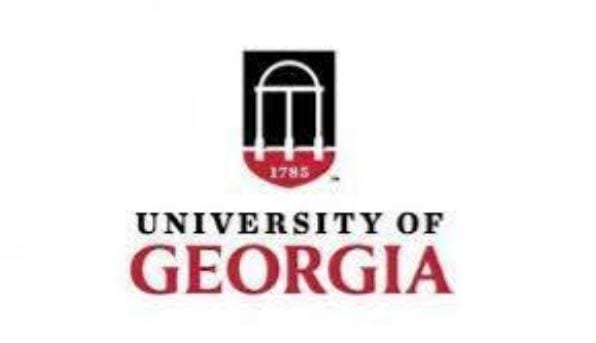 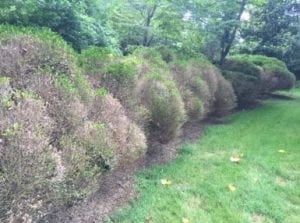 I have often heard the phrase the lull or the calm before the storm and I think that’s where we are right now.  Even though it’s still cold, the days are getting longer and some of us are anxious to get outside and work in the yard but before you rush out to prune or plant, let’s take a look at boxwoods.

Boxwoods are one of the most popular foundation plants in Southern landscapes, but they are under attack from a disease that is killing many of the plantings.  Boxwood blight, a new ornamental disease affecting plants in the boxwood family, may soon be heading to a landscape near you.  While boxwoods are known to be fairly tough landscape plants, this pathogen is sure to leave a path of destruction wherever it shows up.

The fungus causing boxwood blight, Calonectria pseudonaviculatum, has been found in landscapes throughout Georgia. Boxwood blight was first identified in the U.S. in 2011 and has since been found in 20 states. While the pathogen can be spread in a variety of ways, it mostly travels between states and regions through the movement of infected plants. Dwarf English boxwoods are highly susceptible to the disease, as are the American, or common, boxwoods. Cultivars of the Korean and Japanese boxwoods appear to be slightly less susceptible however none of the commercial boxwood cultivars are immune to this disease. Other plants within the Buxaceae family, such as pachysandra, also can be affected.

According to Jean Williams-Woodward, University of Georgia Plant Pathologist, initial symptoms include circular, tan leaf spots with a dark purple or brown border. Often, black lesions, or sores, are also seen on the stems. As the disease progresses, infected leaves become tan and fall from the plant. Rapid defoliation is a symptom of boxwood blight. Shady environments, humidity and warm, wet environments tend to favor disease development. Leaves must remain wet for 24-48 hours for disease initiation to occur. While the fungus can be killed at higher temperatures (seven or more days at 91 degrees or hotter), it has the ability to produce structures (microsclerotia) to survive adverse environmental conditions.

The disease is spread primarily through infected plants and debris, such as leaves. While the white tufts of sticky spores aren’t spread by wind, they can readily be transported by animals, shoes, hands and tools (such as pruners and shovels.) Exclusion is the best control option available. Do not introduce the disease on tools and pruners. Disinfect tools frequently. Mix 2½ tablespoons of Lysol Concentrate Disinfectant (5.5 percent) per gallon of water and pour into spray bottles. Spray tools and allow them to dry for maximum effectiveness. Other products such as bleach and isopropyl alcohol can be used too.

If boxwood blight is detected in the landscape, the plant and debris need to be bagged, secured tightly and disposed of in a landfill as quickly as possible. Leaf debris can be bagged, buried or burned on-site. Do not compost. This disease cannot be cured with fungicide treatments. And because of this disease, homeowners are urged to consider other foundation plants to plant this spring. For more information on this boxwood concern, contact me in the Gilmer County UGA Extension office. Karol Kelly, County Extension Agent, in the Bibb County UGA Extension office provided some of the information for this article.