BLAIRSVILLE, Ga – Office of Insurance and Safety Fire Commissioner John F. King announced today that a Union
County woman was killed and four others were injured in an accidental fire at the Rivers Edge RV Park around 1:00
p.m. on Tuesday, September 22.

The explosion involved a camper being used by an elderly couple as a permanent residence and was the result of a
disconnected propane gas line. The explosion occurred when the couple attempted to turn on the gas and ignite the
kitchen stove.

Union County Fire Department and EMA (UCFD/EMA) received the initial call at 12:45 p.m. of a camper explosion with people still inside the vehicle. UCFD/ EMA stations one, three, and four were on site to stop the fire.

Once they arrived, they saw the unit completely engulfed in flames and realized five people needed emergency care. Two of the injured were the couple inside the camper.

“Because of the explosion, the wife received burns on over 90 percent of her body, and the husband also received very severe burns,” said Commissioner King. “Both were airlifted to Grady Memorial Hospital. Unfortunately, the wife died overnight.”

The other three in need of care were neighbors who attempted to rescue the couple. One of those neighbors
managed to pull the elderly woman from the fire. This primary rescuer was also airlifted to Grady Memorial Hospital
while the other two neighbors received treatment at a local hospital.

“If it was not for the bravery of these neighbors, both the husband and the wife may not have survived Tuesday’s
[camper] explosion,” said Commissioner King.

Preliminary investigations performed by Commissioner King’s State Fire Investigations Unit, the Union County Fire
Department, and the Union County Sheriff’s Office indicate that the propane gas company followed all proper
procedures and is not at fault. Therefore, the cause of the fire is believed to be accidental. 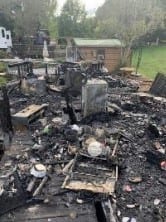 For the sake of those involved and their families, FYN won’t be publishing the names of the RV owners.

All the authorities involved ask for prayers for the victims and their loved ones. This fatality marks the 61st fire fatality in Georgia this year.