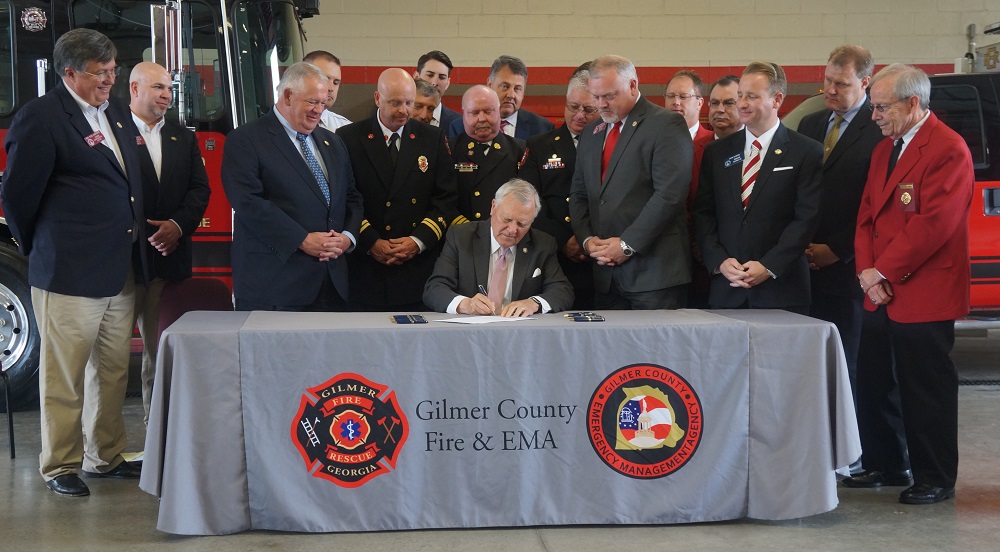 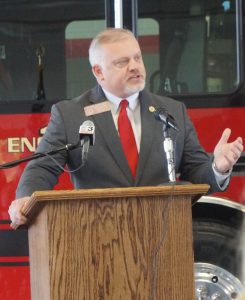 Joined by several officials including Georgia House Speaker David Ralston and Senator Steve Gooch, author of the bill Micah Gravley, District 67 Representative, opened the ceremony by speaking about the two year effort to bring the bill to this point. Gravley related his interactions with two firefighters, Frank Martinez and Brian Scutter, who he said were the honor of the Bill as they fought for and spoke with legislators to get the bill passed, as well as the appropriateness to have the signing in Scutter’s home station in Gilmer County. Scutter was also mentioned by Speaker Ralston who said he had made a promise to Brian that he would give all that was in him to bring this day about. Turning to face Scutter, Ralston said, “I kept my promise.”

Governor Nathan Deal, who originally vetoed last year’s Bill 216 called the new House Bill 146 an “innovative and great solution to the situation.” Deal said the Bill provides relief for firefighters by providing a different method for compensation and money for treatment and care for firefighters who contract cancers during their work. Gravley thanked the Governor for his support of, as he called it, a “better bill.” 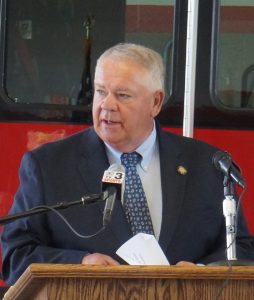 The sentiment was echoed by Speaker Ralston who said, “We have arrived at a better solution. By requiring a local government to provide insurance to our firefighters for certain types of cancer, the firefighter can skip the process of litigating a worker’s comp claim. This will allow the firefighter to focus on getting better and recovery rather than having to worry about legal bills and depositions and hearings.”

FYN caught up with Speaker Ralston and Governor Deal to ask them to elaborate on why the bill is better, comparative to last years Bill 216. The Speaker replied saying, “This uses a Health Insurance Model as opposed to a Workman’s Comp model which means instead of having to make a claim and perhaps go through a court type process to get benefits and income, Firefighters in this case will file a claim just like health insurance.” 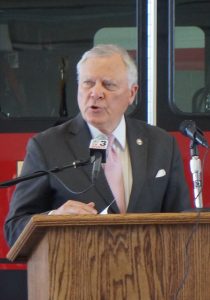 Governor Deal also spoke on the insurance versus workman’s comp comparison saying it was an awkward and “adversarial way of deciding whether or not compensation is owed.” Deal went on to say the newer Bill is a much better solution “to provide insurance coverage that will define benefits and give some flexibility as to deciding the compensation that will be given to firefighters.”

More than Senators and Congressman came to see Deal sign the Bill, though. Several representatives from neighboring and local emergency services attended the event including Gilmer’s own Director of Public Safety Tony Pritchett who said the Bill “gives you a sense of protection… You can lay your head down and sleep better at night knowing that if you contract cancer because of the job, there’s some protection that will take care of you and your family.”

For more on the Signing of House Bill 146 watch the full ceremony below or find more Photos in our Album: