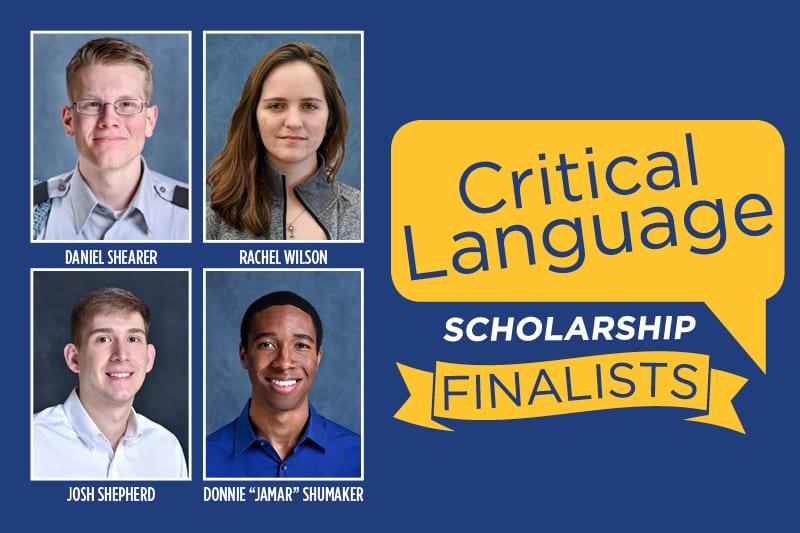 When University of North Georgia (UNG) freshman Daniel Shearer first learned he was a semifinalist for the Critical Language Scholarship (CLS), he was reluctant to celebrate. The member of UNG’s Corps of Cadets was excited, but he wasn’t a finalist — until now. “I feel very fortunate to have won,” he said. “I honestly didn’t have high expectations, but I am glad.”

Shearer and three other UNG students were glad to learn March 1 that they were selected as CLS finalists. The scholarship program is a fully-funded overseas language and cultural immersion program for American undergraduate and graduate students. Its goal is to broaden the base of Americans studying and mastering critical languages and building relationships between the people of the United States and other countries.

Out of UNG’s eight semifinalists announced in January, the four finalists are:

Of the remaining semifinalists, all four were named alternates. They are:

“In addition to our students’ qualities of determination, perseverance, and persistence, this success also reflects the encouragement they receive from their mentors throughout the university,” she said.

The four finalists and four alternates also mark an increase in UNG students selected. Last year, three were selected as finalists, and two were alternates. UNG had one finalist and one semifinalist for both 2016-17 and 2015-16 academic years.

Lin said more students are encouraged to apply to scholarships such as CLS after hearing of previous winners.

“I predict we will see more applications and winners in the future because of a growing commitment to scholarships on both the part of our students, faculty and staff,” she said.

Shearer, a freshman from Suwanee, Georgia, plans to use the study abroad experience as a springboard for his future.

“I intend to commission through UNG, and as I am pursuing a degree in East Asian studies, I would love to have a duty station over there,” he said, adding the CLS program will give him an advantage. “Through this scholarship, I will have a greater fluency in Japanese through immersion in the culture that comes through living and working there.”

Students interested in learning more about nationally competitive scholarships should contact [email protected] for more information. Students wanting to learn about funding and programs to study abroad may visit the Center for Global Engagement website.