Each hearing took place in a packed, socially distanced courtroom with a total of roughly 50 uneasy citizens looking for answers about the sudden increase to their taxes.

“I have dedicated the past 20 years to making Union County a place we can all be proud to call home,” Commissioner Paris stated, “Very few times have I had to increase the property taxes. It gives me a sick pain to my stomach, and I had rather do anything than raise property taxes.”

The proposed increase is necessary to balance the county budget in 2021. Previously, Paris has striven to keep Union County’s millage rate one of the lowest in the state.

“We’ve been just about straight flat for four or five years, and now we’ve got this blip to try to catch up. I’ve tried to keep your taxes so low for so long that I’ve really overdone it,” Paris stated.

The county-portion of millage rate will increase by 1.226 mills or 19.98 percent over the rollback rate. A tax rate of one mill represents a tax liability of one dollar per $1,000 of assessed value.

The state of Georgia calculates taxes the following way:

The millage rate in 2006 was 6.65. The overall increase since then was .7 mills, and it was the highest rate in Union County until now. It has fluctuated up and down in that time.

The 10 a.m. meeting lasted over an hour and a half.

Union County does try to keep property taxes equally allocated between salaries and operating expenses at an almost 50/50 ratio. However, the property tax revenue for 2020 was short, nearly $1 million due to increased costs and state budget cuts.

In the past, property values increased enough to pay the extra funds needed to cover county expenses. The county is in the middle of a property reassessment, which might put the county in a position to lower the millage rate in 2021. Once homes and real estate receive new appraised values, it should improve the budget digest. Additionally, the revaluation won’t necessarily result in property values increase. Some will receive at a higher reassessment, and others won’t.

“The problem: By working so hard over the past four years to keep our taxes as some of the five lowest [in Georgia’s in 159 counties,] I have strained our budget. At the same time, the prices of almost everything we use has increased. The state of Georgia cut budgets last year, and this year, in most cases, by 15 percent. The cuts mean the county will have to pick up several of those increases,” Paris explained to the crowded courtroom.

Impact to the Budget

Areas of county government and services that will be impacted by state budget cuts are the library, health department, and court system. These departments cost around $70,000 for the county to run. The full impact of the state budget cuts remains unclear.

The state also cut the road department’s local maintenance and improvement grant (LMIG), which goes toward road improvements by $104,000. The county also has to budget for a 20 percent match to receive this grant. 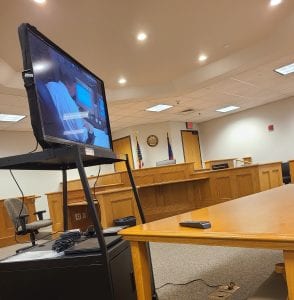 To help everyone understand how property taxes are levied, appraised, and collect, a short video from ACCG played to the audience.

Without the proposed increase, the county would have to let go of 35 employees. Currently, a total of 160 employees work for the county.

Paris added that they need “this cushion to fall back on in 2021,” and operating budgets will undergo cuts in every area possible.

Additionally, employees’ medical insurance continues to sky-rocket. The sheriff office, including deputies and jailers, have received pay increases to keep the staff in Union County. The pay increases must be kept competitive with other counties in the area. However, Paris praised Sheriff Mack Mason for keeping expenses down in other areas, such as jail board fees.

Areas of increased expenses in 2020

*The $700,000 increase in health insurance from two years ago marked the start of some financial issues.

Another expense the county must budget for is the new gun range going up on Hwy. 180. The proposed cost is around $2 million. However, if built to Department of Natural Resources (DNR) specifications, the government organization should reimburse the county, up to 75 percent.

Turnout for the 5 p.m. public hearing, which was followed by the 6 p.m. county meeting.

Perhaps, one of the biggest reasons for the property tax increase is to replenish and protect the fund balance. Currently, Union County has one and a half months in reserves. GASB directs counties to keep two to five months of operating expenses in reserves.

“I am very sorry; we simply have no choice. If we let our reserve funds get any lower, it will negatively impact our county credit rating. [It] could create real problems, in the future, if emergency funds were ever needed to be borrowed,” Paris added.

During the public hearing, several concerned citizens raised questions about the recent purchases of the Hill Property for a little less than $750,000 and the Old Shoe Factory for $800,000.

Commissioner Paris explained that the Old Shoe Factory was purchased using SPLOST funds, and the county previously budgeted for the Hill Property. Neither, according to Paris, was a factor in the property tax increase.

At the end of the day, the county continues to be in good financial health, but it must take measures in 2020 to maintain it’s good standing for future generations.