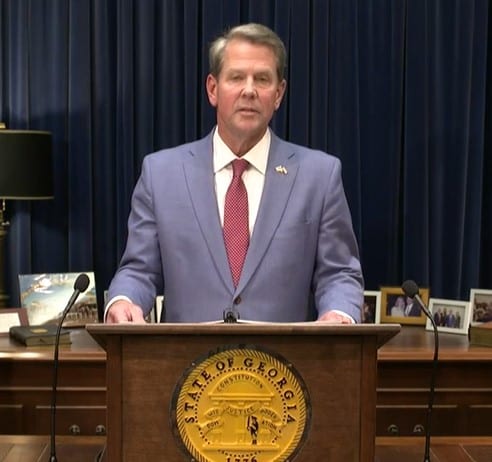 ATLANTA – Election reform is coming to Georgia after Governor Brian Kemp (R) signed the SB 202, Election Integrity Act of 2021, mere hours after it landed on his desk.

During his televised remarks about the legislation Kemp stated, “With Senate Bill 202, Georgia will take another step in ensuring elections, accessible and fair.”

He thanked Chairman Barry Flemming and Chairman Max Burns and Senate and House Leadership for their work on the issue.

“After November I knew like so many of you that significant reforms to our state elections were needed. There’s no doubt there were many alarming issues with how the election was handled and those problems understandable led to the crisis of confidence at the ballot box here in Georgia,” Kemp said.

Kemp was the first to call on Raffensperger to audit the absentee ballots and did so four times.

SB 202 replaces signature match with a state-issued ID requirement and Kemp believes this will streamline the absentee ballot process. He added the bill makes it “easy to vote and hard to cheat.”

Weekend voting will be expanded to two mandatory Saturdays and two optional Sundays. Ballot drop boxes will be secured 24/7 and security paper is required for ballot authentication.

“November 2020 election saw a 350 percent increase in the use of absentee ballots,” Kemp explained. “This obviously led local election workers to have to process far more ballots using a time consuming, labor-intensive, and at times arbitrary process.”

Georgia Democrats have been vocal about their opposition to the bill, calling it a power grab for a declining party that doesn’t know how to connect with a changing Georgia.

The 90-plus page bill can be read on the General Assembly site.

President Joe Biden (D) spoke about the election reform legislation sweeping Republican-controlled state legislatures. He called the bills “sick” saying it made “Jim Crow look like Jim Eagle.” He promised to do everything in his power to stop the reform efforts.

Other states with election bills in process are Arizona, Michigan, Nevada, North Carolina, Pennsylvania, and Wisconsin.