GILMER COUNTY, Ga. – An Executive Session late Thursday night at the end the Gilmer Board of Commissioners Regular Meeting saw the board return with formal motions and approvals that moved one department director affecting three people.

As the meeting’s regular agenda ended, the board approved a motion for executive session and said they anticipated action. Upon return, Chairman Charlie Paris made a motion to move Public Works Director Jim Smith to Planning and Zoning Director, a position held by Karen Henson.

With the motion, Paris explained that current Planning and Zoning Director Karen Henson would take on a role as Smith’s assistant in the department. In Public Works, the former Assistant Director Ryan Steingruber will step up as the new Director. 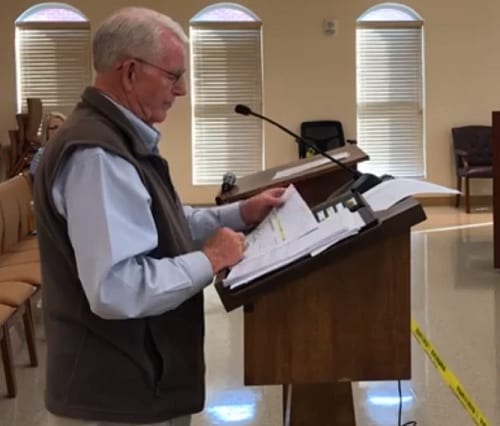 Post 2 Commissioner Karleen Ferguson took a moment to thank all three people for their service in the county. Ferguson stated, “I’ll say thank you all for your service. Jim, Karen, Ryan, much appreciated. This has been a difficult, challenging year. Now that we’ve got a little adjustment, we’ve got the dream team back.”

This is not Smith’s first time in the Planning and Zoning Department as he did previously hold positions within it as it used to be Planning and Community Development in the early 2000’s. Smith was formerly the Director of this department.

Likewise, as the newly appointed Public Works Director, Steingruber is not unfamiliar with his position either as he stepped in to the role when Smith dealt with health and family issues in recent years. Steingruber not only stepped in to deliver updates and reports to the county in meetings, but served as the Director in formal capacities with contracts and other day to day operations.

With the motion seconded and unanimously approved, these changes will be taking place immediately as the department undergo the transitions to their new directors.