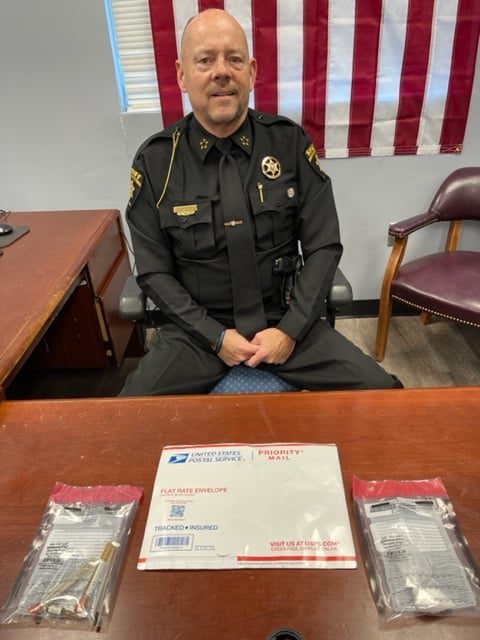 The Towns County Sheriff’s Office has received information through various sources that drugs are being delivered through the US Postal Services to Towns County.
On December 6 , 2021 the Cherokee County Sheriff’s Office received a call to report that a North Carolina State Trooper has turned in drugs which had been received by mail to a residence in Young Harris, Georgia.
The Georgia Bureau of Investigations (GBI) and US Postal Inspectors were called to assist with the investigation.
The investigation revealed on November 6 , 2021 an envelope was delivered to a residence in Young Harris containing drugs. The drugs were addressed to a female living in the residence, who was in drug rehabilitation.
The mother of the female opened the envelope and discovered the envelope contained drugs. She contacted and delivered the drugs to a North Carolina State Trooper. That agent took the drugs to the Cherokee County, NC Sheriff’s Office. The Cherokee County Sheriff’s Office contacted Towns County and turned the drugs over to Towns County Sheriff’s Office.
The drugs were field tested and discovered to be vials and needles loaded with fentanyl, cocaine, and heroin.
The two local postal mangers were notified regarding the issue of dangerous drugs were passing through their facilities.
Fentanyl is a dangerous drug that is 50 to 100 times stronger than morphine.
Fentanyl can be absorbed through the skin and hands, therefore just handling Fentanyl can cause an adverse medical effect on the individual.
Towns County Sheriff Ken Henderson stated the sheriff’s office is taking this case very seriously.
He is also concerned about fentanyl and heroin being in our area and wanted to make our community aware.
This is currently an active investigation into the origin of this package.
Cherokee County Sheriff’s Office Georgia Bureau of Investigations (GBI) North Carolina State Trooper Towns County US Postal Services