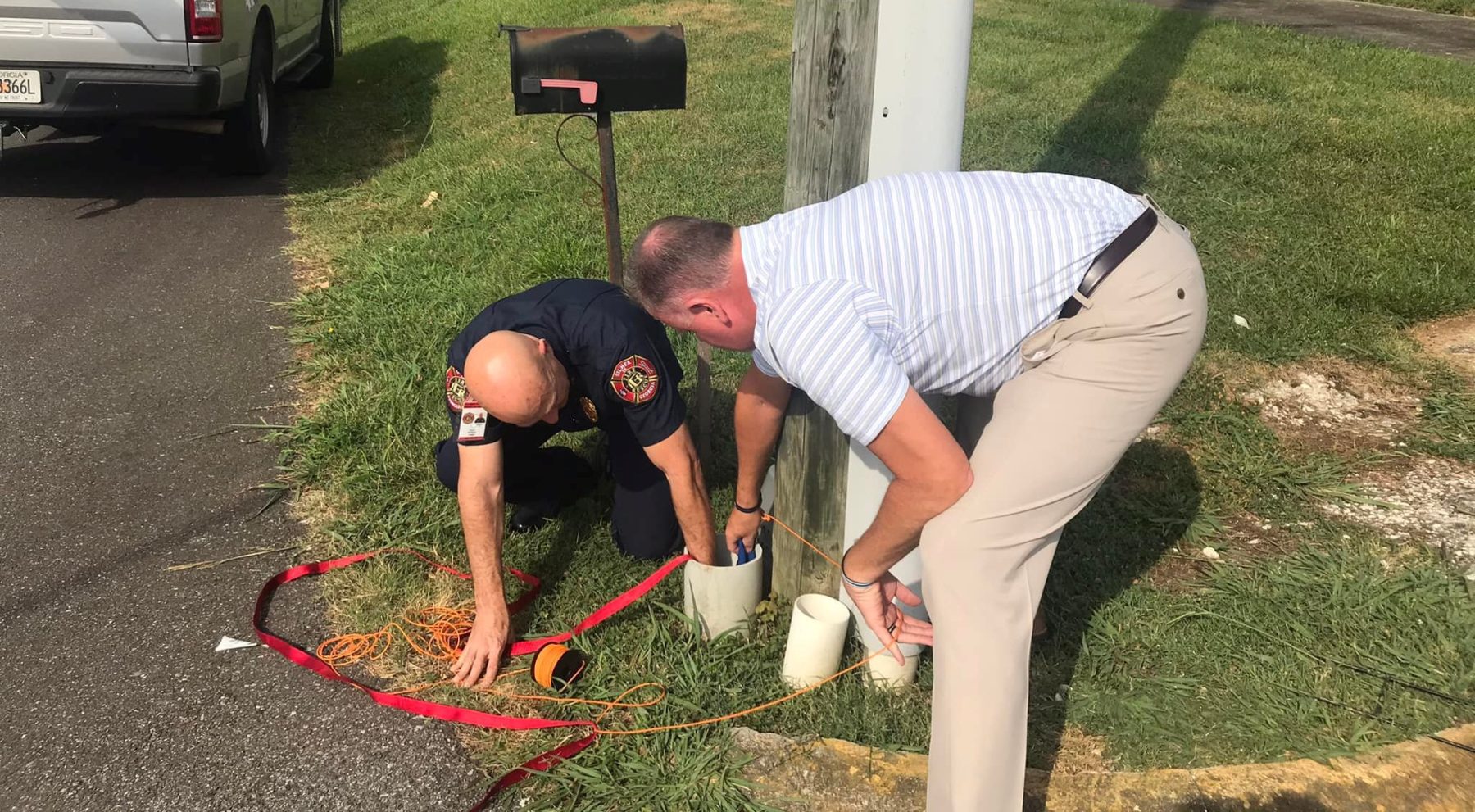 ELLIJAY, Ga. – In a day reaching back to times gone past and idyllic tv shows with firemen retrieving a kitten from a tree, Gilmer saw a minor operation that reached major officials at the county courthouse today. A rescue operation was undertaken involving Fire Chief Daniel Kauffman, Sheriff Stacy Nicholson, Maintenance Director Eric Playford, and Animal Shelter Director Daniel Laukka standing in the heat with several county employees and, eventually, employees from Georgia Power. Instead of up a tree, this kitten was trapped underground. 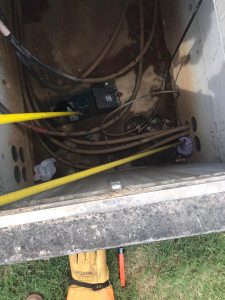 Pushed into an in-ground electrical box, the kitten was able to be lured into a cage and rescued.

All of this effort came for a rescue operation of a small, black kitten who had fallen into an underground pipe. According to the Sheriff’s Office, “It all started with a plea from a courthouse customer to help a trapped kitten.” Those who helped discovered the stranded, starving kitten that had found its way into an empty pipe for future underground power lines.

So began two hours of efforts to first lure the kitten to the vertical section of pipe and then to push it towards an underground electrical box with open space and a lid. Animal Shelter Director Daniel Laukka told FYN that when he was first called, he had no idea what he was driving to. Once on scene, he said that the heads of the different departments and offices quickly tried to entice the kitten back to where they assumed it fell in so she could be pulled out. However, the pipe had a three-feet long vertical section, thus the idea to encourage her to latch on to a towel.

Later, the plan changed as Georgia Power was able to help officials access a large electrical box with enough open space for a trap to be lowered in. It was then that they pushed the kitten through the pipe with cables, a towel, and a small camera inside the pipe. Once in the concrete box, the plugged the pipe and had the trap waiting with some canned food for bait. Laukka said at that point, it didn’t take long at all for the kitten to enter the trap and be rescued.

Named “Piper” for its discovery location, the black kitten is now at the Gilmer County Animal Shelter recovering. As if this story didn’t have a happy enough ending, Laukka confirmed that the citizen who originally reported hearing the kitten when entering the courthouse said they would also like to adopt Piper. 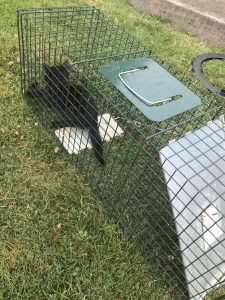 Officially rescued from her time in underground pipes for future electrical cables, the newly named “Piper” is recovering at the Gilmer Animal Shelter.

Laukka said it is a real blessing to have her adopted out so quickly as she would require a cage all to herself. He noted that the Animal Shelter has checked the kitten for a chip or any sort of identification, but it appears to be a stray. He said, “One of the citizens that live near the courthouse has brought us about five kittens over the last few days from that area. So, it could be from that litter.”

Although scared at first, the kitten has responded well to interaction so far, he noted it seems very young and, with its good response, doesn’t seem to be going feral. He noted that if you can get hands on kittens before roughly 8 weeks old, they can be tamed before getting too feral. He also stated that situations like this, with animals trapped in underground areas, are very rare in the county, making this a bit of an adventure for both the animal and the humans looking help it.

When asked if she would have been difficult to adopt due to superstitions and thoughts on black cats, he said that many people also hear these rumors and specifically look for black cats to help balance out any difficulty due to fur color. But, the shelter is currently at about 85 percent capacity in the middle of “cat and kitten season.” In May, the Animal Shelter took in over 150 cats and kittens and June has seen another 100.

Continuing operations to share animals with other shelters for adoption are helping, but he noted that progress is also being made on the county’s expansion at the shelter. Laukka said he has been finalizing the architectural process and hopes the county will be bidding the project out in the coming months with construction possible to begin this fall. This project was reported on in February 2021 when major donations from citizens kickstarted the process to first plan, then design, and now go through architects for the bid specifications, and soon to be constructed.