EAST ELLIJAY, Ga. – Gilmer County’s Board of Education made Dr. Ridley official last night with a unanimous vote during their monthly work session for their new superintendent.

Dr. Hal Brian Ridley was named the finalist of the school system’s Superintendent search during a special called meeting on June 26, 2021. According to the Board of Education, “The Board voted unanimously to name Dr. Ridley as the single finalist for the position and announced its intention to name him as Superintendent after the 14-day period of public notice.” 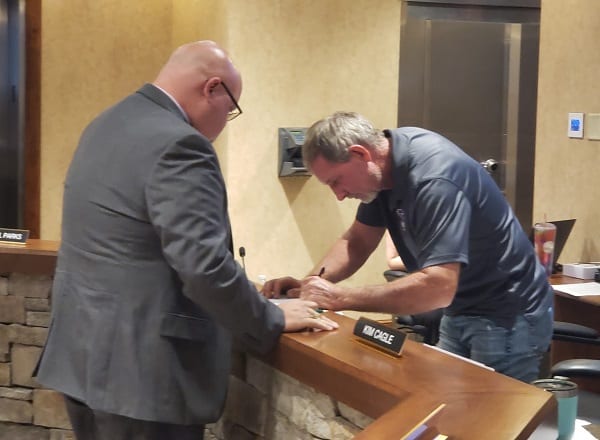 Nearing the end of July now, the Board is trying to get Dr. Ridley in and ready before the start of the school within the next two weeks. Most teachers are returning and final preparations are coming into play this week in the school system such as teachers rooms being moved into Clear Creek Elementary today.

Normally, most votes don’t happen until the boards Thursday meetings as it is the regular session of the government entity.

Now approved, Ridley is likely to be taking his first meeting this Thursday as his first official meeting as Gilmer’s Superintendent. The board is also holding a reception on Thursday at 5 p.m for Dr. Ridley and to allow the public time to meet and speak with him before their Regular Meeting.

Dr. Ridley and the Board signed the contract after the meeting, right before the board retreated into their usual executive session for personnel.

Dr. Ridley stated, “I would like to thank the Board for this opportunity. And thank you to Kim Cagle, she has been very welcoming as I try to get myself oriented to this new job. I’m looking very forward to working with all of you and we’re going to do some great things in Gilmer County.”