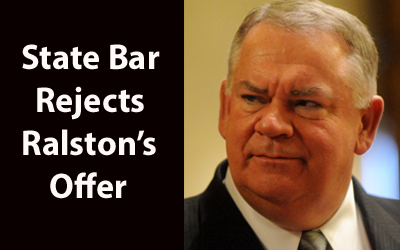 Today, FYN learned of a State Bar recommendation to proceed to trial against David Edmund Ralston,Georgia State Speaker of the House.

Under this complaint Ralston faces charges of 10 counts of violation of State Bar Rules of Conduct. For more information on these allegations and filings read our past stories on this topic including David Ralston Faces Disbarment and Mr. Ralston has Acknowledged Unintentional Mistakes.

Former Governor of Georgia, Roy Barnes has filed a Petition of Voluntary Discipline on behalf of Mr. Ralston stating references to alleged violations and offering voluntary disciplines to accompany those violations.

The Petition for Voluntary Discipline notes that though the document does include admissions of guilt, they are for the process of arbitration and not admissible in court.

Barnes answers the ten counts of violation with his own view of the violation and offers his idea of the most severe appropriate rule of discipline for each violation. These alleged violations involve a case of one, Mr. Chernak.

In the Petition Barnes states “There is no clear and convincing evidence of a violation” in response to eight of the charged counts.

Admission is given regarding rule 1.8(e) when, as stated, Ralston provided “interest free advances to the Chernaks in 2010 and 2011,” and 1.15(II)(b) when he comingled his personal funds with those of clients.

With regard to Rule 1.15(II)(b), Barnes states that none of the Sanction Standards could apply to Ralston’s situation, but on a more general basis, Standard 4.1 Failure to Preserve the Client’s Property could apply. Barnes again suggests Admonition as the most sever appropriate discipline under Standard 4.14 as listed in the document on pages 41 and 42.

Both of these Disciplines would amount to little more than a public “slap on the wrist” for Ralston.

The Georgia State Bar wasted no time in their response, saying that the speakers petition was “inaccurate, incomplete, or immaterial.”

Standing in firm opposition to Ralston’s Petition for Voluntary Discipline, the State Bar’s Response stated, “the petition fails to contain sufficient information concerning the admissions of fact and the admissions of conduct, and should be rejected.”

The State Bar calls for an evidentiary hearing “where the proof of each party can be tested”, calling it “essential.”

Now these two documents will go before the Special Master, Mark Dehler, and he will either accept the State Bar’s Recommendation and this issue will go to trial, or he will accept Ralston’s Petition and send a recommendation to the State Supreme Court for a final decision.

Don’t miss a much deeper inspection of these documents on Good Morning From The Office tomorrow, July 16 at 7:00 AM.