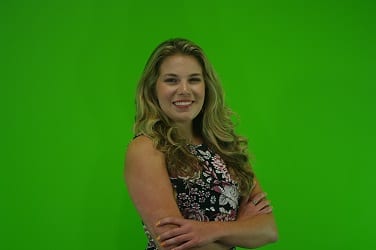 About five years ago I told my dad, who is one of my biggest fans but also one of the most blunt people you’ll ever meet, that I wanted to be the first female head coach in the NFL.

I was expecting some drawn-out response about how I didn’t know enough about football.

“Because you can’t go in the men’s locker room,” he said flatly.

Ah, I hadn’t thought of that.

That was my senior year of high school, and never did I think I would be where I am now.

I grew up an UGA fan; my grandad attended college there in the ’60s and the red and black passed down into my veins. I learned to spell Georgia by chanting the fight song in my head (I still do subconsciously whenever I have to write it out!) I had an UGA cheerleader outfit and one of my baby pictures has me holding a stuffed bulldog. One of my nana’s fondest memories is of dancing around the living room with me as an infant when Georgia scored a big touchdown against Georgia Tech. I’ve never considered myself athletic, but I believe I owe a lot of my passion for sports to Papa Skip and Nana. 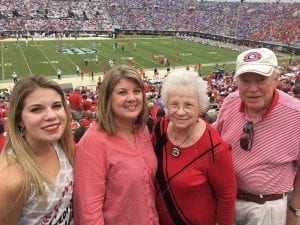 Papa Skip, Nana, my momma and I at the Georgia v. Florida game in 2017

Flash forward a few years and the first time I stepped foot on a sideline was as a cheerleader for the 8th grade Mill Creek rec football league. Cheerleading was not for me, and within a year I traded in pom poms for a six-foot flag pole as a member of the Mill Creek High School Colorguard.

In high school I lived for Friday night lights, and I have many fond memories of screaming myself hoarse for the Hawks while in the stands with the marching band. It was a well-known fact that I was the most spirited person in the band when it came to football, and while my coach would be yelling at me to pay attention during our warm-ups I’d be busy trying to figure out how much yardage we’d gotten from the last pass.

I guess my fellow classmates took note of my love for the game as well, because they voted me their Homecoming Queen my senior year. That is still one of my all-time favorite memories from high school- hearing my name called while standing on the 50 surrounded by family and friends. 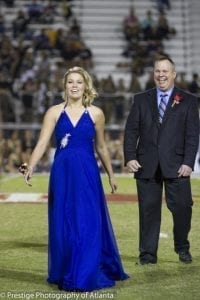 My senior year of high school I was elected Homecoming Queen. This was the moment after my name was called. Look at my dad’s face!

I graduated from Mill Creek in 2015 but I had a hard time staying away from Markham Field. The University of North Georgia doesn’t have a football team, and Mill Creek decided to get really good the year after I left (this was the fall of 2015, the year they got knocked out by Colquitt County one round before the state championship.)

In the spring of 2016 I heard of an opportunity to work for the Gwinnett Braves, Triple-A minor league affiliate for the Atlanta Braves. Needing a summer job but hoping to avoid retail, I took it. I spent the next two summers as a Guest Relations Representative scanning tickets and welcoming fans. In addition to my already-sound knowledge of football, I learned all I could about America’s favorite pastime and a new love was born.

I spent one more summer at Coolray Field before graduating college, and this time it was as a member of the Promotional Team. That may be the most fun I ever had at work. Our team set up the on-field promotional games, signed up contestants, sold 50/50 raffle tickets and overall worked to make sure people had a good time. I certainly did- the memories I made with my team that year will forever be some of my favorites.

For a while I told people that I wasn’t interested in sports journalism, but the Lord as he fortunately often does had other plans. I got the opportunity to intern with the UNG Athletic Department my senior year of college, and I left Gwinnett County to plant some roots in the North Georgia mountains. 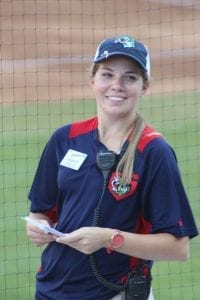 I worked for the Gwinnett Braves (now Gwinnett Stripers) for three seasons. Here I’m in my third season as a member of the Promo Team.

Two months ago I still wasn’t certain that I’d ever work in sports again, but when baseball started back up I knew I couldn’t live without it. I was fortunate enough to find an opportunity to apply with FetchYourNews.com, and even more fortunate to get an offer. And here we are.

I don’t tell you all this to brag on my accomplishments or give you some long-winded biography. I want to be just as much a part of your community as you all are now a part of my daily life. When I come to your sideline I want to know each of you and each of you know me. Part of being a great sports reporter is establishing a relationship with your team and community. Part of that relationship includes establishing trust, and how can you can trust someone if you don’t even know them?

One of the biggest reasons I keep working in sports is because of the the communities they create and the people I get to meet. There’s something about having a team to rally around that gets inside of you and never leaves. The people I have met so far and the connections I have made are priceless and will forever be a part of who I am and a big reason for why I do what I do.

So here’s to the journey ahead, and here’s to memories that are yet to be made and the relationships yet to be formed. I can’t wait North Georgia!