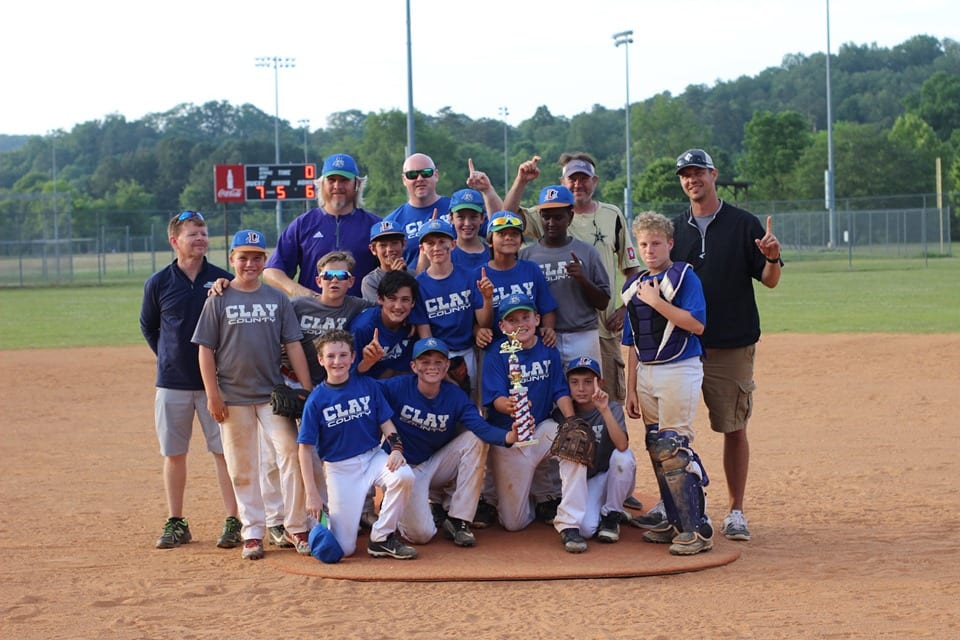 This past weekend I had the opportunity to cover the 12U Pre-All-Star Diaz Classic at Fannin County Park as an associate broadcaster and producer.

I would like to begin this post by saying how impressed and amazed I was at the talent of these young men who played in the tournament. I love baseball and I’ve spent several summers working around it, but most of my experience comes from the minor league level.

With that being said, I know I watched the stars of tomorrow this weekend.

To elaborate more on what I meant by that previous statement, here are some plays that I witnessed: Noah Gutillo, who is #7 for the 12U Gilmer Bobcats, hit two inside-the-park home runs during the first two games the team played. Owen Nolan, #7 for the 12U Towns County Indians, made an awesome barehanded catch at shortstop for an out at first base. Dawson Devane, #14 for the 12U Clay County Swarm, threw out the runner at third from catcher to get the final out that won his team the championship. 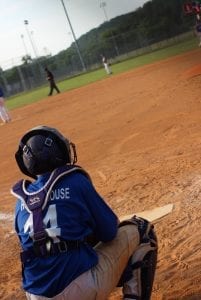 Dawson Devane, #14 for the Clay County Swarm, played an awesome game on Sunday!

The list goes on and on. There were plenty of singles, several doubles and even a few triples. A couple more home runs were sprinkled in there as well. There were fantastic plays with great catches at shortstop and the outfield. Certainly there never was a dull moment. You would think a team was defeated early on, but they would give it all they had to either close the gap or come back completely.

The very first game we covered on Thursday was between the Fannin County Rebels and Clay County Swarm. By the end of the first inning, Fannin had put nine runs on the board. My head said there was a slim chance Clay County could come back, my heart secretly hoped they would (I love a good comeback), and my eyes hadn’t seen anything yet. By the end of the game the final score was 11-10 Clay County. This game set the standard for what the rest of the weekend would look like, and Clay County would go on to win the championship.

When I say that this game would set the standard for the rest of the weekend, I mean that there were numerous games where one team would pull ahead but the other would fight to come back. BKP and I agreed that you couldn’t look away from these games, because if you did then you’d miss something important.

One thing that I love about youth tournaments along with watching the future talent are the communities that come out to rally around them. There were numerous times I would look behind me to see a ballpark full of families and fans. People of all ages came out to see these guys give it their all. Families set up tents to stay cool in the summer sun, grandparents brought seat cushions to stay comfortable, and younger siblings chased each other through the crowds. It was a beautiful thing. 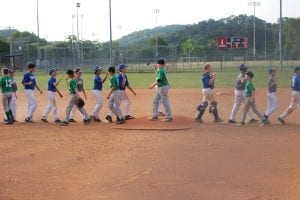 One of the things that I love most about youth league baseball is the community it creates- even of players from the opposing sides!

Going back to the athletes, I could tell that each of them took their games seriously. Another great thing about this age and level is seeing where the players are as far as developing their skill set. At this age level, runners are allowed to take lead offs from base and steal before the ball gets over the plate. Pitchers are continuing to develop their deliveries and the umpires call balks. Each player is also tailoring their batting stance to themselves. They’re only a couple of years away from being in high school, and for those who are really serious then it’s time to start thinking about college and getting recruited.

I think from the examples above it’s not hard to figure out why I decided to call this post not-so-little league. These guys work hard day in and day out to put it all on the field. For those who see it from the outside looking in, there’s not much to a bunch of twelve-year-olds hitting a ball around. But for those on the inside looking out, there’s not much GREATER than that.