Atlanta Braves pitcher Sean Newcomb is currently on the IL after taking a line drive to the head on Saturday. But not just any line drive- a 102 mph ball directly off the bat.

My first reaction to hearing about the hit was shock- then amazement when I saw that not only did he take the hit, he walked off the field by his own power. I don’t know about you- but that probably would’ve been it for me.

Reports came out that Newcomb was doing well with no serious symptoms. However as we know from recent research with concussions and head injuries, it’s better not to take any chances.

Obviously the incident with Newcomb was not from a foul ball, but it has gotten me thinking about my experience in baseball with foul balls. Baseball fans are no strangers to ducking from a stray ball every now and then. 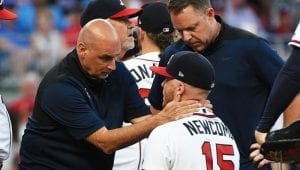 Sean Newcomb getting checked out by Braves staff after getting hit on Saturday. Credit: Yahoo! Sports

So the question I want to pose here is this: what added precautions should parks take, if any, to make baseball safer?

It’s not a new topic. It’s a question that everyone asks any time there’s another incident at a game where a fan is struck by a foul ball or flying bat. In fact, in May of this year a foul ball off the bat of the Chicago Cubs center fielder Albert Almora Jr. hit a young girl in the stands. Although reports said that the girl seemed alert and in no serious danger, the incident caught the attention of the MLB and Almora Jr. was visibly upset the rest of the game.

According to ABC News, in December 2015 the MLB issued recommendations that parks put up netting which “shields from line-drives foul balls all field-level seats that are located between the near ends of both dugouts … and within 70 feet of home plate.”

However based on the wording of this quote, the netting was only a recommendation.

During my time at Coolray Field with the Gwinnett Braves there were countless a times a foul ball made its way into the stands. I can recall several times where fans were hit, and even one instance where a staff member got struck. I myself got bopped by one the year before I started working there, although it was not near as fast or serious as some of the others.

Some park-goers might argue that netting or other protective barriers should be ALL around the park. Others will say that obvious places, like right behind home plate or down along the baselines, should be shielded but others are not necessary.

As for myself, I agree with the latter position. If you’re sitting directly behind home plate and a foul ball comes off the bat and directly behind the batter, there’s nothing you can do in the almost-instant amount of time that ball comes at you. In this case, not only is netting the best solution, it’s the ONLY solution.

Same goes for, at least in my opinion, along the baselines where dugouts are located and at least halfway down depending on the ballpark. If memory serves me correctly at Coolray Field the netting stops at the end of the dugouts and gives fans along the rest of the baseline a good view at a safe distance. 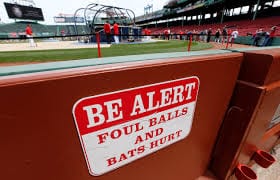 An example of a warning sign at Fenway Park. Love the directness! Credit: MPR News

Of course no matter where you sit at a ballpark there’s always a slight chance a ball can reach you. That’s why at most, if not all, ballparks there’s a warning to fans before the game to watch for balls and other flying objects. At SunTrust Park there are signs placed up in the stands with a similar warning. Such is the best way to protect parks from legal trouble while not angering fans who want to view a game without a net in front of them.

Another point to consider is that if there is netting all around a field, there’s not a chance to get a game ball. Baseball fans of all ages love to catch a ball at the game, and it’s even more thrilling if it comes off the bat of your favorite player. There’s no need to sacrifice a great game experience for a potential safety concern.

The best way to protect yourself at a baseball game is to be aware of your surroundings. I’ll admit that part of the reason I got hit was because I wasn’t paying attention. I understand that even the quickest human reflexes may not be enough to stop a flying baseball. But I was not doing myself any favors by not watching the ball when it came our way. If you purchase a ticket in an area where there is not protection, then you are responsible for being aware of the potential threat.